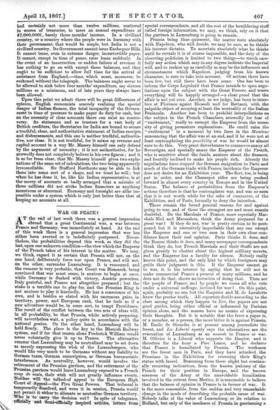 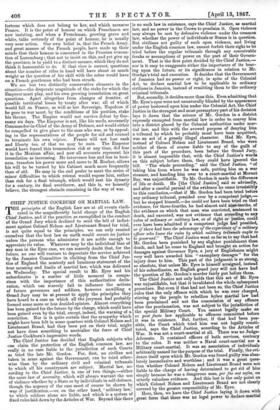 Airthe mid of last week there was a general impression broad that a great Continental war, a war between a France and Germany, was immediately at hand. At the end of this -week there is a general impression that war has either been averted or is indefinitely postponed. Never- theless, the probabilities depend this week, as they did the last, upon one unknown condition—the view which the Emperor of the French takes of his interest in the matter. We may, we think, regard it as certain that Prussia will not, on the one hand, deliberately force war upon France, and will not, on the other, surrender Luxemburg. It is rimioured, and the rumour is very probable, that Count von Bismarck, being convinced that war must come, is anxious to begin at once, while Germany is flushed with victory, Austria powerless, Italy grateful, and France not altogether prepared ; but the stake is a terrible one to play for, and the Prussian King is not anxious to play it hurriedly. He has a conscience of his own, and is besides so elated with his enormous gains in territory, power, and European rank, that he feels as if a new 'adventure would be, in some sort, to tempt Providence. The result of the conflict between the two sets of ideas will, in all probability, be that Prussia, -while actively preparing, 'will nevertheless wait, a policy quite in accordance with the national genius. On the other hand, Luxemburg will be held firmly. The place is the key to the Rhenish Railway system, and if for that reason alone Frederick William would never voluntarily give it up to France. The alternative rumour that Luxemburg may be neutralized may be set down 'as merely expressing the wish of the Luxemburgers, who 'would like very much to be Germans without any liability to German taxes, German conscription, or German bureaucratic Interference. As neutrality, however, would involve the 'retirement of the Prussian garrison, and the retirement of the Prussian garrison would leave Luxemburg exposed to a French coup de main, their wish will not greatly influence events. 'Neither will the talked-of appeal to the European High -Court of Appeal—the Five Great Powers. That tribunal is temporarily dissolved, and were it in -session, Prussia would not permit it either to alienate or neutralize German territory. Who is to carry the decision out ? In spite of telegrams, Officially and demi-officially inspired articles, letters from special correspondents, and all the rest of the bewildering staff called foreign information, we may, we think, rely on it that the garrison in Luxemburg is going to remain.

Prussia being thus quiescent, the matter rests absolutely with Napoleon, who will decide, we may be sure, as he thinks his interest dictates. To ascertain absolutely what he thinks until he reveals it is of course impossible, and the dirty of the observing politician is limited to two things—to watch care- fully any action which may in any degree indicate the Imperial will, and to reckon up as carefully as may be the influences and circumstances which Napoleon, judging from his known character, is sure to take into account. Of actions there have been few, but still there have been some. One has been to inform the Corps Legislatif that France intends to open nego- tiations upon the subject with the Great Powers, and trusts everything will be happily arranged—a clear proof that the affair is not yet over. Another, as we judge, has been to inter- fere at Florence againt Ricasoli and for Rattazzi, with the palpable object of securing at least the neutrality of the Italian Peninsula. Another has been to prohibit interpellations on the subject in the French Chambers, avowedly for fear of "excitement," really to exempt the Emperor from the neces- sity of giving premature explanations. He could calm the " excitement " in a moment by two lines in the Moniteur announcing that the affair was at an end, and if he were not at least contemplating the possibility of war he would be almost sure to do this. Very great disturbances to commerce annoy all Sovereigns, and specially annoy the Emperor of the French, who is sensitive about the funds, anxious about the finances, and heartily inclined to make his people rich. Already the negotiations have stopped the German emigration to Paris and much of the German trade with France, incidents the Emperor does not desire for an Exhibition year. The fleet, too, is being put in' order, and the Chassepot rifles are being pushed forward in almost every country in Europe and in the United States. The balance of probabilities from the Emperor's actions therefore is that he contemplates war, and war so soon that it is not worth while for the sake of commerce, of the Exhibition, and of Paris, formally to deny the intention.

There remain the broad general reasons for and against going to war, and of these the strongest are and must remain doubtful. Do the Marshals of France, more especially Mar- shals Niel and Macmahon, think the Army prepared for a great war? If they do not, war is pretty certain to be post- poned, but it is excessively improbable that any one except the Emperor and one or two men in their own close con- fidence know their real opinion. Paris thinks it does, and the Bourse thinks it does, and many newspaper correspondents think they do, but French Marshals and their Staffs are not given greatly to chatter about the highest military secrete, and the Emperor has a faculty for silence. Nobody really knows this point, and the only hint by which foreigners may guide their judgment is this. If the Emperor cannot go to war, it is his interest by saying that he will not to make commercial France a present of many millions, and he does not do that, shows no intention of doing that. Then are the people of France, and by people we mean all who vote under a universal suffrage, inclined for war ? On this point, again, probably no one but the Emperor and M. de Lavalette know the precise truth. All reporters decide according to the class among which they happen to live, the papers are not good guides, being either official or influenced by Parisian opinion alone, and the masses have no means of expressing their thoughts. But it is notable that the freer a paper is, or a member, or a person, the more bitter it is against Prussia. M. Emile de Girarclin is at present among journalists the freest, and La Liberte openly says the alternatives are the evacuation of Luxemburg as an amende to France or war. M. 011ivier is a Liberal who supports the Empire, and is therefore for the hour a Free Lance, and he declares that France is humiliated by Prussia. The workmen are the freest men in Paris, and they have attacked the Prussians in the Exhibition for crowning their King's statue with laurel. Reasoning from these slight but continu- ally recurring indications, from the known jealousy of the French for their position in Europe, and the known soreness of the Army at the unavoidable humiliation involved in the retreat from Mexico, it is reasonable to believe that the balance of opinion in France is in favour of war. It is the more reasonable, from the sudden and very remarkable change in the mode of describing the probable cause of war. Nobody talks of the value of Luxemburg, or its relation to Holland, but only of the insolence of Prussia in garrisoning a fortress which does not belong to her, and which menaces France. It is the point of honour on which Frenchmen are now insisting, and when a Frenchman, growing grave and white, talks seriously of the point of honour, he is usually very near action. Our own belief is, that the French Army, and great masses of the French people, have made up their minds that their honour is concerned in the Prussian evacua- tion of Luxemburg ; that not to insist on this, and yet give up the province, is to yield to a distinct menace, which they do not think it honourable to do. If that view is correct, questions about the number of rifles in hand will have about as much weight as the question of his skill with the sabre would have on a French gentleman who had been struck.

We see but two distinctly conservative elements in the situation—the desperate magnitude of the stake for which the Emperor must play, and his own growing irresolution on great questions. Apart altogether from changes of frontier, of possible territorial losses by treaty after war, all of which would fall on France, as well as her Sovereign, Napoleon if he goes to war must, by the conditions of his position, stake his throne. The Empire would not survive defeat by Ger- many six days. The Emperor is not, like his uncle, necessarily Commander-in-Chief of the Army of Defence, and would either be compelled to give place to the man who was, or by appeal- ing to the representatives of the people for aid and counsel to terminate his own re'gime. France will not lose rank and liberty too, of that we may be sure. The Emperor would have feared this tremendous risk at any time, did fear it in the Mexican affair, and now all accounts represent his irresolution as increasing. He intervenes less and less in busi- ness, transfers his power more and more to M. Rouher, allows his will to be turned by his Cabinet much more frequently

• than of old. He may in the end prefer to meet the series of . minor difficulties to which retreat would expose hid, rather than risk for a final triumph, which would seat his dynasty for a century, its final overthrow, and this is, we honestly believe, the strongest obstacle remaining in the way of war.