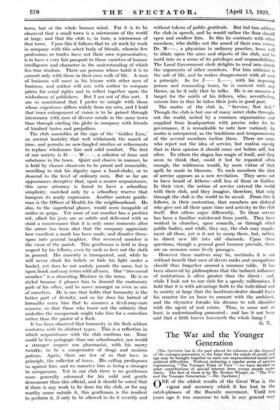 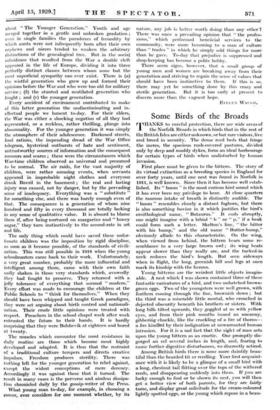 The War and the Younger Generation

[The Spectator has in the past placed its columns at the disposal of the younger generation in the hope that the minds of youth and age may be brought together to meet our unprecedented social and political difficulties. Without initiating a regular series of articles representing " The Younger Point of View ' we have decided to print contributions of special interest from young people under thirty. The first of these is by Mr. Evelyn-Waugh, on The War and the Younger Generation.' —ED. Spectator.] ONE of the oddest results of the Great War is the vigour and accuracy which it has lent to the catch-phrases of the Ibsenite movement. 'Until ten years ago it was nonsense to talk in any general- way about " The Younger - Generation." Youth and age merged together in a gentle and unbroken gradation ; even in single families the paradoxes of fecundity by which aunts were not infrequently born after their own nephews and nieces tended to weaken the arbitrary distinctions of the genealogical tree. But in the social subsidence that resulted from the War a double cleft appeared in the life of Europe, dividing it into three perfectly distinct classes between whom none but the most superficial sympathy can ever exist. There is (a) the wistful generation who grew up and formed their opinions before the War and who were too old for military service ; (b) the stunted and mutilated generation who fought ; and (c) the younger generation.

Every accident of environment contributed to make of this latter generation the undiscriminating and in- effectual people we lament to-day. For their elders, the War was either a shocking negation of all they had represented, or a reckless, rather thrilling, plunge into abnormality. For the younger generation it was simply the atmosphere of their adolescence. Darkened streets, food rations, the impending dread of the War Office telegram, hysterical • outbursts of hate and sentiment, untrustworthy sources of information and the consequent rumours and scares ; these were the circumstances which War-time children observed as universal and presumed to be normal. The air raids, for the vast majority of children, were rather amusing events, when servants appeared in improbable night clothes and everyone drank Bovril in the basement ; the real and lasting injury was caused, not by danger, but by the pervading sense of inadequacy. Everything was a " substitute " for something else, and there was barely enough even of that. The consequence is a generation of whom nine hundred and fifty in every thousand are totally lacking in any sense of qualitative value. It is absurd to blame them if, after being nurtured on margarine and " honey sugar," they turn instinctively to the second-rate in art and life.

The only thing which could have saved these unfor- tunate children was the imposition by rigid discipline, as soon as it became possible, of the standards of civili- zation. This was still possible in 1918 when the young schoolmasters came back to their work. Unfortunately, a very great number, probably the more influential and intelligent among them, came with their own faith sadly shaken in those very standards which, avowedly they had fought to preserve. They returned with a jolly tolerance of everything that seemed " modern." Every effort was made to encourage the children at the Public Schools to " think for themselves." When they should have been whipped and taught Greek paradigms, they were set arguing about birth control and nationali- zation. Their crude little opinions were treated with respect. Preachers in the school chapel week after week entrusted the future to their hands. It is hardly surprising that they were Bolshevik at eighteen and bored at twenty.

The muscles which encounter the most resistance in daily routine are those which become most highly developed and adapted. It is thus that the restraint of a traditional culture tempers and directs creative impulses. Freedom produces sterility. There was nothing left for the younger generation to rebel against, except the widest conceptions of mere decency. Accordingly it was against these that it turned. The result in many cases is the perverse and aimless dissipa- tion chronicled daily by the gossip-writer of the Press.

What young man to-day, for example, in choosing a career, ever considers for one moment whether, by its nature, any job is better worth -doing than any other ? There was once a prevailing opinion that " the profes- sions," which performed beneficial services to the community, were more becoming to a man of culture than " trades " in which he simply sold things for more than he gave. To-day that prejudice is suppressed and shop-keeping has become a polite hobby.

There seem signs, however, that a small group of young men and women are breaking away from their generation and striving to regain the sense of values that should have been instinctive to them. If this is so, there may yet be something done by this crazy and sterile generation. But it is too early at present to discern more than the vaguest hope.