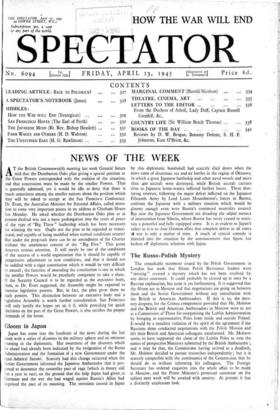 Japan has come into the forefront of the news during the last week with a series of disasters in the military sphere and an ominous 'yarning in the diplomatic. Her awareness of the disasters which lie ahead had already been indicated by the resignation of the Koiso Administration and the formation of a new Government under the ged Admiral Suzuki. Scarcely had this change occurred when the Soviet Government informed the Japanese Ambassador that it pro- posed to denounce the neutrality pact of 1941 (which in theory still as a year to run), on the ground that the help Japan had given to Germany and the war she had waged against Russia's Allies had deprived the pact of its meaning. The sensation caused in Japan by this diplomatic bombshell had scarcely died down when the news came of disastrous sea and air battles in the region of Okinawa, in which a great Japanese battleship and other naval vessels and more than 40o aircraft were destroyed, while British aircraft carriers close to Japanese home-waters inflicted further losses. These shat- tering reverses, following the major defeat inflicted on the Japanese Fifteenth Army by Lord Louis Mountbatten's forces in Burma, confront the Japanese with a military situation which would be gloomy enough even were Russia's continued neutrality assured. But now the Japanese Government are dreading the added menace of intervention from Siberia, where Russia has never ceased to main- tain a powerful and fully equipped army. It is as evident to Japan's rulers as it is to their German allies that complete defeat in all zones di war is only a matter of time. A touch of cynical comedy is injected into the situation by the announcement that Spain has broken off diplomatic relations with Japan.