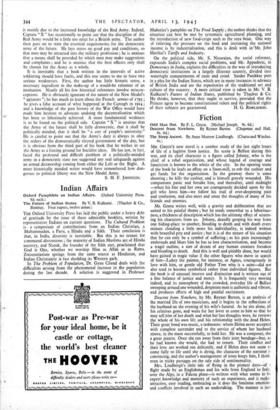 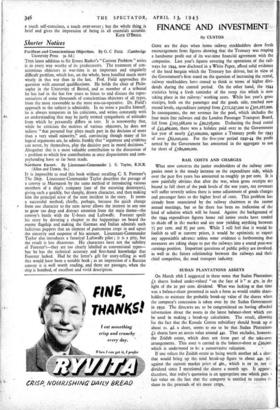 MR. GREEN'S new novel is a sombre study of the last eight hours of life of a fugitive from justice. Its scene is Belfast during this war, and its chief character is a figure called Johnny, who is the chief of a rebel organisation, and whose legend of courage and fanaticism is known to the whole of the city. In the opening scene of the book he leads an affray on a linen-mill, to rob the cashier and get funds for the organisation. In the getaway there 'is some shooting ; he kills the cashier, and is himself gravely wounded. His companions panic and forsake him, and thereafter, until midnight —when his fate and her own are courageously decided upon by the girl who . loves him—we follow his trail of ever-deepening pain and confusion, and also meet and enter the thoughts of many of his friends and enemies.

Mr. Green writes well, with a gravity and deliberation that are suited to his painful theme ; but he tends somewhat to a laborious- ness, a thickness of description which has the ultimate effect of screen- ing his characters from us. Johnny, dazedly groping his way from one hiding-place to another, bleeding to death and with death every minute clouding a little more his individuality, is indeed written with beautiful pity and justice ; but it is of the nature of his situation that he can only be a symbol of suffering ; as his pain increasingly enshrouds and blurs him he has to lose characterisation, and become a tragic' outline, a sort of dream of any human creature forsaken and bleeding to death. And this is well and pitiably done, but would have gained in tragic value if the other figures who move in search of him—Lukey the painter, for instance, or Agnes, courageously in love with him, or gentle old Father Tom who is a saint—did not also tend to become symbolical rather than individual figures. But the book is of unusual interest and distinction and is written out of a fine balance of justice and mercy. It is frequently very moving indeed, and its atmosphere of the crowded, everyday life of Belfast sweeping around one wounded, desperate man is authentic and vibrant, and produces effects of high and painful excitement.

Descent from Nowhere, by Mr. Reyner Barton, is an analysis of the married life of two musicians, and it begins in the reflections of the husband on the evening of his wife's funeral. As he sits alone, all his relatives gone, and waits for her lover to come to him so that he may tell him of her death and what her last thoughts were, he reviews the whole of his own life and his relationship with the dead Helen. Their great bond was music, a taskmaster whom Helen never accepted with complete surrender and to the service of whom her husband strove, in the main successfully, to hold her. He was a composer, she a great pianist. Once she ran away from their joint bondage—but, as he had known she would, she had to return. Their conflict and their love are worked out delicately, and if Helen does not seem to come fully to life until she is dying, the character of the narratck is convincing, and the author's management of irony keeps him, I think. even in tricky passages on the safe, side of sentimentality.

Mrs. Lindbergh's •little tale of flying in the pioneer days—of. a flight made by an Englishman and his wife from England to Italy. over the Alps, in a 'Falcon plane—is written with what seems to be expert, knowledge and memory of such an experience, and it make!: attractive, easy reading, embracing as it does the feminine emotions and conflicts involved in such an undertaking. The manner is just a touch self-conscious, a touch over-sweet ; but the whole thing is brief and gives the impression of being in all essentials accurate.