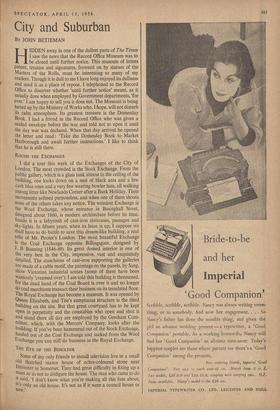 BY JOHN BETJEMAN HIDDEN away in one of the dullest parts of The Times I saw the news that the Record Office Museum was to be closed until further notice. This museum of letters patent, treaties and signatures, frowned on by statues of the Masters of the Rolls, must be interesting to many of my readers. Though it is dull to me I have long enjoyed its dullness and used it as a place of repose. I telephoned to the Record Office to discover whether 'until further notice' meant, as it usually does when employed by Government departments, 'for ever.' I am happy to tell you it does not. The Museum is being tarted up by the Ministry of Works who, I hope, will not disturb its calm atmosphere. Its greatest treasure is the Domesday Book. I had a friend in the Record Office who was given a sealed envelope before the war and told not to open it until the day war was declared. When that day arrived he opened the letter and read • 'Take the Domesday Book to Market Harborough and await further instructions.' I like to think that he is still there.

I did a tour this week of the Exchanges of the City of London. The most crowded is the Stock Exchange. From the public gallery, which is a glass tank almost in the ceiling of the building, one looks down on a nest of black ants and a few dark blue ones and a very few wearing bowler hats, all walking among litter like Newlands Corner after a Bank Holiday. Their movements seemed purposeless, and when one of them shouts none of the others takes any notice. The weirdest Exchange is the Wool Exchange, whose entrance in Basinghall Street, designed about 1860, is modern architecture before its time. Inside it is a labyrinth of cast-iron staircases, passages and sky-lights. In fifteen years, when its lease is up, I suppose we shall have to do battle to save this dream-like building, a real relic of Mr. Pooter's London. The most beautiful Exchange is the Coal Exchange opposite Billingsgate, designed by J. B Bunning (1846-49). Its great domed interior is one of the very best in the City, impressive, vast and exquisitely detailed. The stanchions of cast-iron supporting the galleries are made of a cable motif, the paintings on the panels, by Sang. show Victorian industrial scenes (some of them have been wantonly 'creamed over'), I am told this building is threatened, for the dead hand of the Coal Board is over it and no longer do coal merchants transact their business on its tesselated floor. The Royal Exchange has become a museum. It was opened by Queen Elizabeth, and Tite's sumptuous structure is the third building on the site. But that great courtyard has to be kept open in perpetuity and the constables who open and shut it and stand there all day are employed by the Gresham Com- mittee, which, with the Mercers' Company, looks after the building. If you've been hammered out of the Stock Exchange, hauled out of the Coal Exchange and sacked from the Wool Exchange you can still' do business in the Royal Exchange.

THE EYE OF THE BEHOLDER

Some of my only friends to install television live in a small old thatched manor house of ochre-coloured stone near Ilminster in Somerset. They had great difficulty in fixing up a mast so as not to disfigure the house. The man who came to 00 it said, '1 don't know what you're making all this fuss about, it's only an old house. It's not as if it were a council house or new.'