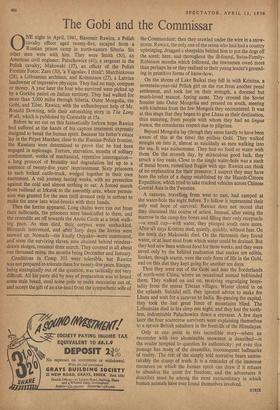 The Gobi and the Commissar

0 NE night in April, 1941, Slavomir Rawicz, a Polish cavalry officer aged twenty-five, escaped from a Russian prison camp in north-eastern Siberia. Six other men were with him. They were Smith (50), an American civil engineer; Paluchowicz (41), a sergeant in the Polish cavalry; Makowski (37), an officer of the Polish Frontier Force; Zaro (30), 'a Yugoslav, I think'; Marchinkovas (28), a Lithuanian architect; and Kolemcnos (27), a Latvian landowner of impressive physique. They had no map, compass or money. A year later the four who survived were picked up by a Gurkha patrol on Indian territory. They had walked for more than 3,000 miles through Siberia, Outer Mongolia, the Gobi, and Tibet. Rawicz, with the unfiamboyant help of Mr. Ronald Downing, tells their astonishing story in The Long Walk, which is published by Constable at 15s.

Before he set out on this fantastically forlorn hope Rawicz had suffered at the hands of his captors treatment expressly designed to break the human spirit. Because his father's estate lay in the Pripet Marshes, close to the Russian-Polish frontier, the Russians were determined to prove that he had been engaged in espionage. Torture, starvation, months of solitary confinement, weeks of mechanical, repetitive interrogation— a long protocol of brutality and degradation led up to a sentence of twenty-five years' imprisonment. Sixty prisoners to each locked cattle-truck, wedged together in their own excrement. A rail journey lasting weeks, with no protection against the cold and almost nothing to eat. A forced march from railhead at Irkutsk to the assembly area, where permis- sion was granted for the men (still dressed only in cotton) to make the snow into wind-breaks with their hands.

Then the lorries appeared. Long chains were run out from their tailboards, the prisoners were handcuffed to them, and the crocodile set off towards the Arctic Circle at a brisk walk- ing pace. As men died, their corpses were unshackled. Blizzards intervened, and after forty days the lorries were snowed up. Nomads—the kindly Ostyaks—were summoned, and soon the surviving slaves, now chained behind reindeer- drawn sledges, resumed their march. They covered in all about one thousand miles, the months being December and January.

Conditions in Camp 303 were tolerable, but Rawicz was not prepared to tolerate them for twenty-five years. Escape, being strategically out of the question, was tactically not very difficult. All his party did by way of preparation was to hoard some stale bread, steal some pelts to make moccasins out of, and accept the gift of an axe-head from the sympathetic wife of the Commandant; then they crawled under the wire in a snow- storm. Rawicz, the only one of the seven who had had a country upbringing, dragged a sheepskin behind him to put the dogs off the scent; here, and throughout the ill-found, Swiss-Family- Robinson months which followed, the townsmen owed more than perhaps he or they realised to their young leader's ground- ing in primitive forms of know-how.

On the shores of Lake Baikal they fell in with Kristina, a seventeen-year-old Polish girl on the run from another penal settlement, and took her on their strength, a doomed but much-loved mascot. Spring came. They crossed the Soviet frontier into Outer Mongolia and pressed on south, meeting with kindness from the few Mongols they encountered. It was at this stage that they began to give Lhasa as their destination, thus ensuring, from people with whom they had no lingua franca, the considerate respect due to pilgrims.

Beyond Mongolia lay (though they seem hardly to have been aware of this at the time) the pitiless Gobi. They walked straight on into it, almost as suicidally as men walking into the sea. It was midsummer. They had no food or water with them. On the seventh day, by miraculous good luck, they struck a tiny oasis. Close to the single water-hole was a stack of metal boxes, rusted and fragile with age. Rawicz can think of no explanation for their presence; I suspect they may have been the relics of a dump established by the Haardt-Citroen Expedition, which tried to take tracked vehicles across Chinese Central Asia in the Twenties.

A caravan, travelling from west to east, had camped at the water-hole the night before. To follow it represented their only real hope of survival; Rawicz does not record that they discussed this course of action. Instead, after eating the marrow in the camp-fire bones and filling their only receptacle —a small cup—with water, they plunged south once more. After sik days Kristina died, quietly, quickly, without fuss. On the tenth day Makowski died. On the thirteenth they found water, or at least mud from which water could be drained. But they had now been without food for three weeks, and they were saved only by the belated realisation that snakes are edible. Snakes, though scarce, were the only form of life in the Gobi, and on this diet they kept going for another ten days.

Then they were out of the Gobi and into the borderlands of north-west China, where an occasional nomad befriended them. They walked on and on, receiving ungrudging hospi- tality from the sparse Tibetan villages. Winter closed in on the uplands. Suicidal still, they ignored advice to make for Lhasa and wait for a caravan to India. By-passing the capital, they took the last great fence of mountains blind. The Lithuanian died in his sleep one night, and they lost the tooth- less. indomitable Paluchowicz down a crevasse. A few days later the four scarecrow survivors were explaining themselves to a spruce British subaltern in the foothills of the Himalayas.

Only at one point in this incredible story—where an encounter with two abominable snowmen is described—is the reader tempted to question its authenticity; yet even this passage has many of the dreamlike, inconsequent hallmarks of reality. The rest of the simply told narrative bears unmis- takably the stamp of truth, It is a reminder of the immense resources on which the human spirit can draw if it refuses to abandon the quest for freedom; and the adventures it describes must be among the most extraordinary in which human animals have ever found themselves involved.