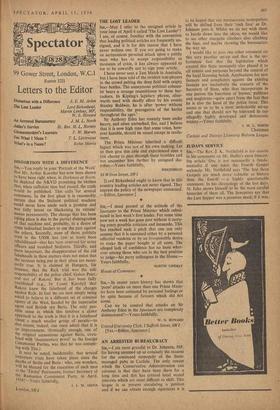 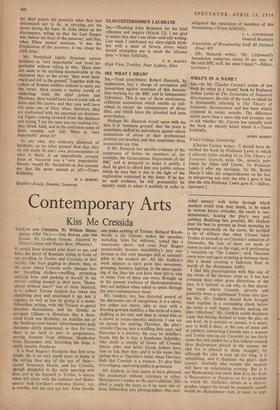 SIR,—The Rev. J. K. Nettlefold is too caustic in his comments on Mr. Hollis's most interest- ing article. One is not necessarily a funda- mentalist if one takes the Fourth Gospel seriously. Mr. Nettlefold says 'The first three Gospels are much more valuable as history than the fourth' — a highly questionable statement. In his chronolou of the last days, St. John shows himself to be the most careful historian of them all. The Synoptists say that the Last Supper was a passover meal; if it was.

the chief priests did precisely what they had determined not to do, in carrying out the arrest during the feast. St. John clears up the discrepancy, telling us that the Last Supper was 'before the feast of the Passover,' and that, when Pilate passed sentence, 'it was the Preparation of the passover; it was about the sixth hour.'

Mr. Nettlefold lightly dismisses certain incidents as 'very improbable' and 'most im- probable' without telling us why. There does not seem to be anything inconceivable in the statement that, at the arrest, 'they went back- ward and fell to the ground.' Together with the cohort of Roman soldiers ordered to carry out the arrest, there comes a motley crowd of underlings from the chief priests and Pharisees; these would have heard much talk of Jesus and His claims, and they may well have felt some awe of Him; when, therefore, they are confronted with the unarmed yet dominat- ing Figure coming forward from the darkness and saying 'I am the man you are looking for,' they shrink back, and in the confusion some of them stumble and fall. What is 'very improbable' about it?

In any case, this arbitrary dismissal of incidents, on no other ground than that they do not easily fit one's own preconceptions of what is likely, is an unprofitable process. Jesus of Nazareth was a 'very improbable' Person : would Mr. Nettlefold on that account say that He never existed at all?—Yours faithfully, H. L. HORNBY Grabbist House. Dunster, Somerset