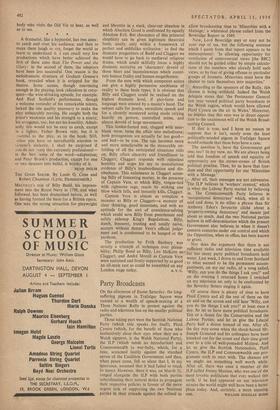 ON the afternoon of Easter Saturday, the long- suffering pigeons in Trafalgar Square were treated to a wealth of speech-making at a Three Nations Rally in protest against the radio and television ban on the smaller political parties.

Those taking part were the Scottish National Party (which title speaks for itself), Plaid Cymru (which, for the benefit of those who instinctively close their eyes when they see a Welsh signpost, is the Welsh National Party), the ILP (which needs no introduction) and Commonwealth (a war-baby, which, for a time, screamed lustily against the starched apron of the Coalition Government and then, when peace came, fell so silent that I, in my ignorance, assumed that it had failed to reach its teens). However, there it was, on March 31, ranged alongside the 1LP with both parties subordinating their• natural desire to propagate their respective policies in favour of the more urgent task of supporting the two National parties in their crusade against the refusal to

allow broadcasting time to 'Minorities with a Message,' a whimsical phrase culled from the Beveridge Report in 1949.

Now, Lord Beveridge may or may not be your cup of tea, but the following sentence which I quote from that report appears to be unexceptional : 'In allotting opportunity for ventilation of controversial views [the BBC] should not be guided either by simple calcula- tions of the numbers who already hold such views, or by fear of giving offence to particular groups of listeners. Minorities must have the chance to turn themselves into majorities.'

According to the sponsors of the Rally, this chance is being, withheld. Indeed the Welsh delegate states that 'the Postmaster General last year vetoed political party broadcasts in the Welsh region, which would have allowed Plaid Cymru on the air in Wales.' Moreover, he implies that this veto was in direct opposi- tion to the unanimous will of the Welsh Broad- casting Council.

If that is true, and I have no reason to suppose that it isn't, surely even the least politically-minded pigeon in Trafalgar Square would concede that these boys have a case.

The question is, have the Government got one, too? In my view, no. We are always being told that freedom of speech and equality of opportunity are the corner-stones of British political practice. Then, let us have that free- dom and that opportunity for our 'Minorities with a Message.'

- After all, their messages are not subversive. The ILP believes in 'workers' control,' which is what the Labour Party started by believing in. The Commonwealth Party believes in 'occupational democracy' which, when all is said and done, is no sillier a phrase than Sir Anthony Eden's favourite cliché about a 'property-owning democracy' and means just about as much. And the two National parties believe in self-determination which the present Government also believes in when it doesn't concern countries under our control and which the Opposition, when in office, has been known to grant.

Nor does the argument that there is not sufficient radio and television time available for too many party political broadcasts hold. water. Last week, I drove to and from Scotland to what seemed to be the permanent accom- paniment, on my car radio, of a song called, 'Willy, can you do the things I ask you?' and on the evening I returned home I switched on my television set only to be confronted by the Beverley Sisters singing it again.

Of course there is plenty of time to have Plaid Cymru and all the rest of them on the air and on'the screen and still hear 'Willy, can you do the things I ask you?' at least once a day. So let us have more political broadcasts. Ten or a dozen for the Conservative and the Labour Parties; and let us give the Liberal Party half a dozen instead of one. After all, the 'day may come when the shock-haired Mr. Joseph Grimond and his colleagues have been knocked out for the count and their time given over to a trio of well-pomaded Maltese. And . let us give the Scottish Nationalists, Plaid Cymru, the ILP and Commonwealth one pro- gramme each to start with. The chances are we might see something well worth while. After all, there was once a member of the 1LP called Jimmy Maxton, who was one of the most lovable politicians that ever walked this earth. If he had appeared on our television screens the world might well have been a better place today. And, certainly, a more amusing