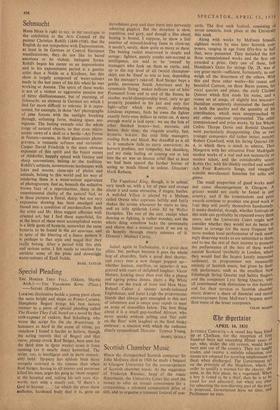 THE HARDER THEY FALL. (Odeon, Marble Arch.)—THE VAGABOND KING. (Plaza.) -SAFARI. (Empire.) LOOKING diminutive beside a young giant about the same height and shape as Primo Camera, Humphrey Bogart brings his best laconic manner to a piece of special pleading called The Harder They Fall, based on a novel by that arch-exposer of rackets, Bud Schulberg, who wrote the script for On the Waierf rout. It hammers as hard in the cause of virtue, yet somehow I found it harder to believe, though the acting (mostly that of Bogart and that suave, plump crook Rod Steiger, here seen for the third time in tbree weeks) saves it from seeming (as it nearly does) hysterical. The script, too, is intelligent and in parts remark- ably bold : lip-piety has seldom been more savagely satirised. in the cinema than when Rod Steiger, having to all intents and purposes killed his man, urges his gang to 'show respect' at the hospital and, rolling his soft eyes sky- wards, says with a manly sob, 'If there's a God in heaven . . (at which the press show audience, hardened body that it is, gave an incredulous gasp and then burst into nervously admiring giggles). But the direction is slow, repetitive, and gory, and though a film about boxing is bound, I suppose, to show a fair number of minced-looking faces in close-up, it needn't, surely, show quite as many as these. The boxing racket uncovered is simple and savage: fighters, mostly youths sub-normal in intelligence, are said to be 'owned' by managers who look on them as cattle, and. up to the .top level of all (world champion- ship), can be 'fixed' to win or lose, depending on the manager's rake-off. Rod Steiger buys a gentle, enormous South American and. by systematic 'fixing,' makes millions out of him. Promoted from end to end of the States, he reaches world-championship level, only to get properly pounded in his last and only fair fight—after which his owner, deducting fabulous expenses, finds he owes the fighter exactly forty-nine dollars to retire on. A nasty enough world is laid open: we sec the fate of other finished boxers—lost, moronic, old before their time; the ringside cruelty, lust, hysteria, hokum; the cold little managers, trading flesh and blood. But dreadful as it all is, it somehow fails to carry conviction; its horrors produce, not sympathy, but shudders; and my main feeling on coming out at last into the air was an intense relief that at least we had been spared the further horror of seeing so much blood in colour. Director:. Mark Robson.

The Vagabond King, though, is in colour, very much so, with a lot of puce and orange about it and some attractive, if stagey, battles. A well-fed Villon is played by a Maltese called Oreste who aspirates heftily and fairly shakes the screen whenever he starts to sing. and an icily spiderish Louis XI by Walter Hampden. The rest of the cast, except when dancing or fighting, is rather wooden, and the whole thing somehow lacks the spontaneity and charm that a musical needs if we are to sit happily through ninety minutes of it. Director : Michael Curtiz.

Safari, again in Technicolor, is a great deal sillier, but, perhaps because it goes the whole hog of absurdity, feels a good deal shorter; and every time a new danger popped up— whether human, reptilian. or aquatic—it was greeted with roars of delighted laughter. Victor Mature, looking more than ever like a plump and ageing prima donna, plays a Big White Hunter on the track of lions and Mau Mau; Roland Culver a sinister sandy-coloured Englishman; and Janet Leigh the preposterous blonde that always gets entangled in this sort of adventure and is swept over rapids to meet an army of crocodiles below. The. best thing about it is a small gap-toothed African. who never speaks without yelling and 'fair rolls on the floor' with laughter at the final bosky embrace: a reaction with which the audience clearly sympathised. Director : Terence Young.