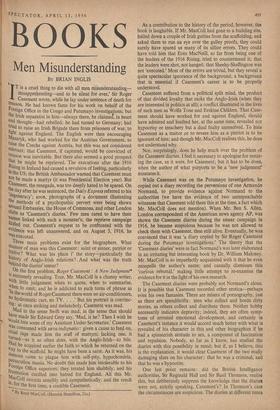 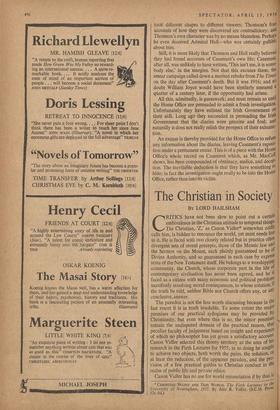 BOOKS Men Misunderstanding BY BRIAN INGLIS I T is a cruel

thing to die with all men misunderstanding- misapprehending—and to be silent for ever,' Sir Roger Casement wrote, while he lay under sentence of death for treason. He had known fame for his work on behalf of the Foreign Office in the Congo and Putumayo investigations; but the Irish separatist in him—always there, he clairnecr, in heart and thought—had rebelled; he had turned to Germany; had tried to raise an Irish Brigade there from prisoners of war, to fight against England. The English were then encouraging Masaryk, who had worked for the Austrian Government, to raise the Czechs against Austria, but this was not considered relevant; that Casement, if captured, would be convicted of treason was inevitable. But there also seemed a good prospect that he might be reprieved. The executions after the 1916 Rising in Ireland had caused a revulsion of feeling, particularly In the US; the British Ambassador warned that Casement, must not be made a martyr (it was Presidential Election year). But Casement, the renegade, was too deeply hated to be spared. On the day after he was sentenced, the Daily Express referred to his `degeneracy'; soon, photographs of a document illustrating the methods of a psychopathic pervert were being shown around Embassies, the House of Commons, and other London clubs as 'Casement's diaries.' Few men cared to have their names linked with such a monster's; the reprieve campaign fizzled out. Casement's request to be confronted with the evidence was left unanswered, and on August 3, 1916, he Was executed. Three main problems exist for the biographers. What manner of man was this Casement : saint or sinner, patriot or traitor? What was his place i' the story—particularly the history of Anglo-Irish relations? • And what was the truth behind the diaries' smear?

On the first problem, Roger Casement : A New Judgment* 's extremely revealing. True, Mr. MacColl is a clumsy writer, with little judgement when to quote, when to summarise, When to omit; and he is addicted to such turns of phrase as 'In the world of Roger Casement there were no air-conditioners, no hydromatic cars, no TV. . . .' But his portrait is convinc- ing : at once striking and melancholy. Casement was mad. Mad in the sense Swift was mad; in the sense that should have made Sir Edward Grey say, 'Mad, is he? Then I wish he would bite some of my Assistant Under-Secretaries.' Casement Was consumed with sceva indignatio: given a cause to feed on, cruel rage made him the stuff of martyrs; lacking one, it turned—as it so often does, with the Anglo-Irish—to bile. Had he acquired earlier the faith to which he returned on the waY to the scaffold, he might have been a saint. As it was, his demo ns came to plague him with self-pity, hypochondria, Persecution mania. No doubt this made him intolerable to his Foreign Office superiors; they treated him shabbily; and his frustration curdled into hatred for England. All this Mr. M. ,'Iccoll records sensibly and sympathetically; and the result Is. for the first time, a'credible Casement.

* By Rend MacColl. (Hamish Hamilton, 21s.) As a contribution to the history of the period, however, the book is laughable. If Mr. MacColl had gone to a building site, hailed down a couple of Irish gutties from the scaffolding, and asked them to run an eye over the galley proofs, they could surely have spared us many of its sillier errors. They could have told him that Eoin MacNeill, so far from being one of the leaders of the 1916 Rising, tried to countermand it; that the leaders were shot, not hanged; that Sheehy-Skeffington was not 'executed.' Most of the errors are trivial, but they reveal a quite spectacular ignorance of the background; a background that is essential if Casement's career is to be properly understood.

Casement suffered from a political split mind, the product of that divided loyalty that racks the Anglo-Irish (when they are interested in politics at all); a conflict illustrated in the lives of such men as Wolfe Tone and Erskine Childers. That Case- ment should have worked for and against England, should have admired and loathed her, at the same time, revealed not hypocrisy or treachery but a dual fealty unresolved. To bate Casement as a traitor or to revere him as a patriot is to be ignorant of him; and though Mr. MacColl realises this, he does not understand why.

Nor, surprisingly, does he help much over the problem of the Casement diaries. I feel it necessary to apologise for restat- ing the case, as it were, for Casement; but it has to be done, when the author of what purports to be a 'new judgement' misstates it.

While Casement was on the Putumayo investigation, he copied out a diary recording the perversions of one Armando Normand, to provide evidence against Normand to the authorities (we have the evidence of two unimpeachable witnesses that Casement told them this at the time, a fact which Mr. MacColl does not mention). When Mr. Ben S. Allen, London correspondent of the American news agency AP, was shown the Casement diaries during the smear campaign in 1916, he became suspicious because he was not allowed to check them with Casement, then still alive. Eventually, he was convinced that it was 'a diary copied by Sir Roger Casement during the Putumayp investigations.' The theory that the 'Casement diaries' were in fact Normand's was later elaborated in an irritating but interesting book by Dr. William Maloney. Mr. MacColl is so imperfectly acquainted with it that he even misspells the author's name; and casually dismisses this 'curious rebuttal,' making litt'le attempt to re-examine the evidence for it in the light of his own research.

The Casement diaries were probably not Normand's alone. It is possible that Casement recorded other erotica—perhaps even his own fantasies. There are misers of pornography, just as there are spendthrifts : men who collect and horde dirty stories, as others collect and distribute them. Neither hobby necessarily indicates depravity; indeed, they are often symp- toms of arrested emotional development, and certainly in Casement's instance it would accord much better with what is revealed of his character in this and other biographies if he had a spinsterish attitude to sex, a compound of fascination and repulsion. Nobody, so far as I know, has studied the diaries with this possibility in mind; but if, as I believe, this is the explanation, it would clear Casement of the two really damaging slurs on his character : that he was a criminal, and that he was a hypocrite.

One last point remains : did the British Intelligence authorities, Sir Reginald Hall and Sir Basil Thomson, realise this, but deliberately suppress the knowledge that the diaries were not, strictly speaking, Casement's? In Thomson's case the circumstances are suspicious. The diaries at different times took different shapes to different viewers; Thomson's four accounts of how they were discovered are contradictory; and Thomson's own character was by no means blameless. Perhaps he even deceived Admiral Hall—who was certainly gullible about him.

Still, it is more likely that Thomson and Hall really believed they had found accounts of Casement's own life; Casement, after all, was unlikely to have written, 'This isn't me, it is some- body else,' in the margins. Not that this excuses them; the smear campaign called down a merited rebuke from The Times on the day after Casement's death. But it was 1916; and no doubt William Joyce would have been similarly smeared ti quarter of a century later, if the opportunity had arisen. All this, admittedly, is guesswork; and must remain so until the Home Office are persuaded to admit a fresh investigation. Unfortunately they have enlisted the Irish Government on their side. Long ago they succeeded in persuading the Irish Government that the • diaries were genuine and foul; and naturally it does not really relish the prospect of their exhuma' tion.

An excuse is thereby provided for the Home Office to refuse any information about the diaries, leaving Casement's repo- lion under a permanent smear. This is of a piece with the Home Office's whole record on Casement which, as Mr. MacColl shows, has been compounded of obstinacy, malice, and decer lion. The inevitable deduction is that they have something 10 hide; in fact the investigation ought really to be into the Howe Office, rather than into its victim.