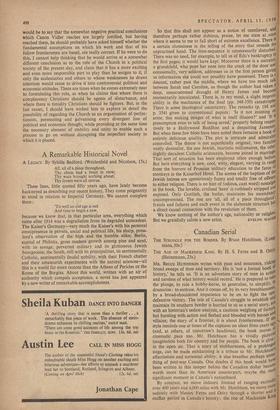 A LEGACY. By Sybille Bedford. (Weidenfeld and Nicolson, 15s.) All, all of a piece throughout.

Thy chase had a beast in view; Thy wars brought nothing about; Thy lovers were all untrue.

These lines, little quoted fifty years ago, have lately become hackneyed as describing our recent history. They come poignantly to mind in relation to Imperial Germany. We cannot complete them:

'Tis-well an old age is out And time to begin a new,

because we know that, in that particular area, everything which came after 1914 was a degradation from its degraded antecedent. The Kaiser's Germany—very much the Kaiser's with his personal omnipresence in private, social and political life, his sharp, press- lord's observation of the high and the humble alike; Berlin,

capital of Philistia, gross modern growth among pine and sand, with its savage, perverted military and its gluttonous Jewish bourgeoisie; the South, still with its principalities, its sentimentally Catholic, sentimentally feudal nobility, with their French chatter and their amateurish experiments with the natural sciences—all this is a world far more remote than the Athens of Pericles or the Rome of the Borgias. About this world, written with an air of authority which compels acceptance, a novel has just appeared by a new writer of remarkable accomplishment. So that this shall not appear as a notice of unrelieved, and therefore perhaps rather dubious, praise, let me state at once where it seems to me to fall short of extreme excellence. There is a certain clumsiness in the telling of the story that reveals the unpractised hand. The time-sequence is unnecessarily disturbed. There was.no need, for example, to tell us of Edu's bankruptcy in the first pages; it would have kept. Moreover there is a narrator, a grandchild, who pops her nose into the crack of the door and occasionally, very seldom, addresses us in the first person giving us information she could not possibly have possessed. There is descent, rather past the middle, where we have too much talk between Sarah and Caroline, as though the author had taken a deep, unaccustomed draught of Henry James and become momentarily intoxicated. There is, to my mind, a slight improb• ability in the mechanics of the final (pp. 348-350) catastrophe. There is some theological uncertainty. The remarks (p. 188 and p. 354) given to conventional papists : 'Is it not insisting on error, this making images of what is itself illusion?' and 'It is presumption even to talk of being saved,' properly belong respee' tively to a Hollywood Buddhist and a despairing Jansenist, But when these few blots have been noted there remains a book of entirely delicious quality. The plot is intricate and admirablY controlled. The theme is not superficially original; two families vastly dissimilar, the one Jewish, inartistic millionaires, the other slightly decadent Catholic aristocrats, become joined in marriage. That sort of situation has been employed often enough before. But here everything is new, cool, witty, elegant, varying in range from the horrors of Prussian military education to the farce of monkeys in the Kaiserhof Hotel. The scenes of the baptism of the Jewish heiress are uproariously funny and totally free of offence

to either religion. There is no hint of (odious, cant word) nostalgia in the book. The lovable, civilised 'hero' is ruthlessly stripped and

exposed. Only Gottlieb, the butler, maintains his ascendancy uncompromised. The rest are 'all, all of a piece throughout.; frauds and failures and each event in the elaborate structure bas a direct causal connection with the revelation of them. We know nothing of the author's age, nationality or relig

But we gratefully salute a new artist. EVELYN WALVB