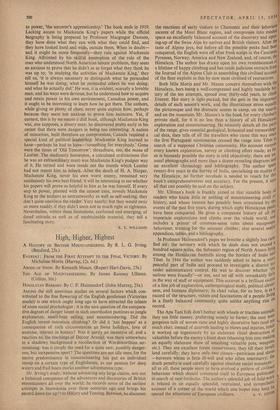 HIMALAYAN BARBARY. By C. F. Haimendorf. (John Murray, 21s.) AMONG the still unwritten studies on several factors which con- tributed to the fine flowering of the English gentleman (Victorian model) is one which ought long ago to have attracted the talents of some social psychologist : it is the nice question of the compara- tive degrees of danger latent in such unorthodox pastimes as jungle exploration, small-boat sailing, and mountaineering. Did the English invent mountain climbing? Or did it 'just happen' as a consequence of such circumstances as Swiss holidays, love of exercise, interest in botany? Was it partly an incentive of, and a reaction to, the teachings of Doctor Arnold; was there somewhere in a shadowy background a recollection of Wordsworthian ser- monising; was it simply the need for a quite new, possibly danger- ous, but inexpensive sport? The questions are not idle ones, for the native predominance in mountaineering has put an individual: stamp on a certain type of Englishman, as our passion for deep waters and frail boats marks another adventurous type.

Mr. Irving's study, without advancing any large claims, sets out a balanced conspectus of the adventures and discoveries of British mountaineers all over the world; he records some of the earliest attempts in Snowdonia over three centuries ago and brings his record down for up?) to Hillary and Tensing. Between, he discusses the reactions of early visitors to Chamonix and their laborious ascents of the Mont Blanc region, and compresses into modest space an excellently balanced account of the discovery and open' ing-up of the Swiss Alps by natives and British visitors. After the taste of Alpine joys, but before all the possible peaks had heel

conquered, the English were off after fresh scalps in the Caucasus,

Pyrenees, Norway, America and New Zealand, and, of 'course, the Himalaya. The author has drawn upon his own reminiscences et a lifetime of happy climbing and has made judicious extracts from the Journal of the Alpine Club in assembling this civilised account of the finer exploits in this by now most civilised of recreations.

Both Mlle Morin and Mr. Mason concern themselves with the Himalaya, hers being a well-compressed and highly readable bie' tory of the ten attempts, spread over thirty-odd years, to climb Everest. Her story is tight-packed, but she gets in the important details of each season's work, and the illustrations stress equallY the picturesque and the dramatic scenes in camp, on the march, and on the mountain. Mr. Mason's is the book for every climber's private shelf, for it is no less than a history of all Himalayan exploration and mountaineering. He minutely details all the parts of the range, gives essential geological, botanical and meteorology' cal data, then tells of all the travellers who came this way since the first Portuguese missionaries crossed the range into Tibet in search of a supposed Christian community. His account records every known exploration, survey or climbing effort made; as far as is humanly possible the story is told objectively; there are nil; usual photographs and more than a dozen revealing diagrams and an excellent chronology and bibliography. The author spent twenty-five years in the Survey of India, specialising on studies °,` the Himalaya; no further accolade is needed to vouch for this book's comprehensiveness and accuracy. For the present, it Os all that can possibly be said on the, subject. Mr. Ullman's book is frankly aimed at that sizeable body °f readers who know little or nothing of mountaineering craft Or history, and whose interest has possibly been stimulated by the events of the past five years, during which eight Himalayan peal's • have been conquered. He gives a competent history of all the important explorations and climbs over the whole world, and includes a primer of common-sense rules about equipment; behaviour, training for the amateur climber; also several usefth appendices, tables, and a bibliography.

In Professor Haimendorf's pages we breathe a slightly less rare' fled air; the territory with which he deals does not exceed fi hundred square miles, the Subansiri region of North Assam Wing among the Himalayan foothills along the borders of India and Tibet. In 1944 the author was suddenly asked to leave a tror, , peaceful part of India and proceed to investigate a district utt` under administrative control. He was to discover whether '11c natives were friendly'—or not, and set off with remarkably lithe, in the way of staff or equipment. This account is a brilliant Neer' of a fine job of exploration, anthropological study, political clever' ness, and humane diplomacy; its chief value, for us here, is as I/. record of the structure, values and fascinations of a people living in a finely balanced community quite unlike anything else on record.

The Apa Tani folk don't bother with wheels or traction animals; they use little money, preferring mostly to barter; the men Weal: gorgeous tails of woven cane and highly decorative hats (and eitlii much else); instead of quarrels leading to blows and injuries, instilt, is worked up ingeniously by an elaborate ritual destruction °' valuables before the enemy's front door (shaming him into making an equally elaborate show of smashing valuable pots, Weap0115, etc.). They are excellent forest conservators; they till their lovely land carefully; they have only two classes—patricians and slaves —between whOm is little and who often intermarry; the death penalty is used carefully against absolute social nuisances', all in all, these people seem to have, evolved a pattern of civilised behaviour which should commend itself to European politicianis, in search of new formulas. The author's splendid job of field-Woe' is related in an equally splendid, restrained, and sympathetic account of a corner of the world which one hopes may long be