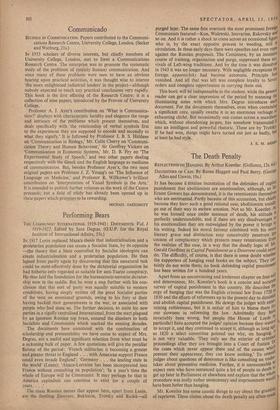 IN 1917 Lenin replaced Marx's thesis that industrialisation and a proletarian population can create a Socialist State, by its opposite —the theory that a State controlled by Socialist ideologists can create industrialisation and a proletarian population. He then lapsed from purity again by discovering that this unnatural task could be most effectively done by the dictatorial organisation he had hitherto only regarded as suitable for anti-Tsarist conspiracy. He thus laid the foundation for the bureaucratic-terrorist dictator- ship now in the saddle. But he went a step further with his con- clusion that this sort of party was equally suitable to western conditions, having simply written off the great Socialist parties of the west on emotional grounds, owing to his fury at their having backed their governments in the war, or associated with people who had done so. The further decision, to unite his new parties in a rigidly centralised International, from the start plagued by an ignorant Russian top brass, ensured the disasters to both Socialists and Communists which marked the ensuing decades.

The documents here annotated with the combination of scholarship and presentability we have come to expect of Mrs. Degras, are a useful and significant selection from what must be a sickening bulk of paper. A few quotations will give the peculiar flavour of the period : 'French militarism is becoming a greater and greater threat to England . . . with American support France could even invade England'; 'Germany . . . the leading state in the world' (Lenin); 'Alsace-Lorraine has been incorporated into France without consulting its population'; 'In a year's time the whole of Europe will be Communist. It may perhaps be that in America capitalism can continue to exist for a couple of years. . .

purged later. The same fate overtook the most prominent foreign, Communists featured—Kun, Walewski, Souvarine, Rakovsky and so on. And it is rather a shock to come across an occasional figure who is, by the exact opposite process to weeding, still In circulation. In these early days there were speeches and even votes against the Russian proposals. The Comintern, by an intensive course of training, organisation and purge, suppressed these sue: vivals of Left-wing traditions. And by the time it was dissolved in 1943 it was no longer necessary. With negligible exceptions the foreign apparatchiks had become automata. Principle had vanished. And all that was left was complete loyalty to Soviet orders and complete opportunism in carrying them out. This book will be indispensable to the student, while the general reader can get a clear impression of the period by scanning the illuminating notes with which Mrs. Degras introduces each document. For the documents themselves, even when containing a significant core, usually swathe* in an enormous verbiage of

exhausting clichd. But occasionally one comes across a manifesto i which, without abandoning jargon, has somehow transmuted t

into an intelligent and powerful rhetoric. These are by Trotsky If he had won, things might have turned out just as badly, but at least he had style.