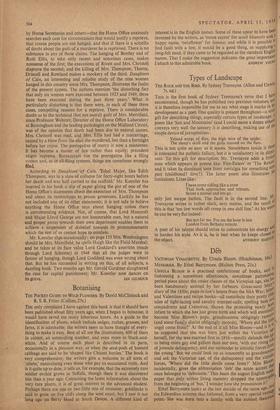 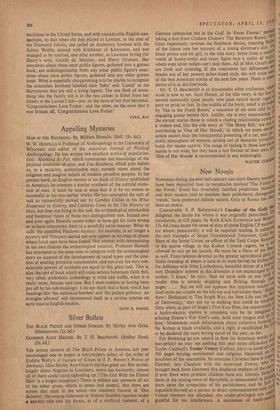 VICTORIAN VINAIGRETTE. By Ursula Bloom. (Hutchinson, 165.) MEMORIES. By Ethel Barrymore. (Hulton Press, 21s.) URSULA BLOOM is a practised confectioner of books, and, fashioning a sometimes affectionate, sometimes patronit period piece about the cosier classes of the Victorian age, she 17,,s been handsomely assisted by her forbears. Great-aunt Marys diary of the 1850s; papa-in-law's letters from the Sikh War; letted'e and Valentines and recipe books—all contribute their pretty lit'd tales of tight-lacing and cavalry trumpet-calls; spelling bees ego conundrums and Cremorne. Shown the protesting newly infant to which she has just given birth and which will eventetly become Miss Bloom's papa, grandmamma obligingly reMs.nit (and some family diarist obligingly records), 'Where did the 1111,o angel come from?' At the end of it all Miss Bloom—and it /5'e be supposed that she was born just within the Victorian 14e1 herself, for she was married first in 1916—stoutly defends the ler as being more gay and gallant than our own, 'with our rising till of juvenile delinquency, and our surrender to vitriolic forces fr°; the young.' But we could look up as innocently as grandinertin and ask the Victorian age, of the delinquency and the ,vitrioiic forces, 'Where did the little devils come from?' Miss 131°°,,filii incidentally, gives the abbreviation `deb' the acute accent I''s, once belonged to 'debutante.' This beats the august English oete paper that only within living memory dropped the apostroP" from the beginning of 'bus.' I wonder how she pronounces it? Ethel Barrymore looks at the last decade of the same age, alle the Edwardian autumn that followed, from a very special vallt" point. She was born into a family with the noblest

traditions in the United States, and with considerable English con- nections, so that when she first played in London, in the year of the Diamond Jubilee, she called on duchesses, lunched with the Sidney Webbs, danced with Kitchener of Khartoum, and was engaged to be married, one after another, to Laurence Irving (Sir Henry's son), Gerald du Maurier, and Harry Graham. Her anecdotes about these once public figures, gathered into a guinea book, are indistinguishable from any other public figure's anec- dotes about once public figures, gathered into any other guinea book. What is especially disappointing is to be unable to recognise the colourless brethren labelled here 'John' and 'Lionel' as the I3arrymores that are still a living legend. The one flash of some- thing like the family wit is in the two cables to Ethel from her father, at the Lambs Club—one, on the news of her first betrothal, 'Congratulations Love Father'; and the other, on the news that it was broken off, 'Congratulations Love Father.'