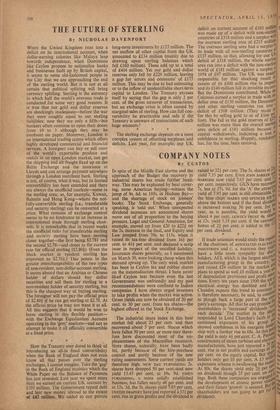 THE FUTURE OF STERLING

DAVENPORT WHEN the United Kingdom runs into a deficit on its international account, when dollar-earning colonies like Malaya leap towards independence, when Dominions like Ceylon propose to nationalise banks and businesses built up by British capital, it seems to some old-fashioned people in the City that we are approaching the end of the sterling world. But it is not at all certain that political splitting will bring currency splitting. Sterling is the eurrency in which half the world's overseas trade is conducted for some very good reasons. It is true that our gold and dollar reserves are shockingly inadequate-before the war they were roughly equal to our sterling liabilities; now they are only a fifth-but bankers often continue to open their doors from 10 to 3 although they may be insolvent on paper. Moreover, London is an international trading centre which offers highly developed commercial and financial services. A foreigner can buy or sell most of the world's exportable produce and metals in an open London market, can get the shipping and air freight fixed up on the Baltic Exchange and the insurance at Lloyds and can arrange payment anywhere through a London merchant bank. Sterling is not, of course, what it was, but its limited convertibility has been extended and there are always the unofficial markets-some in the sterling area; as, for example, Kuwait, Bahrein and Hong Kong-where the not- fully-convertible sterling • (i.e., transferable and security sterling) can be converted at a price. What remains of exchange control seems to be no hindrance to an increase in international trade through sterling chan- nels. It is remarkable that in recent weeks the unofficial rates for transferable sterling and security sterling have been moving closer together-the first being $2.784 and the second $2.78-and closer to the current rate for official sterling ($2.804). (Even the black market in resident sterling has improved to $2.764.) This points to the greater interchangeability of the two types of non-resident, non-dollar-account sterling. It seems absurd that an Arabian or Chinese holder of dollars should buy dollar securities and sell them for sterling to a non-resident holder of security sterling, but this is the cheapest way of buying sterling. The foreigner will not pay the official price of $2.804 if he can get sterling at $2.78. At the official price he may not want it at all. All this suggests that it would be wise to leave sterling in this flexible position- with the Exchange Equalisation Account operating in the 'grey' markets-and not to attempt to make it all officially convertible at a fixed price.

How the Treasury ever dared to think of introducing an all-in fixed convertibility when the Bank of England does not even know all that passes over the sterling exchanges, I cannot imagine. Take the 'gap' in the Bank of England statistics which the White Paper on the Balance of Payments has just revealed, Last year we spent more than we earned on current UK account by £103 million. The Government repaid debt and lent new money abroad to the extent of 142 million. We added to our private long-term investments by £125 million. The net outflow of other capital from the UK amounted to £134 million (mainly due to drawing upon sterling balances which fell 1160 million). These add up to a total of £404 million. Yet our gold and dollar reserves only fell by £229 million, leaving a gap for 'errors and omissions' of £175 million. This may be due to bad estimating or to the inflow of unidentifiable short-term capital to London. The Treasury excuses itself by saying that the gap is only 2 per cent. of the gross turnover of transactions, but an exchange crisis is often caused by marginal sales of sterling. How can full con- vertibility be practicable and safe if the Treasury is unaware of transactions of such huge amounts?

The sterling exchange depends on a most complex system of offsetting surpluses and deficits. Last year, for example, our UK deficit on current account of £103 million was made up of a deficit with non-sterlini countries of £318 million and a surplus with the overseas sterling area of £215 million, The overseas sterling area had a surplus If its trade with all non-sterling countries t1; £137 million, so that, allowing for our I deficit of .£318 million, the whole sterltil area ran into a deficit with the non-sterlinf world of £181 million against a surplus 10 1954 of £97 million. The UK was mainlY responsible for that shocking result reason of its £400 million rise in imports and its £140 million fall in invisible income' But the Dominions contributed. While 111,e Colonies earned a surplus in trade with tn4 dollar area of £130 million, the Dominions and other sterling countries ran into deficit of £108 million. (They made oP for this by selling gold to us of £166 111; lion). The fall in the gold reserves of million was more than the overall sterliof area deficit of £181 million because of capital withdrawals, indicating a loss 01 confidence in sterling. Happily, confidence has, for the time, been restored.