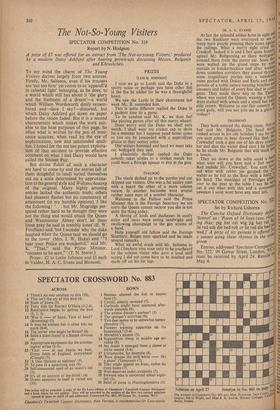 A prize of E5 was offered for an extract from 'The Not-so-young Visiters,' produced by a modern Daisy Ashfoird after hearing grown-ups discussing Messrs. Bulganin

To my mind the charm of The Young Visiters derives largely from two sources. Firstly, Mr. Salteena, even if his trousers are 'not too firm' yet comes to us 'apparell'd in celestial light' belonging, as he does, to a world which still has about it 'the glory and the freshness of a dream'—a world which William Wordsworth dimly remem- bered and—dare I say?—distorted, but which Daisy Ashford got down on paper before the vision faded. But it is a second characteristic which makes the work suit- able to the base purposes of this page. So often what is written by the pen of inno- cence acquires, when read by the eye of sophistication, new and unintended quali- ties. I hoped for the not too potent exploita- tion of that accident to provide effective comment on what I feel Daisy would have called the Sinister Pair.

But divine flukes of such a character are hard to come by and the entries (all of them delightful to read) sorted themselves out on a scale determined by approxima- tion to the general style and Weltanschauung of the original. Many highly amusing entries lacked the authentic truth; others had pleasant flashes but no consistency of attainment (in my, humble opinion). I like the following : • but Mr. Mugridge per- spired rather hard as he thought they were not the thing and would attack the Queen and Westminster Abbey don't let them loose pray he said in trembly tones' (E. W. Fordham) and 'but I wonder why the duke laughed when the Queen said we should go to the tower' (Mrs. I. W. Huke) and "I hear your Police are wonderful," said Mr. K. "That," said the Prime Minister, "remains to be seen." ' (T. N. Storer.) Prizes : £2 to Leslie Johnson and £1 each to Valdor, H. A. C. Evans and Blossom. PRIZES

I vote we go to Lords said the Duke in a sporty voice or perhaps you have other fish in the fire be added for he was a thourghtful hoast.

We saw the Lords in their choronates last week Mr. B. reminded him.

This is quite different replied the Duke in a pashent tone its a game. To be candied said Mr. K. we dont feel like playing games after all this merry whearl.

Dont worry said the Duke we shall only watch. I shall wear my cricket cap to show Im a member but I suppose youd better come as you are he proceeded with a supersillyus glance at their ootray attire.

Our visiters hummed and hard we must take our bodygard they said.

I absolutely declign replied the Duke nobody takes pistles to a cricket match but youll want a floreign apeace to pay at the gate.

The viacle dashed up to the portles and out skipped our visiters. One was a fat smiley man with a beard the other of a more solemn nature. In another baroushe were several rarther mere men of a somber character.

Welcome to the Pallace said the Prime Minister this is the Foreign Secertary we are sorry the Queen cannot recieve you she is not quite the thing today. A throng of lords and duchesses in costly attire and taras were eating sandwighs and swollowing champaign to the gay strains of a band.

Help yourself old fellow said the Foreign Secertary. Bulges eyes sparkled and he made several remarks.

What an awful crush said Mr. Salteena to Lord Clincham viva voce only to be overheard by the solemn visiter who gave a loud sniff saying I did not come here to be insulted and made of on his fat legs.

At last the splendid edifice hove in sight and the two Rushians were overjoyed to see• many mere peaple pressing there noses again s` the railings. What a merry sight cried Mt' Crushoff. Indeed it is and I feel quite hornelYci agreed Mr. Bullgarning as there bodygatit, assisted them from the motor car. Soon Of, were wafted up the grand steps by sor menials in knickerbockers and after walklq down countless corridors they passed throUP some magnificent portles into a sumshioet room packed with Dukes and Earls and al persons of a noble nature wearing britches all, coronets and ladies of every hue clad in cost!) gems. They made there way to the Thro0 where was seated the Queen, wearing a Wel, dress studied with jewels and a small but 010 able crown. Welcome to our fair country shf cried gaily,() aily, will you not join me in a glass (BLOSSOM) They both entered the dining room. Not, f, bad said Mr. Bulganin. The head wall rushed across in his silk britches I say he 0,, you cant come in hear dressed like that 1;'1:1 Crewschef took a gun out of his davy crock hat and shot the waiter dead cant I he lartc.`. ha ha ekode Mr. Bulganin that will teeth a lesson. They sat down at the table amid a 11.°,/1 what wine will you have said a 2nd Wallee Red replide Mr. Crewschef. You cant b„3 ,d red wine with rabbit pie garsped the ,410 waiter as he fell to the floor with a 130111.t ,,,,'d his head. The manidger of Porridges 811u:d over to the pear at the table I say be

i cut it out what with this and a common' yewnion I soon wont have any start left.