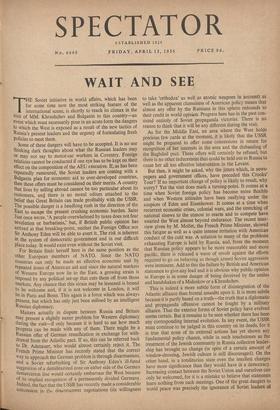 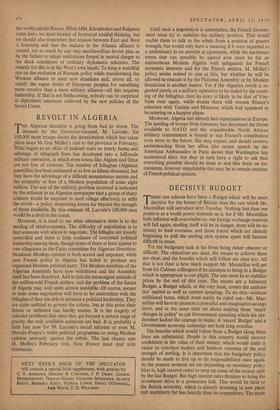 THE Soviet initiative in world affairs, which has been for some time now the most striking feature of the international scene, is shortly to reach its climax in the visit of MM. Khrushchev and Bulganin to this country—an event which must necessarily pose in an acute form the dangers to which the West is exposed as a result of the new tactics of Russia's present leaders and the urgency of formulating fresh policies to meet them.

Some of these dangers will have to be accepted. It is no use thinking dark thoughts about what the Russian leaders may or may not say to motor-car workers in Coventry. Foreign relations cannot be conducted if one eye has to be kept on their effect on the composition of the AEU executive. If, as has been repeatedly rumoured, the Soviet leaders are coming with a Bulganin plan for economic aid to over-developed countries, then these offers must be considered on their merits. A country that lives by selling abroad cannot be too particular about its customers, and there is no moral odium attached to the belief that Great Britain can trade profitably with the USSR. The possible danger is a headlong rush in the direction of the East to escape the present crushing economic burden. Saint Just once wrote, 'A people overwhelmed by taxes does not fear revolution or barbarians,' but, if British public opinion has arrived at that breaking-point, neither the Foreign Office nor Sir Anthony Eden will be able to avert it. The risk is inherent in the system of democratic government and in our difficult place today. It would exist even without the Soviet visit. For Britain finds herself here in the same position as the other European members of NATO. Since the NATO Countries can only be made an effective economic unit by repeated doses of American aid and since the natural markets Of Western Europe now lie to the East, a growing strain is imposed by any political set-up that cuts them off from those markets. Any chance that this strain may be lessened is bound to be welcome and, if it is not welcome in London, it will be in Paris and Bonn. This again is a force which was always Present, but which has only just been utilised by an intelligent Russian diplomacy.

Matters actually in dispute between Russia and Britain may present a slightly easier problem for Western diplomacy during the visit—if only because it is hard to see how much progress can be made with any of them. There might be a Russian offer of German reunification in exchange for with- drawal from the Atlantic pact. If so, this can be referred back to Dr. Adenauer, who would almost certainly reject it. The French Prime Minister has recently stated that the correct way to approach the German problem is through disarmament, and a Soviet refurbishing of Sir Anthony Eden's ill-fated suggestion of a demilitarized zone on either side of the German demarcation line would certainly embarrass the West because of its implied recognition of a permanently divided Germany. Indeed, the fact that the USSR has recently made a considerable uonzession in tht, disarmament negotiations (its willingness to take 'orthodox' as well as atomic weapons in account) as well as the apparent clumsiness of American policy means that almost any offer by the Russians in this sphere redounds to their credit in world opinion. Progress here has in the past con- sisted entirely of Soviet propaganda victories. There is no reason to think that it will be any different during the visit.

As for the Middle East, an area where the West holds precious few cards at the moment, it is likely that the USSR might be prepared to offer' some concessions in return for recognition of her interests in the area and the disbanding of the Baghdad pact. These offers will certainly be refused, but there is no other inducement that could be held out to Russia to cease her all too effective intervention in the Levant.

But then, it might be asked, why the jitters which, in news- papers and government offices, have preceded this Crooks' Tour? If no important change of policy is likely to result, why worry? Yet the visit does mark a turning-point. It comes at a time when Soviet foreign policy has become more flexible and when Western attitudes have been ossifying under the auspices of Eden and Eisenhower. It comes at a time when recurrent economic crises, colonial wars, and the stretching of national sinews to the utmost to rearm and to compete have wearied the West almost beyond endurance. The recent inter- view given by M. Mollet, the French Prime Minister, showed this fatigue as well as a quite intense irritation with American conduct of the cold war. A solution to many of the problems exhausting Europe is held by Russia, and, from the moment that Russian policy appears to be more reasonable and more pacific, there is released a wave of revolt against the efforts required to go on behaving as though armed Soviet aggression were imminent. Add to this the failure by British and American statesmen to give any lead and it is obvious why public opinion in Europe is in some danger of being deceived by the smiles and handshakes of a Malenkov or a Khrushchev.

This is indeed a more subtle form of disintegration of the Atlantic alliance than frontal assaults upon it. It is more subtle because it is partly based on a truth—the truth that a diplomatic and propaganda offensive cannot be fought by a military alliance. That the exterior forms of Soviet policy have evolved seems certain. But it remains to be seen whether there has been any corresponding internal evolution. In any event, the USSR must continue to be judged in this country on its deeds, for it is true that none of its external actions has yet shown any fundamental policy chance, while in such touchstones as the treatment of the Jewish community in Russia collective leader- ship has brought no change (in spite of a certain amount of window-dressing, Jewish culture is still discouraged). On the other hand, in a totalitarian state even the smallest changes have more significance than they would have in a democracy. Increasing contact between the Soviet Union and ourselves can only be welcomed, for it is a mistake to believe that statesmen learn nothing from such meetings. One of the great dangers to world peace was precisely the ignorance of Soviet leaders of the world outside Russia. When MM. Khrushchev and Bulganin come here, we must beware of hysterical wishful thinking, but we should also remember that tension between East and West is lessening and that the malaise in the Atlantic alliance is caused, not so much by any very machiavellian Soviet plan as by the failure to adapt institutions forged in mortal danger to the slack conditions of ordinary diplomatic relations. The remedy for this is in the West's own hands. To keep a watchful eye on the evolution of Russian policy while transforming the Western alliance to meet new situations and, above all, to satisfy the vague desire of European peoples for something more creative than a mere military alliance—all this requires leadership. If that is not forthcoming, nobody can be surprised at diplomatic successes achieved by the new policies of the Soviet Union.