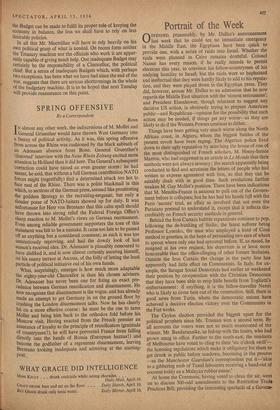 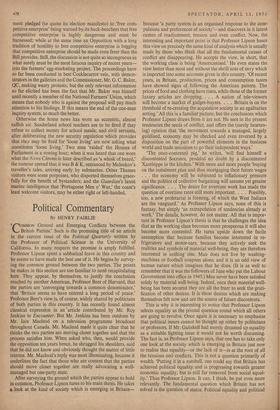 nFFENDED, presumably, by Mr. Dulles's announcement V last week that he could see no immediate emergency in the Middle East, the Egyptians have been quick to provide one, with a series of raids into Israel. Whether the raids were planned in Cairo remains doubtful. Colonel Nasser has every reason, if he really intends to permit elections this year, to convince his fellow-countrymen of his undying hostility to Israel; but the raids were so haphazard and ineffectual that they were hardly likely to add to his reputa- tion, and they were played down in the Egyptian press. They did, however, arouse Mr. Dulles to an admission that he now regards the Middle East situation with the 'utmost seriousness'; and President Eisenhower, though reluctant to suggest any decisive US action, is obviously trying to prepare American public—and Republican—opinion for the possibility that such action may be needed, if things get any worse—as they are likely to do if the Western Powers continue to dither.

Things have been getting very much worse along the North African coast, in Algiers, where the biggest battles of the present revolt have been raging. The Algerian police lived down to their ugly reputation by searching the house of one of the most distinguished of French scholars, M. Henry-Irenee Marrou, who had suggested in an article in Le Monde that their methods were not always savoury : the search apparently being conducted to find and scrutinise the letters of people who had written to express agreement with him, so that they can be suitably dealt with in good time. Such revelations further weaken M. Guy Mollet's position. There have been indications that M. Mendes-France is anxious to pull out of the Govern- ment before it collapses; but he has had his hands full with the Paris 'secrets' trial, an affair so involved that not even the Parisians pretend to understand it, except that it reflects dis- creditably on French security methods in general.

Behind the Iron Curtain bubble reputations continue to pop, following the de-bunking of Stalin; the latest sufferer being Professor Lysenko, the man who employed a kind of Cone method in genetics, in the hope of persuading two ears of wheat to sprout where only one had sprouted before. If, as stated, he resigned at his own request, his departure is at least more honourable than the office-clinging of other former Stalinists. Outside the Iron Curtain the change in the party line has apparently had little effect on Communists. In Italy, for ex- ample, the Saragat Social Democrats had earlier so weakened their position by co-operation with the Christian Democrats that they have been able to reap little benefit from Togliatti's embarrassment : if anything, it is the fellow-traveller Nenni who is likely to come best out of the commotion. Still, there is good news from Turin, where the democratic unions have achieved a decisive election victory over the Communists in the Fiat works.

The Ceylon election provided the biggest upset for the political prophets since Mr. Truman won a second term. By all accounts the voters were not so much enamoured of the winner, Mr. Bandaranaike, as fed-up with the losers, who had grown smug in office. Farther to the south-east, the residents of Melbourne have voted to cling to their 'six o'clock swill'— the licensing regulations which make it obligatory for them to get drunk in public before sundown, becoming in the process —as the Manchester Guardian's correspondent put it—`akin to a gibbering mob of Tamil labourers receiving a hand-out of coconut toddy on a Malayan rubber estate.'

At home the Commons, having voted to clean the air, went on to discuss 300-odd amendments to the Restrictive Trade Practices Bill; providing the interesting spectacle of a Govern- ment pledged (to quote its election manifesto) to 'free com- petitive enterprise' being warned by its back-benchers that free competitive enterprise is highly dangerous and must be harnessed; while at the same time an Opposition with a long tradition of hostility to free competitive enterprise is begging that competitive enterprise should be made even freer than the Bill provides. Still, the discussion is not quite so incongruous as what surely must be the most fatuous inquiry of recent years— into the farmers' egg-marketing project. The proceedings have so far been conducted in best Cocklecarrot vein, with demon- strators in the galleries and the Commissioner, Mr. G. C. Baker, QC, making weary protests; but the only relevant information so far elicited has been the fact that Mr. Baker was himself until recently a member of the National Farmers' Union, which means that nobody who is against the proposal will pay much attention to his findings. If this means the end of the one-man inquiry system, so much the better.

Otherwise the home news has worn an eccentric, almost raffish air. Sunderland school teachers are to be fired if they refuse to collect money for school meals; and civil servants, after deliberating the new security regulation which provides that they may be fired for 'loose living' are now asking what constitutes 'loose living.' Two men 'raided' the Houses of Parliament in a rowing boat; when it was heard that one wore what. the News Chronicle later described as 'a whisk of beard,' the rumour spread that it was B & K, entranced by Malenkov's traveller's tales, arriving early by submarine. Other Thames visitors were some porpoises, who disported themselves grace- fully for the benefit of bystanders; and the Guardian's latest marine intelligence that 'Portuguese Men o' War,' the coast's least welcome visitors, may be either right or left-handed.