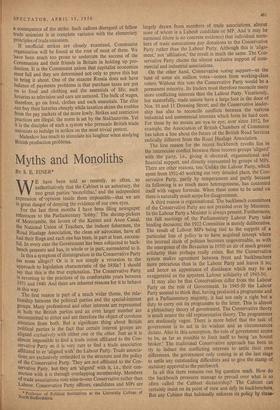 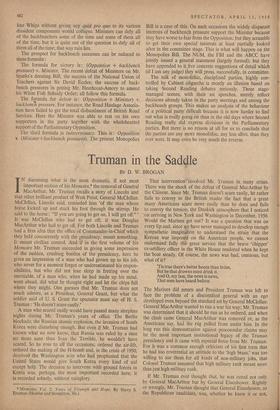 By S. E. FINER* E have been told so recently, so often, so authoritatively that the Cabinet is an autocracy, the two great parties 'monolithic,' and the independent expression of 'opinion inside them impossible—that we are in great danger of denying the evidence of our own eyes.

For the last three months I have been filing newspaper references to the Parliamentary 'lobby.' The shrimp-pickers of Morecambe, the lovers of the Kennet and Avon Canal, the National Union of Teachers, the inshore fishermen, the Road Haulage Association, the clean air advocates, have all had their flings and each one has been, in part at least, success- ful. In every case the Government has been subjected to back- bench pressure and has, in whole or in part, surrendered to it.

Is this a symptom of disintegration in the Conservative Party (as some allege)? Or is it not simply a reversion to the approach to legislation characteristic of the 1930s? I should say that this is the true explanation. The Conservative Party is reverting to the practices of its comfortable years between 1931 and 1940. And there are inherent reasons for it to behave in this way. The first reason is part of a much wider theme, the rela- tionship between the political parties and the special-interest groups. Many professional and other interests are represented in both the British parties and an even larger number are uncommitted to either and are therefore the object of covetous attention from both. But a significant thing about British political parties is the fact that certain interest groups are aligned exclusively with either one or the other. Just as it is almost impossible to .find a trade union affiliated to the Con- servative Party so it is very rare to find a trade association affiliated to or 'aligned with' the Labour Party. Trade associa- tions are exclusively embedded in the structure and the policy of the Conservative Party. They are not affiliated to the Con- servative Party, but they are 'aligned' with it, i.e., their con- nection with it is through overlapping membership. Members of trade associations vote nine-to-one Conservative rather than Labour. Conservative Party officers, candidates and MPs are * Professor of Political lnstitutihns at the University College of North Staffordshire. largely drawn from members of trade associations, almost none of whom is a Labour candidate or MP. And it may be surmised (there is no concrete evidence) that individual mem- bers of trade associations pay donations to the Conservative Party rather than the Labour Party. Although this is 'align- ment,' not 'affiliation,' the result is much the same. The Con- servative Party claims the almost exclusive support of com- mercial and industrial associations.

On the other hand, Conservative voting support—to the tune of some six million votes—comes from working-class voters. Without this vote the Conservative Party would be a permanent minority. Its leaders must therefore reconcile many more conflicting interests than the Labour Party. Vicariously, but masterfully, trade unions have a large foot in the door of Nos. 10 and 11 Downing Street; and the Conservative leader- ship has also to reconcile conflicts between the various industrial and commercial interests which form its hard core. For these by no means see eye to eye; ever since 1952, for example, the Association of British Chambers of Commerce has taken a line about the future of the British Road Services radically different from the Road Haulage Association.

The first reason for the recent backbench revolts lies in the internecine conflict between these interest-groups 'aligned' with the party, i.e., giving it electoral, organisational and financial support, and directly represented by groups of MPs. There are other reasons, too. Unlike the Labour Party, which spent from 1931-45 working out very detailed plans, the Con- servative Party, partly by temperament and partly because its following is so much more heterogeneous, has contented itself with vaguer formula'. When these come to be acted on there is naturally much scope for disagreement.

A third reason is organisational. The backbench committees of the Conservative Party are not presided over by Ministers. In the Labour Party a Minister is always present. Furthermore, the full meetings of the Parliamentary Labour Party take binding decisions; the 1922 Committee is merely deliberative. The result of Labour MPs being tied to the support of a particular line of policy is to have acquired (except where the internal clash of policies becomes ungovernable, as with the emergence of the Bevanites in 1950) an air of much greater solidarity than perhaps really exists. But the Conservative system makes agreement between front and backbenchers more precarious than in the Labour Party and leaves it so; and hence an appearance of dissidence which may be as exaggerated as the apparent Labour solidarity of 1945-50.

It may also be that Conservatives differ from the Labour Party on the role of Government. In 1945-50 the Labour Party seemed to think that, having produced a programme and got a Parliamentary majority, it had not only a right but a duty to carry out its programme to the letter. This is almost a plebiscitary theory of government. The Conservative theory is much nearer the old representative theory. The programmes are studiously vague. There is more belief that the task of government is to act in its wisdom and as circumstances dictate. Also in this conception, the role of government seems to be, as far as possible to limit itself to being 'an honest broker.' The traditional Conservative approach has been to try to induce the conflicting interests to settle their own differences, the government only coming in at the last stage to settle any outstanding difficulties and to give the stamp of statutory approval to the patchwork.

In all this there remains one big question mark. How do the backbench pressures manage to prevail over what is so often called the Cabinet dictatorship? The Cabinet can certainly insist on its point of view and defy its backbenchers. But any Cabinet that habitually enforces its policy by three- line Whips without giving any quid pro quo to its various dissident components would collapse. Ministers can defy all of the backbenchers some of the time and some of them all of the time, but it is quite out of the question to defy all of them all of the time; that way ruin lies.

The prospect for backbench successes can be reduced to three formula✓ : The formula for victory is:, (Opposition + backbench pressure) v. Minister. The recent defeat of Ministers on Mr. Sparks's derating Bill; the success of the National Union of Teachers against Sir David Eccles; the success of back- bench pressures in getting Mr. Heathcoat-Amory to amend his White Fish Subsidy Order; all follow this formula.

The formula for defeat is: (Opposition + Minister) v. backbenA pressure. For instance, the Road Haulage Associa- tion have failed to get the total disbandment of British Road Services. Here the Minister was able to rest on his own supporters in the party together with the wholehearted support of the Parliamentary Opposition.

The third forniula indeterminacy. This is : Opposition v. (Minister+backbench pressures). The present Monopolies Bill is a case of this. On such occasions the widely disparate interests of backbench pressure support the Minister because they have worse to fear from the Opposition; but they scramble to get their own special interests at least partially looked after in the committee stage. This is what will happen on the Monopolies Bill. The NUM, the FBI and the ABCC have jointly issued a general statement (largely formal); but they have appended to it five concrete suggestions of detail which (if I am any judge) they will press, successfully, in committee.

The talk of monolithic, disciplined parties, highly con- trolled by Cabinet oligarchs is mostly an illusion based on taking -Second Reading debates seriously. These stage- managed scenes, with their set speeches, merely reflect decisions already taken in the party meetings and among the backbench groups. This makes an analysis of the behaviour of a political party difficult because it is now harder to find out what is really going on than in the old days where Second Reading really did express divisions in the Parliamentary parties. But there is no reason at all for us to conclude that the parties are any more monolithic, any less alive, than they ever were. It may even be very much the reverse.