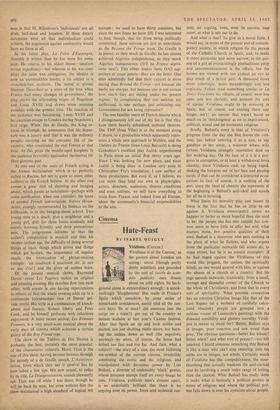 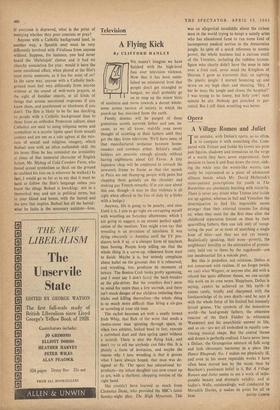 Viridiana. (Curzon.) `Viridiana is at the Curzon,' as the posters about London are saying: uncut (though pretty dimly subtitled) and preceded by the sort of succes de scan- dale publicity men dream about on cold nights. Its back- ground alone is extraordinary enough: a snook- cockingly `blasphemous' film made in Franco's Spain which somehow, by some series of remarkable concidences, surely (did all the cen-. sors have 'flu at once? did someone lose the script on a train?), got out of the country to instant acclaim at last year's Cannes festival. After that Spain sat up and took notice and started, not just shutting stable doors, but burn- ing the stables down as well (the negatives, anyway)—by when, of course, the horse had bolted too fast and too far. And then, what a subject! —the story of a nun, the most titillating sex-symbol of the current cinema, irresistibly combining the erotic and the religious, and manipulated with ferocious power by Luis Bufiuel, a director of undeniably `black' genius, whose presence stamps itself on every image he uses. Viridiana, publicity men's dreams apart, is so undeniably brilliant that there is no arguing over its power, force and technical sue- cess; no arguing, even, over its success, tout court, at what it sets out to do.

And what is that? To give us a moral fable. I would say, in terms of the present and of contem- porary society, in which religion (in the person of the Catholic Church in Spain, and, to make it more particular and more narrow, in the per- son of a girl of excruciatingly platitudinous piety and sanctimoniousness) is the villain, but the heroes are viewed with too cynical an eye to play much of a heroic part. A thousand times more falteringly, more meanderingly and less explicitly. Fellini tried something similar in La Do/c' e Vita (only his villains, of course, were less open and less clerical), and aroused the sort of uproar V truhuna ought to be arousing in Spain, but, of course, not existing there any longer, isn't : an uproar that wasn't based so much on its `shockingness' as on its implications, political, moral and (at moments) religious Briefly, Bufluel's story is that of Viridiana's -progress from the day she first leaves the con- vent, just before entering it as a nun, to say goodbye to her uncle, a widower whose wife (whom Viridiana strangely resembles) died on her wedding day. On the face of it it is a pro- gress in corruption, or at least a withdrawal from chastity, since Viridiana ends up being raped, shaking the hairpins out of her hair and playing cards, if that can be considered a depraved occu- pation. In fact, of course, it is nothing of the sort, since the ideal of chastity she represents at the beginning is Bufiuel's anti-ideal and stands for all he is berating.

What limits his morality play and blunts its force is the fact that he has so little to set against it. Viridiana emancipated seems no happier or better or more hopeful than she used to be; the people she has met outside her con- vent seem to have little to offer her and, what matters more, few positive qualities of their own. Bufiuel is a destroyer who puts nothing in the place of what he flattens, and who argues from the particular outwards (all artists do, to some extent, but he is an outsize example): if he had raged against the Viridianas of this world (the priggish, the useless, the spiritually blind), no one would quarrel with him; or' against the abuses of •a church or a country. But his rage spreads outwards, frantically, from a small, corrupt and shameful corner of the Church to the whole of Christianity, and from that to every sort of spirituality. What possible connection has an emotive Christian image like that of the Last Supper (at a moment of carefully calcu- lated obscenity people are grouped into a tableau vivant of Leonardo's painting) with the diseased sensibility and phoney morality Viridi- ana is meant to stand for? Better, Bufiuel says in images, pour concrete and saw wood than pray. The obvious questions—better for whom? better when? and what sort of prayer?—are left unasked. I heard someone remarking that Bufwel is like a man who can't stop swearing, only his oaths are in images, not words. Certainly much of Viridiana has this compulsiveness, the nose- thumbing that actually weakens the anti-clerical case by involving a much wider range of feeling than the clerical. What Bufitiel has really done is make what is basically a political protest in terms of religion; and where the political pro- test falls down is over his cynicism about people. If everyone is depraved, what is the point of worrying whether they pour concrete or pray?

Anyone with a Catholic background (and, in another way, a Spanish one) must be very differently involved with Viridiana from anyone without. Suppose, for instance, you had never heard the 'Hallelujah' chorus and it had no din rchy association for you: would it have the same emotional effect, when played at the film's most erotic moments, as it has for most of us? In the same way, anyone with a Catholic back- ground must feel very differently from anyone without at the sound of well-worn prayers, at the sight of familiar objects, at all kinds of things that arouse emotional responses if you know them, and puzzlement or blankness if you don't. The film is likely to be far less shocking to people with a Catholic background than to those from an orthodox Protestant culture, since Catholics are used to using religious terms and symbolism in a secular (quite apart from sexual) context and are not as a rule aghast at the mix- ture of sexual and religious imagery, which Butluel uses with an often outlandish skill. (In his lesser films he has reminded me irresistibly at times of that immortal character of English fiction, Mr. Mybug of Cold Comfort Farm, who found sexual symbolism so thick on the ground he stubbed his toes on it wherever he walked.) In fact, I would go so far as to say that it must be hard to follow the film's language unless you know the things Bufiuel is knocking: not in a theoretical way and not in political terms, but in your blood and bones, with the hatred and the love that implies. Bufiuel has all the hatred: what he lacks is the necessary antidote—love.