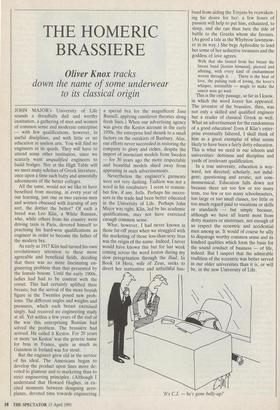 down the name of some underwear to its classical origin

JOHN MAJOR's University of Life sounds a dreadfully dull and worthy institution, a gathering of men and women of common sense and moderate enterprise — with few qualifications, however, in useful disciplines, and with little or no education in useless arts. You will find no engineers in its quads. They will have to attend some other institution, since we scarcely want unqualified engineers to build bridges. Nor at the High Table will we meet many scholars of Greek literature, once upon a time such batty and unworldly adornments of the better colleges.

All the same, would not we like to have benefited from meeting, in every year of our learning, just one or two curious men and women obsessed with learning of any sort, the dottier the better? Of such a breed was Leo Klin, a White Russian, who, while others from his country were driving taxis in Paris, devoted himself to practising his hard-won qualifications as engineer in order to become the father of the modern bra.

As early as 1917 Klin had turned his own revolutionary attention to these more agreeable and beneficial fields, deciding that there was no more fascinating en- gineering problem than that presented by the female bosom. Until the early 1900s, ladies had had to be content with the corset. This had certainly uplifted their breasts; but the arrival of the more boyish figure in the Twenties posed new prob- lems. The different angles and weights and pressures, which each breast exercised singly, had received no engineering study at all. Yet within a few years of the end of the war this enterprising Russian had solved the problem. The brassiere had arrived. He called it Kestos. For 20 years or more 'un Kestos' was the generic name for bras in France, quite as much as Guinness in Ireland was for stout.

But the engineer grew old in the service of his ideal. The Americans began to develop the product upon lines more de- voted to glamour and to marketing than to strict engineering principles. (Although I understand that Howard Hughes, in ex- cited moments between designing aero- planes, devoted time towards engineering a special bra for the magnificent Jane Russell, applying cantilever theories along fresh lines.) When our advertising agency was given the Kestos account in the early 1950s, the enterprise had shrunk to a small factory on the outskirts of Banbury. Alas, our efforts never succeeded in restoring the company to glory and riches, despite the import of insouciant models from Sweden — for 30 years ago the more respectable and beautiful models shied away from appearing in such advertisements.

Nevertheless the engineer's garments were not very dashing. Fashion was not a word in his vocabulary. I seem to remem- ber few, if any, frills. Perhaps his succes- sors in the trade had been better educated in the University of Life. Perhaps John Major was right; Klin, led by his academic qualifications, may not have exercised enough common sense.

What, however, I had never known in those far-off years when we struggled with the marketing of those less-than-sexy bras was the origin of the name. Indeed, I never would have known this but for last week coming across the word keston during my slow peregrination through the Iliad. In Book 14 Hera, wife of Zeus, seeks to divert her inattentive and unfaithful hus- band from aiding the Trojans by reawaken- ing his desire for her; a few hours of passion will help to put him, exhausted, to sleep, and she can then turn the tide of battle to the Greeks whom she favours. (As good a tale as the Whybrow lawnmow- er in its way.) She begs Aphrodite to lend her some of her seductive treasures and the goddess of love agrees.

With that she loosed from her breast the breast band [keston himanta], pierced and alluring, with every kind of enchantment woven through it. . . There is the heat of love, the pulsing rush of loving, the lover's whisper, irresistible — magic to make the sanest man go mad.

This is the only passage, so far as I know, in which the word kestos has appeared. The inventor of the brassiere, then, was not only a skilled and qualified engineer but a reader of classical Greek as well. What an advertisement for the randomness of a good education! Even if Klin's enter- prise eventually faltered, I shall think of him as a great exemplar of what seems likely to have been a fairly dotty education. This is what we need in our schools and universities: dottiness and discipline and yards of irrelevant qualification.

In a true university, education is way- ward, not directed; scholarly, not indul- gent; questioning and erratic, not com- monsensical. Education falls down not because there are too few or too many tests, too few or too many schoolmasters, too large or too small classes, too little or too much regard paid to vocations or skills or standards — but simply because, although we have all learnt most from dotty masters or mistresses, not enough of us respect the eccentric and accidential men among us. It would of course be silly to disparage worthy common sense and its kindred qualities which form the basis for the sound conduct of business — of life, indeed. But I suspect that the admirable tradition of the eccentric was better served in our older universities than it is, or will be, in the new University of Life.