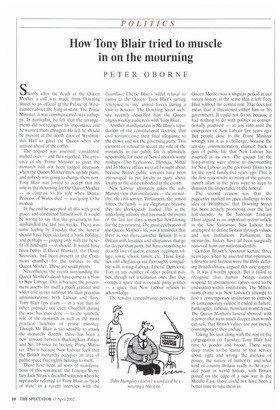 How Tony Blair tried to muscle in on the mourning

Shortly after the death of the Queen Mother a call was made from Downing Street to an official at the Palace of Westminster about the lying-in-state. The Prime Minister, it was communicated, was unhappy. In particular, he felt that the arrangements did not recognise his importance and he wanted them changed. He felt he should be present at the north door of Westminster Hall to greet the Queen when she arrived ahead of the coffin.

The request was assessed, considered, mulled over — and then rejected. The presence of the Prime Minister to greet the monarch had not been judged necessary when the Queen Mother drew up her plans, and nobody was going to change them now. Tony Blair was forced to accept that his role in the mourning for the Queen Mother — in contrast to his role when Diana. Princess of Wales died — was going to be modest.

In the end he accepted all this with good grace, and conducted himself well. It would be wrong to say that the government has mishandled the last two weeks. There was some feeling by Tuesday that the funeral should have been declared a bank holiday, and perhaps — judging only with the benefit of hindsight — it should. It would have been better if David Blunkett, the Home Secretary, had been present in the Commons chamber for the tributes to the Queen Mother. These are small points.

Nevertheless, the events surrounding the Queen Mother's death have come as a blow to New Labour. This is because the government asserts for itself a much grander and wider role in our national life than previous administrations, both Labour and Tory. Tony Blair lays claim — in a way that no other premier, not even Churchill during the war, has ever done — to the symbolic role of the monarch as well as the more practical function of prime minister. Though Mr Blair is too sensible to attack the monarchy directly, there has been a new tension between Buckingham Palace and No. 10 since he became Prime Minister. This is because New Labour feels that the British monarchy occupies an area of public space that rightly belongs to itself.

There have been all sorts of manifestations of this sentiment: the Foreign Secretary Jack Straw's dreadful solecism when he repeatedly referred to Tony Blair as 'head of state' in a recent interview with the Guardian; Cherie Blair's wilful refusal to curtsy to the Queen; Tony Blair's jarring reference to 'my' armed forces during a visit to Kosovo. The Downing Street website recently described how the Queen enjoys weekly audiences with Tony Blair.

Another manifestation is Mr Blair's repudiation of the constitutional doctrine that civil servants owe their final allegiance to the crown and not the governing party. This element of refusal to accept the role of the monarchy in our public life is ultimately responsible for most of New Labour's worst mishaps. The Ecciestone, Hinduja, Mittal and Jo Moore affairs were all brought about because British public servants have been encouraged to put loyalty to party above loyalty to the state embodied in the crown.

New Labour ultimately takes the subMarxist view that institutions — the monarchy, the civil service, Parliament, the armed forces, the family — are illegitimate because they are ideologically loaded. This is the underlying attitude that has made the events of the last ten days somewhat bewildering for the government. The great celebration of the Queen Mother's life was a reminder that there is, out there, another Britain. It is a Britain with loyalties and allegiances that go far deeper than party, but have everything to do with love of queen, country, regiment, village, town, school, family, etc. Those loyalties and allegiances are thoroughly compatible with voting Labour, Liberal Democrat, Tory or any number of other political parties, though not totalitarian ones. But they occupy a space that is outside party politics — a space that New Labour refuses to acknowledge.

The ten-day remembrance period for the

Queen Mother was a singular period in our recent history in the sense that it left Tony Blair without the central role. That does not mean that it threatened either him or his government. It could not do so, because it had nothing to do with politics as conventionally practised — at any rate until the emergence of New Labour five years ago. But people close to the Prime Minister wrongly saw it as a challenge, because the ten-day commemoration claimed back a part of public life that New Labour has asserted as its own. The queues for the lying-in-state were almost as disconcerting for New Labour as the grief over Diana was for the royal family five years ago. That is the first reason why so many of the government's allies in the press were so keen to diminish the importance of the funeral.

The second reason was that the pageantry marked an open challenge to the idea of 'Britishness' that Downing Street has been actively promoting over the last half-decade. As the historian Tristram Hunt argued in an important recent article in the New Statesman, New Labour has attempted to define Britain through values, and not institutions. Parliament, the monarchy, history have all been surgically removed from our national identity.

Gordon Brown's Spectator lecture three years ago, when he asserted that openness, tolerance and fairness were the three defining British virtues, argued this case cogently. It was a worthy speech. But it failed to recognise that human beings cannot respond to abstractions: values need to be embedded within institutions. The Millennium Dome was New Labour's attempt to find a contemporary institution to embody its contemporary values; it ended in failure, bankruptcy, ridicule, humiliation and fraud. The Queen Mother's funeral showed, with a power that went much deeper than words can tell, that British values are not merely contemporary: they endure.

Taking his seat along with the rest of the congregation on Tuesday, Tony Blair had time to ponder and brood. There were deep truths to be learnt at that service about right and wrong, the exercise of power, the nature of authority, and what kind of country Britain really is. At a pivotal point in world history, with Britain poised on the edge of a new war in the Middle East, there could not have been a better time to take them in,