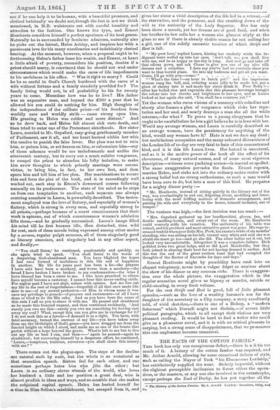 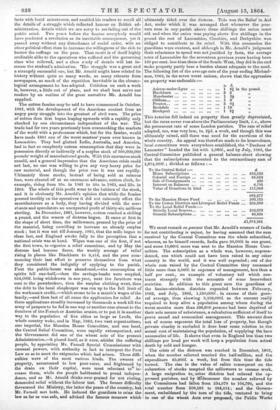 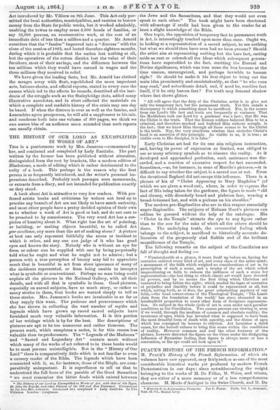 THE FACTS OF THE COTTON FAMINE.*

Tins book has only one conspicuous defect,—there is a little too much of it. A history of the cotton famine was required, and Mr. Arthur Arnold, allowing for some occasional defects of style, such as calling the Mayor of York "his Eboraceous Lordship," has satisfactorily supplied the want. Strictly impartial, without the slightest perceptible inclination to flatter either the opera- tives, or the masters, or any one else involved in the catastrophe, except perhaps the Earl of Derby, he has put together all the * The History of the Colton Famine. By A. Arnold. London: Saunders, Pt*, sat Co.

facts with lucid minuteness, and enabled his readers to recall all the details of a struggle which reflected honour on British ad- ministration, details which we are sorry to see fading out of the public mind. Two years before the famine everybody would have predicted a revolution as its inevitable consequence, yet it passed away without any disturbance of social order, with no other political effect than to increase the willingness of the rich to bestow the suffrage on the poor. That result is of itself highly creditable alike to the operatives who suffered and the governing class who relieved, and a close s!udy of details will but in- crease the student's admiration. The struggle was a great and a strangely successful one, but Mr. Arnold might have related its history without quite so many words, so many extracts from newspapers, so much of the repetition inevitable in the chrono- logical arrangement he has adopted. Criticism on such a work is, however, a little out of place, and we shall best serve our readers by an outline of the great narrative Mr. Arnold has supplied.

The cotton famine may be said to have commenced in October, 1861, with the development of the American contest from an angry party struggle into the greatest of civil ware. The price of cotton then first began leaping upwards with a rapidity only checked by one circumstance independent of the war. The trade had for two years previously been overstocking the markets of the world with a profuseness which, but for the famine, would have made 1862 one of the worst masters' years ever known in Lancashire. They had glutted India, Australia, and America, had in fact so completely outrun consumption that they were in possession directly or indirectly of a surplus stock of 300,000,000 pounds' weight of manufactured goods. With this enormous stock unsold, and a general impression that the American crisis could not last, no one was willing to give any very heavy price for raw material, and though the price rose it was not rapidly. Ultimately these stocks, instead of being sold at ruinous loss, were cleared off at an enormous advance, cotton cloth, for example, rising from 16s. in 1861 to 20s. in 1862, and 22s. in 1863. The whole of this profit went to the holders of the stock, and it is obviously Mr. Arnold's opinion that while the famine pressed terribly on the operatives it did not ruinously affect the manufacturers as a body, they having divided with the mer- chants and speculators an unexpected profit of thirty-six millions sterling. In December, 1861, however, cotton reached a shilling a pound, and the season of distress began. It came at first in the shape of short time, the millowners, pressed by the price of the material, being unwilling to increase an already surplus stock ; but it was not till January, 1862, that the mills began to close fast, and England awoke fully to the perception that a national crisis was at hand. Wigan was one of the first, if not the first town, to organize a relief committee, and by May the distress had become fierce, the weekly average of relief rising in places like Blackburn to 0,414, and the poor com- mencing their last effort to preserve themselves from what they considered the indignity of applying to the parish. First the public-house was abandoned,—the consumption of spirits fell one-half,—then the savings-banks were emptied, 854,0001. being withdrawn in one year, next the furniture was sent to the pawnbrokers, then the surplus clothing went, then the debt to the local shopkeeper was run up to the full limit of the workman's credit,—which seems to be a month's wages of the family,—and then last of all came the application for relief. As these applications steadily increased by thousands a week till the army of paupers to be fed in one way or another rose almost to the 'lumbers of the French or Austrian armies, or to put it in another way to the population of five cities as large as Leeds, the whole country woke, and in May, 1882, two vast organizations, one imperial, the Mansion House Committee, and one local, the Central Relief Committee, were rapidly extemporized, and the Government did one of the wisest acts of the present Administration,—it placed itself, as it were, atinidat the suffering people, by appointing Mr. Farnall Special Commissioner with unusual powers, with authority in fact to interpret the Poor Law so as to meet the exigencies which had arisen. These diffi- culties were of the most various kinds. The owners of property, accustomed to low poor-rates, and frightened by the drain on their capital, were most reluctant to in- crease them, while the people habituated to proud indepen- dence, and as Mr. Arnold thinks over-praised for not rioting, demanded relief without the labour test. The former difficulty threatened the Ministry, the latter the peace of the country, but Mr. Farnall met both. He induced the guardians to relax the law as far as was safe, and advised the famous measure which ultimately tided over the distress. This was the Relief in Aid Act, under which it was arranged that whenever the poor- rate rose in any parish above three shillings the union must aid, and when the union was paying above five shillings in the pound the rest of Lancashire, Cheshire, and Derbyshire was. obliged to contribute to its relief. With this concession the guardians were content, and although in Mr. Arnold's judgment their reluctance to spend was not justified by facts, the average rates of Lancashire for the seventeen previous years having been 120 per cent. less than those of the South-West, they did in the end make property partly bear a burden almost adequate to the need. The following list of the average rate of the year ending Michael- mas, 1862, in the seven worst unions, shows that the oppression on property was endurable s. d.

This taxation fell indeed on property then greatly depreciated,. but the rates never rose above the Parliamentary limit, i. e., above the permanent rate of some London parishes. The rate of relief

adopted, too, was very low, ls. 2d. a week, and though this was ultimately raised, still there was need for the exertions of the whole country. An appeal was therefore made to its benevolence, local committees were everywhere established, the " Duchess of Lancaster" headed the list with 2,0001., and by July, 1863, the Central Committee published a general balance-sheet showing that the subscriptions amounted to the extraordinary sum of

To the Local Relief Funds:—

We must remark en peasant that Mr. Arnold's censure of India for not contributing is unjust, he having assumed that the sum received by the Central Committee was the whole subscribed, whereas, as he himself records, India gave 20,0001. in one grant, and some 10,0001. more was sent to the Mansion House Com- mittee. The subscription as a whole was, however, unprece- dented, one which could not have been raised in any other country in the world, and it was well expended ; out of the whole sum raised by the Central Committee they consumed little more than 2,0001. in expenses of management, less than a half per cent., an example of voluntary toil which con- trasts strangely with the accounts of some benevolent societies. In addition to this great sum the guardians of the famine-stricken districts expended between February, 1862, and July, 1863, 1,250,0001. in excess of their gene- ral average, thus showing 3,250,000/. as the amount really required to keep alive a population among whom during the worst months more than 500,000 persons had been deprived of their sole means of subsistence, a calculation sufficient of itself to prove sound and economical management. This amount does not of course represent the total loss of property, but though private charity is excluded it does bear some relation to the actual cost of maintaining the population, of supplying the bare necessaries of life. It shows that even in England less than two shillings per head per week will keep a population from actual death by cold and hunger.

The crisis of the distress was reached in December, 1862, when the number relieved touched the half-million, and the expenditure 65,0001. a week, but from this time the tide turned. The rise in the value of calico consequent on the exhaustion of' stocks tempted the millowners to resume work. A large emigration to. other districts had relieved the op- pressed parishes, and by Midsummer the number relieved by the Committees had fallen from 234,078 to 104,792, and the total number from 506,091 to 264,014; and the Govern- ment, emboldened by the turn of the tide, ventured to bring in one of the wisest Acts ever proposed, the Public Works

Act introduced by Mr. Villiers on 8th June. This Act only per- mitted the local authorities, municipalities, and vestries to borrow money from the State for public works, but it worked admirably, enabling the towns to employ some 5,000 heads of families, or say 25,000 persons, on remunerative work, at the cost of an immediate debt of less than a million and a quarter. Mr. Arnold considers that the "famine" improved into a " distress " with the close of the session of 1803, and lasted therefore eighteen months, during which it is probable that the nation lost nothing at all, but the operatives of the cotton district lost the value of their furniture, most of their savings, and the difference between the ten millions which they would have earned in wages and the three millions they received in relief.

We have given the leading facts, but Mr. Arnold has clothed the meagre array with flesh, republished the more important acts, balance-sheets, and official reports, stated in every case the causes which led to the effects he records, described all the inci- dents of the struggle such as the Staleybridge riots, added many illustrative anecdotes, and in short collected the materials on which a complete and readable history of the crisis may one day be based. If when the distress is over as well as the famine, and Lancashire again prosperous, he will add a supplement to his tale, and condense both into one volume of 300 pages, we think we can assure him of an audience more extended than such reports can usually obtain.