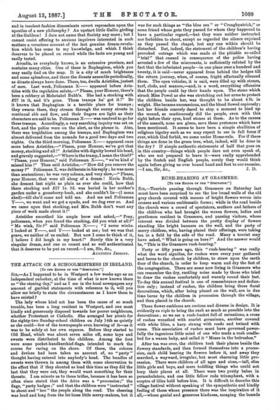 THE ATTACK ON A SCHOOLMISTRESS IN IRELA.ND. [To TIM EDITOR

Srs,—As I happened to be in Westport a few weeks ago as an independent onlooker, at the time of what is now known there as "the stoning day," and as I see in the local newspapers any amount of garbled statements with reference to it, will you allow me briefly to state the circumstances as I know them to have existed P The lady whose kind act has been the cause of so much trouble, has been a long resident in Westport, and one most kindly and generously disposed towards her poorer neighbours, whether Protestant or Catholic. She arranged her picnic for the eighty-two Sunday-school children on July 14th as quietly as she could—few of the townspeople even knowing of it—as it was to be solely at her own expense. Before they started to Old Head, which was about seven miles off, some toys and sweets were distributed to the children. Among the first were some pocket-handkerchief-flags, intended to mark the course for racing on the shore. Of these, the colours and devices had been taken no account of, no " party " thought having entered into anybody's head. The bundles of sweets were thrown in among them with some observation to the effect that if they shouted as loud this time as they did the last that they were out, they would want something for their throats. I am minute as to these trifles, because it has been so often since stated that the drive was a " procession ;" the flags, "party badges ;" and that the children were "instructed." to shout and "boo" the people along the road. The cheering was loud and long from the let-loose little merry-makers, but it

was for such things as "the blue sea" or " Croaghpatrick," or some friend whose gate they passed for whom they happened to have a particular regard,—but they were neither instructed nor forbidden to shout, except as regarded the silence enjoined as they passed the chapel, lest any one within should be disturbed. But, indeed, the statement of the children's having provoked outrage which was made at the pitiable so-called " trial " that ensued in consequence of the police having arrested a few of the miscreants, is sufficiently refuted by the fact that the infuriated people—in one place over a hundred and twenty, it is said—never appeared from behind the hedges till the return journey, when, of course, fright effectually silenced them. The open vehicles, it is said, were filled up with stones, turf, clods, and manure,—and, in a word, everything offensive that the people could lay their hands upon. The stone which struck Miss Powel as she was stretching out her arms to protect the children beside her, was thought to be about 4 lb. in weight. She became unconscious, and the blood flowed copiously; but her friends scarcely dared to stop a moment to bind up the wound, so continuously did the people, even with this sight before their eyes, hurl stones at them. As to the causes of the assault, none are given, save these pretences which have been mentioned. It seems to have been a simple ebullition of religious bigotry such as we may expect to see in full force if ever, which God forbid, we come under Home-rule. For if these things are done in the green tree, what, indeed, will be done in the dry ? If simple authentic statements of half that goes on in this country—things which people dare not even speak of, who are not prepared to leave it—were really apprehended by the Scotch and English people, surely they would think again before giving us over bound hand and foot to our enemies.