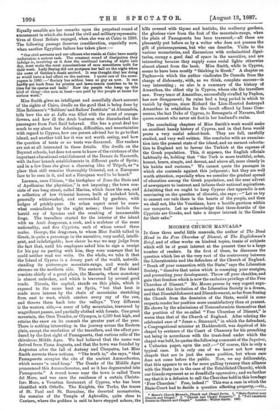 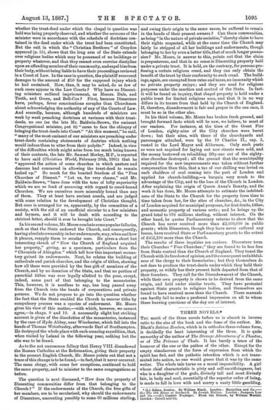 Ix these three useful little manuals, the author of The Dead Hand in the Free Churches of Dissent, of The Etaglislonan's .Brief, and of other works on kindred topics, treats of subjects which will be of great interest at the present time to a large number of readers. In the first of these, he discusses the question which lies at the very root of the controversy between the Liberationists and the defenders of the Church of England. "Break off your connection with the State," says the Liberation Society, "dissolve that union which is cramping your energies, and preventing your development. Throw off your shackles, and gain that freedom which is now the exclusive privilege of the Free Churches of Dissent." Mr. Moore proves by very cogent argu- ments that this invitation of the Liberation Society is a dream, and that Disestablishment and Disendo wment, so far from freeing the Church from the dominion of the State, would in some respects render her position more unsatisfactory than at present. He shows by the admissions of Nonconformists themselves that the position of the so-called " Free Churches of Dissent," is worse than that of the Church of England. After relating the celebrated case of "Jones V. Stannard," in which the defendant, a Congregational minister at Huddersfield, was deprived of his chapel by sentence of the Court of Chancery for his preaching not being in accordance with the trust-deed under which the chapel was held, he quotes the following comment of the Inquirer, a Unitarian paper, upon the suit :—" Of course, this is only a typical case. It is only one of we know not how many chapels that are in just the same position, but whose case does not come before the public. Now, we say deliberately, that this appears to us a far more galling tyranny than alliance with the State (as in the case of the Established Church), which our friends represent as so dreadfully oppressive; and we further say that it is a delusion to call the Churches held in this bondage 'Free Churches.' Free, indeed!" This was a case in which the State-Court had to decide a question affecting property,—viz., • Moores Chunk Manuals. Chnrek and Chapel Saris. 1. "State Control over Much and Chapel." 2. "Church and Chapel Property." 3. "Parlamentary Grant. to Church and Chapel." Louden: Walter Smith. 1887. whether the trust-deed under which the chapel in question was held was being properly observed, and whether the sermons of the minister were in accordance with the schedule of doctrines con- tained in the deed under which the trust had been constituted. But the suit in which the " Christian Brethren" of Croydon appeared (p. 55), shows that the long arm of the State extends over religions bodies which may be possessed of no buildings or property whatever, and that they cannot even exercise discipline upon an offending member of their community, and expel him from their body, without being liable to have their proceedings reviewed in a Court of Law. In the case in question, the plaintiff recovered damages to the amount of £50 for the supposed injury which he had sustained. How, then, it may be asked, do so few of such cases appear in the Law Courts 1, Why have no Dissent- ing ministers suffered imprisonment, as Messrs. Dale, and Tooth, and Green, and Bell-Cox P First, because Dissenters have, perhaps, fewer conscientious scruples than Churchmen about acknowledging the authority of any of the Courts of Law. And secondly, because, although hundreds of ministers are week by week preaching doctrines at variance with their trust- deeds, no one (as the late Mr. Baldwin-Brown, the eminent Congregational minister, put it) "cares to face the obloquy of bringing the trust deeds into Court." "At this moment," he said, "many of the most eminent of our ministers are preaching under trust-deeds containing statements of doctrine which nothing would induce them to utter from their pulpits." Indeed, in view a the difficulties which might arise from too much being known of their contents, the late Mr. Samuel Morley, M.P., is reported to have said (Christian World, February 26th, 1885) that he "approved the action of some churches in which pastors and deacons had concurred in allowing the trust-deed to remain locked up." So much for the boasted freedom of the "Free Churches of Dissent." "Let us, for very shame," said Mr. Baldwin-Brown, "have done with the tone of lofty superiority which we are so fond of assuming with regard to creed-bound Churches. We are ourselves more miserably bound than any of them. They at least have ancient creeds, and are judged with some relation to the development of Christian thought. But ours is arranged for us, apparently, by the committee of a society, with the aid of an unofficial circular to a few ministers and laymen, and it will be dealt with according to the strictest letter, should it ever be brought into Court."

In his second volume, Mr. Moo re combats some popular fallacies, such as that the State endowed the Church, and consequently, having absolute ownership in her endowments, may, when and how it pleases, reapply them to secular uses. He gives a short but interesting sketch of "How the Church of England acquired her property," giving, as a specimen, particulars from the "Chronicle of Abingdon which tell how this important monas- tery gained its endowments. Next, he relates the building of cathedrals and parish churches, and the origin of tithes, showing how all these were provided by the free gift of members of the Church, and by no donation of the State, and that no portion of parochial tithes was ever legally allotted to the poor, except, indeed, some part of that belonging to the monasteries. This, however, it is needless to say, has long passed away from the Church into the hands of corporations and private persons. We do not propose to go into the question whether the fact that the State enabled the Church to recover tithe by compulsory process was a species of endowment. Mr. Moore gives his view of this matter,—with which, however, we cannot agree,—in chaps. 9 and 10. A necessarily slight but striking account is given of the dissolution of the monasteries, instanced by the case of Hyde Abbey, near Winchester, which fell into the hands of Thomas Wriothesley, afterwards Earl of Southampton. He destroyed the whole place with such amazing expedition, that, when visited by Leland in the following year, nothing but the site-was to be found.

As to the not uncommon fallacy that Henry VIII. disendowed the Roman Catholics at the Reformation, giving their property to the present English Church, Mr. Moore points out that not a trace of this change is to be found,—in fact, that it never occurred. The same clergy, with some few exceptions, continued to hold the same property, and to minister to the same congregations as before.

The question is next discussed, "How does the property of Dissenting communities differ from that belonging to the Church " If the endowments of the Church, the free gifts of her members, are to be secularised, why should the endowments of Dissenters, amounting possibly to some 60 millions sterling,

and owing their origin to the same cause, be suffered to remain in the hands of their present owners I, Can these communities, as being "in the nature of private societies," thereby claim to have their rights respected, while at the same time the Church may fairly be stripped of all her buildings and endowments, though belonging to her by even a better title,that of much longer posses- sion P Mr. Moore, in answer to this, points out that the claim is preposterous, and that in no sense is Dissenting property held under a private trust. It is held, on the contrary, for persons pro- fessing a certain religions creed, and they can only obtain the benefit of the trust by their conformity to such creed. The build- ings, again, are exempted from rates and taxes, an immunity which no private property enjoys ; and they are used for religious purposes under the sanction and control of the State. In fact, it will be found on inquiry, that chapel property is held under a public trust for limited religious uses, and that it in no way differs in its tenure from that held by the Church of England. If, therefore, disendownient is fair and proper in the one case, it mast be so in the other also.

In his third volume, Mr. Moore has broken fresh ground, and brought forward facts which will be new, we believe, to most of our readers. For instance, at the time of the Great Fire of London, eighty.nine of the City churches were burnt down ; but their sites, with those of the churchyards and parsonages attached, were by the 19 Charles II., cap. 3, vested in the Lord Mayor and Aldermen. Only such parts as were not required for laying out new streets were sold, and the money bestowed on rebuilding fifty-one out of the eighty- nine churches destroyed ; all the ground that the municipality required for the new improvements was taken without further compensation than this, that a tax of one shilling was levied on each chaldron of coal coming into the port of London and applied for church-building,—a bargain very much to the advantage of the City, and to the loss of the Church in London.

After explaining the origin of Queen Anne's Bounty, and the work it has done, Mr. Moore attempts to estimate the indebted- ness of the State to the Church for the property from time to time taken from her, for the sites of churches, &c., in the City of London acquired for municipal purposes, for first-fruits, tithes, and monastic property of various sorts ; and he brings up the grand total to 978 millions sterling, without interest. On the other hand, he quotes Parliamentary returns to show that the Church has never received more than £2,600,000 in public grants ; while Dissenters, though they have never suffered any losses, have received State or Parliamentary grants to the extent of £452,196 more than the Church.

The results of these inquiries are curious. Dissenters term their Churches "Free Churches ;" they are found to be less free from State control than the Church of England. They taunt the Church with its freedom of opinion, and the consequent unfaithful- ness of the clergy to their formularies ; but they themselves do not dare to produce the trust-deeds under which they hold their property, so widely has their present faith departed from that of their founders. They call for the Disendowment of the Church, while their own property is shown to be derived from the same origin, and held under similar trusts. They have protested against State grants to religions bodies, and themselves are found to have received more than the Church. These manuals can hardly fail to make a profound impression on all to whom these burning questions of the day are of interest.