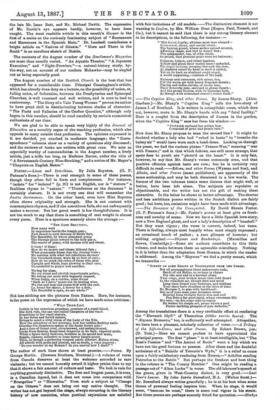 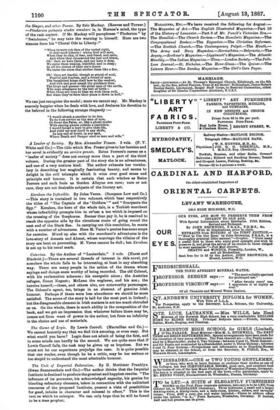 The author of such lines shows at least promise.—Poems. By

George Martin. (Dawson Brothers, Montreal.)—A volume of verse from Canada deserves at least the welcome accorded to rare visitants; but we cannot honestly award it higher praise than to say that it shows a fair amount of culture and taste. We look in vain for anything genuinely distinctive. The first and longest poem, ills true, is a Canadian legend, but it does not come into comparison with " Evangeline " or "Hiawatha.' Even such a subject as "Change on the Ottawa" does not bring out any native thonght. The writer has not got beyond:the- stage, always occurring in the literary history of new countries, when poetical aspirations are satisfied

with fair imitations of old models.—The distinotive element is not wanting in Ceylon, by Mrs. William Dent (Kagan Peal, Trench, and Co.), Mit it cannot be said that there is any strong literary element in its descriptions, iwthe following, for instance :— " forest-depths, all trees most rare abound-

Satin.wood, ebony, and sandal sweet; The banyan grand, whom arches spread .oand. Affording abode, sad rest to weary foot; The eidamender, toe. of silky she., So prised, that preeious gems were set between ; Palmyra, &Egad, and tubed bamboo, Yellowand green their varied leases unfurled. The timid tortoise, creeping through the dew, At slightest sound its head in shell is marled, Yet on its back an elephant could stand. A world simporting,—emblem of the land.

Nutmegs and oinnamon, rich spices, too, Fill the warm air with heavy fragrant breath ; The tea and coff.shrubs, of snowy hue, Their flowerets pale, enclosed in glessysheath And the proud be-tr., with its blossoms lush, As though with oris.oned sunset's stolen flush."

—The Captive King, and other Poems. By James Sharp. (Alex. Gardner.)--Mr. Sharp's "Captive King" tells the love-story of James I. of Scotland. It is written in octooyllabic verse, which does not, however, move in Mr. Sharp's hands with any "fatal facility." Here is a couplet from the, description of Joanna in the garden, when the "Captive King." sees her from his window

How does Mr. Sharp propose to scan the second line It might be doubted whether a lady who had "robed in baste" to "breathe the balmy air" would have worn such a head-dress. Looking on through the poem, we find the carious phrase "Franco-War," meaning "war with France ;" and in that which follows, one still more strange, that spots dear to youth are " photo'd on the heart." It is only fair, however, to say that Mr. Sharp's verses commonly scan, and that positive offences againet taste are rare; but he is certainly very difficult to read.—Edissa, atul other Poems (Wyman and Son), and Alboin, and other Poems (same publishers), are apparently of the same authorship, and may be both dismissed in a few words. The former of the two volumes treats some themes that might well, or better, have been left alone. The sabjects are repulsive or objectionable, and the writer has not the gift of making them attractive. In the latter he shows to better advantage. The shorter and less ambitious poems written in the Scotch dialect are fairly good ; but here, too, omissions might have been made with advantage. —The Romance of the Unexpected. By David Streets Foster. (G. P. Pittnam'a Sons.)—Mr. Foster's poems at least give us fresh- ness and novelty of scene. Now we have a little Spanish love-story, now a New England ghost, and now a lady's description of "baseball." But they want 'rigour; the verse is correct, indeed, but tame. There is feeling, always most happily when most simply expressed ; an occasional touch of pathos; a rare glimpse of humour; but nothing original.—Rhymes and Renderings. (Macmillan and Bowes, Cambridge.)—Some six authors contribute to this little volume, and make between them an agreeable miscellany. Nothing in it is better than the adaptation from Horace, in which the reader is addressed. Among the "Rhymes" we find a pretty sonnet, which we transcribe " &MST ON SOK. ESSAYS AT THABSLATION FRAM TES GRELII.

Not all presumptuous these endeavoring rude, Bards of old Hellos, to re-toss in rhyme For idle ears and in a harsher slime

Your songs, year broken mimic that cloth brood In the reluctant air, though field and wood Long since forgot your f.tatepa, and sublime Your sines burn steadfast lathe skiea of time. No Maxey. /, to pipe with hardihood,

But as of yore min poor Arcadian .wain Hearing from twihght forest dim and cool Pan flutes far goodnight, whose sweetness fills His eare,--on fire some echo to regain

He wastes his simple art, prone where a pool Paints darkling glimpses of pale daffodils."

Among the translations there is a very creditable effort at rendering the "Eleventh Idyll" of Theocritus (Mir worrbr einem). The "Miriam Memento," too, is sufficiently well attempted. Altogether, we have here a pleasant, scholarly collection of verse.—AL Trilogy of the Lifo-to•Come, and other Poems. By Robert Brown, Jon; (D. Nutt.)—Here we cannot profess to have appreciated the principal poems. The first " phase " is at least intelligible, but "The Rose's Passion" and "The Ascent of Souls" want a key whioh we have not the good fortune to possess. After these and the doubtful archaisms of a " Balaide of Treaurie's Wyfe," it is a relief to come upon a fairly satisfactory rendering from Homer,—" Achilles sending Patroclus to the Battle." Bat perhaps the freshest and best thing in the volume is "The County Member." One might be reading a passage out of "Alton Locke" in verse. Tbeoldlabourer'sspeeohat the grave, given in West-Country dialect, is very good.—East Year's Leaves. By John Jervis Beresford, M.A. (Walter Scott.)— Mr. Beresford always writes gracefully ; he in at his beet when some theme of personal feeling inspires him. When he sings, it would seem, "because he must," there is some real vigour in his strain. But these poems are perhaps scarcely fitted for quotation.—Gladys the Singer, and other Poems. By Eric Mackay. (Reeves and Turner.) —Pindarum guisguis studet cemulari is, in Horaoe'e mind, the type of the rash aspirer. If Mr. Mackay will paraphrase " Pinder= " by " Swinbnn;e," he may take the warning to himself. Here are two stanzas from his "Choral Ode to Liberty

"When tyrants rob thee of thy vested right, 0 clear-eyed Liberty I whom God will save, When they do this, in fear, and fraud, and spite. And when they I:Amu:event the just and brave, ! then we hate them, and our hate is deep. We curse them waking, watchful, and in deep; In all the circuit of their sites desire We aurae the curse that clothes them like a fire.

Oh ! thou art fearful, though no grand of soul, Fearful and fearless, and a friend of men. The haughtiest king. shall bow to thy control, And rich and poor accept thy guidance then. The hinge and queens--the great ones of the earth, Who urge allegiance by the test of birth— When these are true to thee we wish them well, But when they're false their place is down in hell."

We can just recognise the model; more we cannot say. Mr. Mackay is scarcely happier when he deals with love, and declares his devotion to the beloved in the following strange rhapsody I would attack a panther in it, den, To do thee service as thy man of men. Or front the Fates, or, like a ghoul confer With staring ghosts outside a sepulchre. I would forego a limb to giro thee life. And yield My soul itself in any strife. In any cod of doubt, in any .pot, Where Death and Danger meet as man and wife."