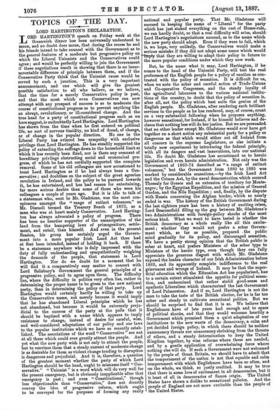 T ORD HARTINGTON'S speech on Friday week at the

Greenwich dinner has been universally understood to mean, and no doubt does mean, that during the recess he and his friends intend to take counsel with the Government as to the general features of a moderate but progressive policy on which the Liberal Unionists and the Conservatives could agree ; and would be perfectly willing to join the Government if these negotiations result in showing that there is no insur- mountable difference of principle between them, and if the Conservative Party think that the Unionist cause would be served by such a junction. This is a very important announcement, and one which will give the greatest possible satisfaction to all who believe, as we believe, that the time for a merely Conservative policy is past, and that the most which even Conservatives can now attempt with any prospect of success is so to moderate the course of constitutional progress as to prevent anything like an abrupt, revolutionary, or ill-considered change. And the true head for a party of constitutional progress such as we here suggest, is undoubtedly Lord Harlington. Lord Hartington has shown from the time when he first entered on political life, no sort of nervous timidity, no kind of dread, of change, or of change in the popular direction. No one in the Liberal Party has evinced less sympathy with exclusive privilege than Lord Harlington. He has steadily supported the policy of extending the suffrage down to the household limit at which it has recently been fixed, nor is there any remnant of hereditary privilege obstructing social and economical pro- gress, of which he has not cordially supported the complete removal. Some of his old colleagues are now accustomed to treat Lord Hartington as if he had always been a Con- servative; and doubtless on the subject of the great agrarian revolution in Ireland, and the policy to be pursued towards it, he has entertained, and has had reason for entertaining, far more serious doubts than some of those who were his colleagues a couple of years ago. But it is idle to talk of a statesman who, next to Mr. Gladstone, was the most con- spicuous amongst the " range of extinct volcanoes," as Mr. Disraeli termed the Treasury Bench of 1873, as a man who was at heart mainly Conservative. Lord Harting- ton has always advocated a policy of progress. There has been no heartier supporter of the emancipation of the land from the hampering laws of primogeniture, settle- ment, and entail, than himself. And even in the present Session, his group has certainly urged the Govern- ment into a more popular Irish Land Act than had at first been intended, instead of holding it back. If there be a statesman anywhere who is duly impressed with the duty of fully understanding and sympathetically weighing the demands of the people, that statesman is Lord Harlington. Nor do we doubt for a moment that he will find it a comparatively easy matter to concert with Lord Salisbury's Government the general principles of a progressive policy, and to agree upon them. The difficulty lies, where the difficulty in politics very often lies, rather in determining the proper name to be given to the new national party, than in determining the policy of that party. Lord Harlington would certainly hardly be willing to take up the Conservative name, not merely because it would imply that he has abandoned Liberal principles which he has not abandoned, but because it would be extremely preju- dicial to the success of the party at the polls that it should be baptised with a name which appears to imply resistance to change, instead of desire for careful, wise, and well-considered adaptations of our policy and our laws to the popular institutions which we have so recently estab- lished. The associations of the word " Conservative " are not at all those which could ever greatly attract the people. And yet what the new party wish is not only to attract the people, but to convince them that a steady current of moderate change is as desirable for them as violent change tending to disruption is dangerous and prejudicial. And it is, therefore, a question of the greatest moment whether the party of which Lord Harlington should be the head, ought to misname itself "Con- servative." " Unionist " is a word which will do very well for the present emergency, but is obviously inapplicable after that emergency is past ; and even "Constitutional," though less objectionable than "Conservative," does not directly convey the idea of progressive reform, which ought to be conveyed for the purposes of forming any really

national and popular party. That Mr. Gladstone will succeed in keeping the name of " Liberal " for the party which has just staked everything on the cast of Rome-rule,. we can hardly doubt, so that a real difficulty will arise, should, Lord Hartington's negotiations succeed, as to the name which the new party should adopt. Even if they were to fail, which is, we hope, very unlikely, the Conservatives would make a serious mistake if they did not adopt some name which would

that they are willing to adapt their policy in future to the more popular conditions under which they now work.

Bat, be the name what it may, Lord Harlington, if he, comes to the head of the Unionist Party, will test the real preference of the English people for a policy of caution as con- trasted with the policy of sensation. It is difficult for us, when we note the sober and careful action of Trade-Unions and Co-operative Congresses, and the steady loyalty of the agricultural labourers to the various national institu- tions of the country, to doubt that the policy of sensation is, after all, not the policy which best suits the genius of the English people. Mr. Gladstone, after rendering such brilliant services to the people as he has rendered, may, of course, count on a very substantial following when he proposes anything, however sensational, for Ireland, if he himself believes and de- clares that nothing less will do her justice. But we are persuaded that no other leader except Mr. Gladstone would ever have got together on a short notice any substantial party for a policy so dangerous as that which would either cut off Ireland from all concern in the supreme Legislature, or else initiate a totally new experiment by introducing the federal principle, with all its dangers and vast innovations, into our national life. No doubt Mr. Gladstone has accustomed us to heroin legislation and even heroic administration. Not only was the Government of 1869-74 described as "a range of extinct volcanoes," but the Government from 1880 to 1885 was marked by considerable sensations,—by the Irish Land Act and the Crimes Act, by the naval demonstration which secured Thessaly for Greece and an extension of territory for Monte- negro; by the Egyptian Expedition, and the mission of Genera/ Gordon, and the Nile Expedition ; and, finally, by the dispute with Russia concerning the Afghan border, which so nearly ended in war. The history of the British Government during the last eighteen years has been a history of exciting crises, Lord Beaconsfield filling up the gap between Mr. Gladstone's two Administrations with foreign-policy shocks of the most serious kind. What we want to have tested is whether the British democracy as a whole really like all this excite- ment; whether they would not prefer a sober Govern- ment which, so far as possible, prepared the public mind gradually for its policy, and discouraged sensation. We have a pretty strong opinion that the British public is sober at heart, and prefers Ministers of the sober type to Ministers of the heroic type, even though they can fully appreciate the generous disgust with which Mr. Gladstone exposed the leaden character of our Irish Administration before 1869, and its apparently complete indifference to the real grievances and wrongs of Ireland. It may be that the super- ficial education which the Education Act has popularised, has to a certain extent stimulated the appetite for political sensa- tion, and undermined that rather stolid good-sense and apathetic Liberalism which characterised the last Government of Lord Palmerston. And if so, Lord Harlington is not the man to take the taste of the British elector, for he is far too sober and steady to cultivate sensational politics. But we should be surprised to find that it is so. We believe that Englishmen have of late years had enough and to spare of political shocks, and that they would welcome heartily a Government which promised them a quiet adaptation of our institutions to the new wants of the democracy, a calm and yet decided foreign policy, in which there should be neither unnecessary threats nor unnecessary shrinking from the threats of others, and a steady determination to keep the United Kingdom together, by wise reforms where these are needed, and by a gentle application of overwhelming force where nothing else will do. If such a Government were not welcomed by the people of Great Britain, we should have to admit that the temperament of the nation is not that equable and calm temperament with which Englishmen have been so often, and on the whole, we think, so justly credited. It may be true that there is some love of excitement in all democracies, but it is least of all in democracies of Saxon origin. The United States have shown a dislike to sensational policies. And the people of England are not more excitable than the people of the United States.