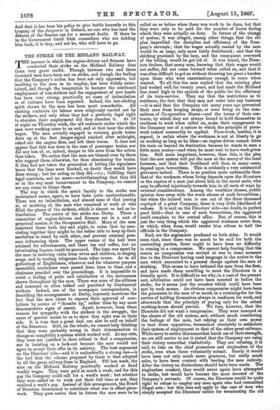 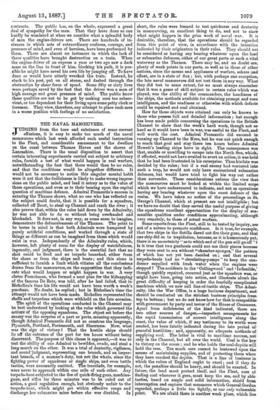 THE STRIKE ON THE MIDLA.ND RAILWAY.

THE manner in which the engine-drivers and firemen have conducted their strike on the Midland Railway does them very great credit. Though between two and three thousand men have been out on strike, and though the feeling that the Company's action has been not only oppressive, but insulting to the men in its employ, has been widely enter- tained, and though the temptation to hamper the continued employment of non-strikers and the engagement of new hands has been very strong, practically no cases of intimidation or of violence have been reported. Indeed, the law-abiding spirit shown by the men has been most remarkable. All existing contracts for labour were religiously carried out by the strikers, and only when they had a perfectly legal right to abandon their employment did they abandon it. At 12 at night on Thursday week, the old contracts under which the men were working came to an end, and at that hour the strike began. The men actually engaged in running goods trains drew up at the first danger-signal reached after midnight, raked out the engine fires, and left their trains. It does not appear that this was done in the case of passenger trains, nor did any loss, of, or, indeed, danger to life arise from the action thus taken. We notice that the men are blamed even by those who support them otherwise, for thus abandoning the trains.

they had Ilot taken the precaution of letting the signalmen know that the lines were blocked, no doubt they would have done wrong; but for acting as they fulfilling their legal contracts, and no more—notwithstanding that they did so in the way most inconvenient to the Company, we cannot see any cause to blame them.

The way in which the men'S loyalty to the strike was maintained seems, again, to have been quite unobjectionable. There was no intimidation, and almost none of that jeering at, or mobbing of, the men who remained at work or who filled the places of the strikers, which is almost as bad as in- timidation. The centre of the strike was Derby. There a committee of engine-drivers and firemen sat in a sort of perpetual session at the Co-operative Hall. Many of the men remained there both day and night, in order that by asso- ciating together they might be the better able to keep up their resolution to stand by each other, and prevent external pres- sure influencing them. The upper rooms of the hall were retained for refreshments, and there tea and coffee, but no intoxicating liquors, could be procured. The time was spent by the men in receiving visits from wives and children, in singing songs, and in reading telegrams from other towns. As in all gatherings of Englishmen, wherever and for whatever purpose assembled, resolutions were passed from time to time, and a chairman presided over the proceedings. It is impossible to resist a feeling of pride and satisfaction at the seriousness shown throughout by the men. There was none of the silliness and nonsense so often talked and practised by Continental strikers. Indeed, one of the newspaper correspondents, in describing the arrangements at Derby, expressly mentions the fact that the men chose to express their approval of reso- lutions by means of "thumbs up," rather than by any more demonstrative signs of assent. Apart, however, from these reasons for sympathy with the strikers in the struggle, the cause of quarrel seems to us to show that right was on their side. It is true that a great deal can also be said on behalf of the Directors. Still, on the whole, we cannot help thinking that they were probably wrong in their determination to change so completely a system which worked well. At any rate, they were not justified in their refusal to find a compromise, nor in insisting on a lock-out because the men would not agree to accept their offer in its entirety. The best argument on the Directors' side—and it is undoubtedly a strong one—is the fact that the scheme proposed by them is that adopted by all the great railway-lines in England. Pill last week, the men on the Midland Railway practically worked at fixed weekly wages. They were paid so much a week, and for this pay the Company could call for a week's work ; but whether they were called on to work out their full time or not, they received a_week's pay. Instead of this arrangement, the Board of Directors determined to substitute what was in effect piece-

work. They gave notice that in future the men were to be simply accepted the Directors notice for terminating the old

called on as before when there was work to be done, but that they were only to be paid for the number of hours during which they were actually on duty. In favour of the change of system, it was alleged, among other things, that the old plan imperilled the discipline and efficiency of the Com- pany's servants ; that the wages actually earned by the men would be as large, only more fairly distributed; and that the shirking practised by the lazy, and the consequent overwork of the willing, would be got rid of. It was found, the Direc- tors declare, that many men, knowing that their wages would not suffer, did not come forward when called on, and that it was often difficult to get on without throwing too great a burden upon those who were conscientious enough to come when wanted. To all this the men replied that the existing plan had worked well for twenty years, and had made the Midland line stand high in the opinion of the public for the efficiency of its train-service. They say that the restrictions as to residence, the fact that they may not enter into any business —it is said that the Company not many years ago prevented their men from keeping shops, or even being on the com- mittees of Co-operative Stores—and the terms of their con- tracts, by which they are always bound to hold themselves in readiness to work when called on, make their engagement to the Company one of a nature to whioh the principle of piece- work cannot reasonably be applied. Piece-work, besides, it is argued, is unfair where the workman is not at liberty to go on working as long as be likes—an engine-driver cannot drive his train on beyond its destination because he wants to earn a little more money—and when he must wait to have work given him. Still more important, however, than this, is the plea that the new system will put the men at the mercy of the local foremen, and that their livelihood will thus, in many cases, depend upon favouritism. This is evidently a very substantial grievance indeed. There is no position more unbearable than that of the workman whose living depends upon the ill-nature or the caprice of a man just above him in the social scale, who may be affected injuriously towards him in all sorts of ways by external considerations. Among the wealthier classes, public opinion does away with the worst abuses of such favouritism ; but when the injured man is one out of the three thousand employe's of a great Company, there is very little likelihood of redress. It is said on the Directors' side—no doubt, in perfect good faith—that in case of such favouritism, the aggrieved could complain to the central office. But, of course, this is just the very thing which the aggrieved workman never does, or which, when done, would render him odious to half the officials in the Company.

Such are the arguments produced on both sides., It would seem that, since there was so much to be said for both the contending parties, there ought to have been no difficulty in coming to a compromise. We cannot help fearing that the reason no compromise was arrived at was in some measure due to the Directors having used language in the notice to the men which amounted to a general charge against the men of shirking. This seems to have irritated the men from the first, and have made them unwilling to meet the Directors in a friendly spirit. It is difficult to see why, in a case of the present sort, arbitration could not have been resorted to before the strike, for it seems just the occasion which could have been met by such means. An obvious compromise might have been the guarantee to the men of so much as a retaining-fee for the service of holding themselves always in readiness for work, and afterwards that the principle of paying only for the actual working-hours should prevail. We fear, however, that the Directors did not want a compromise. They were annoyed at the abuses of the old system, and, without much considering the feelings of the men, but relying on their own power to beat down opposition, determined absolutely to assimilate their system of employment to that of the other great railways. While sorry to notice this somewhat harsh use of their strength, we are still sorrier to see it stated that the Company are using their victory somewhat vindictively. They are refusing, it is said, to take on the chief promoters and ringleaders of the strike, even when these voluntarily submit. Surely it would have been not only much more generous, but really much safer, to have been content with beating the men entirely. After the victory no distinctions should have been made. The ringleaders crushed, they would never again have attempted to strike, but would have become the most devoted of the Company's servants. Of course, the Directors would be quite right to refuse to employ any man again who had committed illegal acts ; but this does not apply to the case of men who

work. They gave notice that in future the men were to be simply accepted the Directors notice for terminating the old entracte. The public has, on the whole, expressed a great deal of sympathy for the men. That they have done so can hardly be wondered at when we consider what a splendid body of men the engine-drivers are. There are hundreds of in- stances in which acts of extraordinary coolness, courage, and presence of mind, and even of heroism, have been performed by them. There are almost no instances in which the leek of these qualities have brought destruction on a train. When the engine-driver of an express a year or two ago saw a dark mass on the line in front of him, blocking his path, it is pos- sible he might have saved his own life by jumping off. To have done so would have utterly wrecked the train. Instead, he stuck to his post, put on all steam, and dashed through the obstruction by sheer force of speed. Some fifty or sixty lives were perhaps saved by the fact that the driver was a man of high courage and great presence of mind. The public know these qualities are not to be got by making men too scissor- 'dent, or too dependent for their living upon some petty clerk or foreman. They view, therefore, any attempt to place such men in a worse position with feelings of no satisfaction.