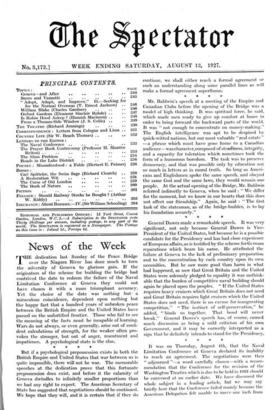 Page 1, 13 August 1927 — But if a psychological prepossession exists in both the British
Close

But if a psychological prepossession exists in both the British

Empire and United States that war between us is quite impossible, there will not be war. The memorable speeches at the dedication prove that this fortunate prepossession does exist, and before it the calamity of Geneva dwindles to infinitely smaller proportions than we had any right to expect. The American Secretary of State has suggested that negotiations should be continued. We hope that -they will, and it is certain that if they do continue, we shall either reach a formal agreement or such an understanding along some parallel lines as will make a formal agreement superfluous.