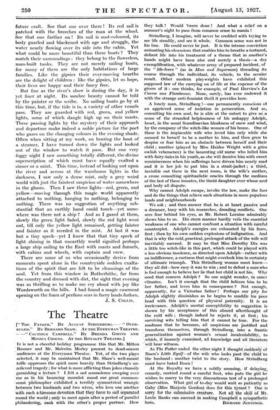 t" THE FATHER." BY AUGUST STRINDBERG.--" OVER- RULED." BY BERNARD SHAW. AT THE EVERYMAN THEATRE.

- " CAUTIOUS CAMPBELL." BY BRENDA GIRVIN AND MONICA COSENS. AT THE ROYALTY THEATRE.] TT is not a cheerful holiday programme this that Mr. Milton Rosnier and Mr. Malcolm MOrley present . to -dead-season !andienes at the Everyman Theatre. Yet, of the two Offs selected, it may_ be maintained that Mr. Shaw's well-meant trifle oppresses the spirit more heavily than Strindberg's un- relieved tragedy; for what is more afflicting than jokes clumsily garnishing a lecture ?. I felt a sad somnolence creeping over ine asin his bonncing moralist- mood our great common- sense 'philosopher eihibiteda terribly, ..syrnmetrical wrangle between two hus6ands and-two wives, who love one another with such a tiresome deimfion that they have to sail separated round the world ; only to meet again after a period of parallel philandering; each- with the other's proper partner. How

they talk ! Would 'twere done .!, And what a relief on a summer's night to pass from common sense to mania !

Strindberg, I imagine, will never be credited with trying to see life steadily, and see it whole. Common sense was not in his line. He could never be just. It is the intense conviction animating his obsessions that enables him to breathe a tortured, defiant life into his treatment of a theme that in another's hands might have been also and merely a thesis—a dry exemplification, with whatever array of prepared incident, of the " life-force " (as in Man and Superman) threading- its course through the individual, its vehicle, to the secular result. Other modern playwrights have exhibited this supposed law of the carrying on of life at the expense of the givers of it : one thinks, for example, of Paul Hervieu's La Course aux Flambeaux. None, surely, has- ever endowed it with the strange anti-feminist thrill it provides here.

A lonely man, Strindberg !—one permanently conscious of an aggrieved sense of isolation in persecution. And so, consulting his own soul; he is able at the outset to give ua a sense of the stranded helplessness of his unhappy Adolph, beset, in the usual Scandinavian bleakness of snow and wind, by the company of the witch-like women of his house. One of these is the implacable wife who loved him only while she seemed to herself to be a mother to him, and then greW to despise or fear him as an obstacle between herself and their child ; another (played by Miss Haidee Wright with a grim owlish vehemence) is the lamenting old' nurse who lulled him with fairy-tales in his youth, as she will deeeiVe him with sweet reminiscences when his sufferings have driven him nearly mad and it is her job to put him in a strait:jacket ; a third, invisible out there in the next room, is the Wife's mother, a crone consulting spiritualistic oracles through the medium of the last of these inmates, the timid daughter over Whose soul and bodY all dispute.

Why cannot Adolph escape, invoke the law, Make the 'fuss and do the things that relieve such situations in more populous -lands and neighbourhoods

We ask ; and then answer that he is at heart passive and a dreamer, busy with his researches, dreading conflicts. One sees fear behind his eyes, as Mr. Robert Loraine admirably shows him to us. HiS stern manner hardly veili the essential 'weakness of one who cannot confront a situation with Careful counterplot. Adolph's energies are exhausted by his fears, first ; then by his own sudden explosions of indignation. And that is why the cold, practical, prolonged attack of the wife will inevitably succeed.- It may be that Miss Dorothy Dix was a little too witch-like in this pari, which could be played with a less obvious insolence, as directed upon Adolph—rather with an indifference, a curtness that might overlook him in certainty of ultimate triumph. This Strindberg woman must know— they all did—how easy it was to win ; and to defeat a man who is fool enough to believe her lie that her child is not his. 'Why need that concern Adolph ? So one might wonder, in saner climates. Isn't it enough that the Child believes him to be her father, and loves him in consequence ? Not enough, apparently, for a Victorian father ! Perhaps our pity .for Adolph slightly diminishes as he begins to' muddle his poor head with this question of physical paternitY: It is an irrelevance. Adolph's mortal susceptibility to suggestion is shown by his . acceptance of this absurd afterthought of the cold wife ; though indeed he rejects it, at first ; his surviving wits telling him that it cannot he- true. 'For the madman that he becomes,' all suspicions are justified and transform themselves, through Strindberg, into a frantic generalization against woman's sexual incalculability;: to `,which, if insanely examined, all knowledge and all literature "will bear witness.

AS The Father ended the Other night I _thought suddefilk of Ibsen's Little Eyolf—of the wife who looks past the child to < . .• the "child

the husband : another twist to the story. Ho w Strindberg -must have hated Ibsen i „

At the Royalty we haVe a mildly amusing, if delaying, comedy, centred round a careful Scot, who putS the girl he wishes to marry to the very discourteous test, of a prolonged observation. What girl of to-day would wait so patiently as Gaby (Miss Marjorie Gordon) -does Or this tYrant.? One is sorry for the' submissive creature. Not all 'the' skill of Mr. Leslie Banks can succeed in making Ciunaplieli a JENNINGS.