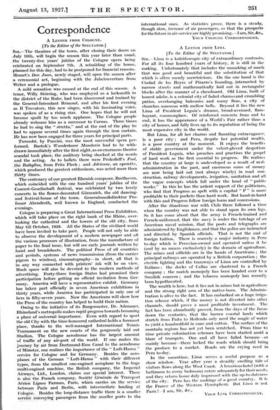 A LETTER FROM COLOGNE. [To the Editor of the SPECTATOR.] SIR,—The theatres of the town, after closing their doors on . July 10th, will begin the season this year later than usual, .the twenty-five years' jubilee of the Cologne opera being

celebrated on September 7th. A rebuilding of the house, planned for this day, had to.be postponed for financial reasons. Mozart's Don Juan, newly staged, will open the season after a ceremonial act, beginning with the Jubelouverture from Weber and a prologue.

A mild sensation was caused at the end of this season. A :tenor, Willy Stoning, who was employed as a locksmith in the district of the Ruhr, had been discovered and trained by . the General-Intendant Remond, and after his first evening as Il Trovatore, this new singer, with his fascinating voice, was spoken of as a rising star. One hopes that he will not become spoilt by too much applause. The Cologne people already welcome him as a successor to Caruso. Three times he had to sing the " stretta," and at the end of the play he had to appear several times again through the iron curtain. He has now been engaged for three years for principal parts.

Turandot, by Puccini, was the most successful opera per- formed. Bartok's Wunderbarer Mandarin had to be with- drawn immediately after the first night, as an enormous theatre scandal took place, the auditory being shocked at the words and the acting. As to ballets there were Prokofieff's Fool, the Bathyllus, from Fritz Fleck ; and Adrienne, an operette, _which produced the greatest enthusiasm, was acted more than _thirty times.

The centenary of our greatest Rhenish composer, Beethoven, which coincided with the one hundred years' jubilee of the Concert-Gesellschaft festival, was celebrated by two lovely concerts in the flower-decorated Giirzenich, the old dancing- and festival-house of the town. Generalmusikdirektor Pro- fessor Abendroth, well known in England, conducted the evenings.

Cologne is preparing a Great International Press Exhibition, which will take place on the right bank of the Rhine, over- looking the cathedral and the towers of the old city, from May till October, 1928. All the States of the civilized world have been invited to take part. People will not only be able to observe the development of a modern newspaper and all the various processes of illustration, from the manufacture of paper to the final issue, but will see early journals written by hand and broadsheets. The political Press of all countries and periods, systems of news transmission (from the carrier pigeon to wireless), cinematography—in short, all that is in any way connected with printers' ink will be on view. Much space will also be devoted to the modern methods of advertising. Forty-three foreign States had promised their participation before getting an official invitation from Ger- many. America will have a representative exhibit. Germany has taken part officially in seven American exhibitions in thirty years, while America has participated in only one of hers in fifty-seven years. Now the Americans will show how the Press of the country has helped to build their nation. Owing to the initiative of its Burgomaster, Dr. Adenauer, Rhineland's metropolis makes rapid progress towards becoming a place of universal importance. Even with regard to sport the old City with the time-honoured cathedral holds a foremost place, thanks to the well-managed International Tennis Tournament on the new courts of the gorgeously laid out Stadion. The Cologne aerodrome has the largest amount of traffic of any air-port of the world. If one makes the journey by air from Dortmund-Ems Canal to the aerodrome of Miinster, one realizes the importance of the " Luft-Hansa " service for Cologne and for Germany. Besides the aero- planes of the German " Luft-Hansa " with their different types, from the smallest one-engined aeroplane to the huge multi-engined machine, the British company, the Imperial Airways, Ltd., London, claims our special interest. There is also the French company, Societe Generale de Transport Aerien Lignes Farman, Paris, which carries on the service between Paris and Berlin, with intermediate landing at Cologne. Besides the long-distance traffic there is a smaller service conveying passengers from the smaller ports to the international ones. As statistics prove, there is a steady, though slow, increase of air passengers, so that the prospects for the future in air-service are highly promising.—I am, Sir, &C.. YOUR COLOGNE CORRESPONDENT.