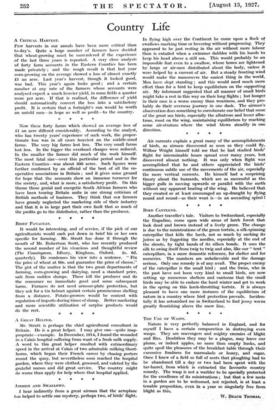 FEW harvests in our annals have been more critical than to-day's. Quite a large number of farmers have decided that wheat-growing must be surrendered if the experience . of the last three years is repeated. A very close analysis of forty farm accounts in the Eastern Counties has been made privately ; and the rough result is that last year corn-growing on the average showed a loss of almost exactly £1 an acre. Last year's harvest, though it looked good, was bad. This year's again looks good ; and a certain number at any rate of the farmers whose accounts were analysed expect a much heavier yield, in some fields a quarter more per acre. If that is realized, the difference of yield should automatically convert the loss into a satisfactory profit. It is certain that a fortnight's sun would be worth an untold sum—in hope as well as profit—to the country.