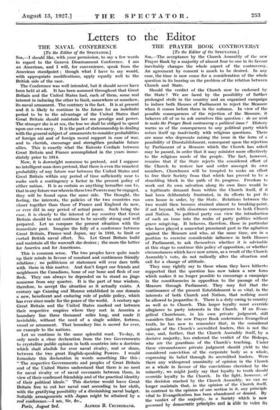 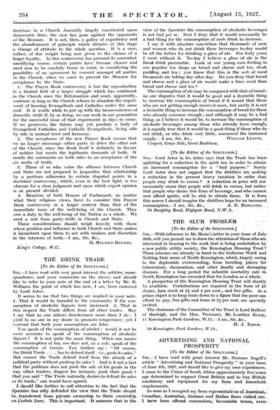 TIIE PRAYER BOOK CONTROVERSY [To the Editor of the SPECTATOR.]

Sin,—The acceptance by the Church Assembly of the new Prayer Book by a majority of almost four to one in its favour inevitably changes the whole aspect of the controversy. An agreement by consent is much to be desired. In any case, the time is now come for a consideration of the whole question in its bearing on the problem of the relation between Church and State.

Should the verdict of the Church now be endorsed by the State ? We are faced by the possibility of further prolonged strife in the country and an organized campaign to induce both Houses of Parliament to reject the Measure when it comes before them in the autumn. In view of the possible consequences of the rejection of the Measure, it behoves all of us to ask ourselves this question : do we wish to make the Prayer Book controversy a political issue ? History warns us of the consequences to any political party which mixes itself up inadvisedly with religious questions. There are some who deprecate raising the issue in the form of a possibility of Disestablishment, consequent upon the rejection by Parliament of a Measure which the Church has asked may be passed, in order that it may minister more effectively to the religious needs of the people. The fact, however, remains that if the State rejects the considered effort of the Church to restore law and order amongst its own members, Churchmen will be tempted to make an effort to free their Society from that which has proved to be a stumbling block in the path of its progress. Freedom to work out its own salvation along its own lines would be a legitimate demand from within the Church itself, if it had been deliberately frustrated, in its efforts to put its own house in order, by the State. Relations between the two would then become strained almost to breaking-point, if not beyond, with disastrous consequences to both Church and Nation. No political party can view the introduction of such an issue into the realm of party politics without grave misgiving. It behoves, therefore, those in particular who have played a somewhat prominent part in the agitation against the Measure and who, at the same time, are in a position to exercise considerable influence in both Houses of Parliament, to ask themselves whether it is advisable at this stage to continue this policy of opposition, or whether circumstances which have now arisen, as a result of the Church Assembly's vote, do not radically alter the situation and call for a change of attitude.

They may rightly say to those whom they have hitherto supported that the question has now taken a new form which makes it no longer possible to encourage a campaign in the constituencies in opposition to the passage of the Measure through Parliament. They may feel that the continuance of the present Establishment is so vital, in the interests of both Church and Nation, that nothing must be allowed to jeopardize it. There is a duty owing to country as well as to Church. This larger loyalty must override allegiance to party interests in the Church. If an Evan- gelical Churchman, in his own private judgment, still considers that the new Prayer Book undermines Evangelical truth, he has now to remember that, in the considered opinion of the Church's accredited leaders, this is not the case, and, further, that the Church Assembly itself, by a decisive majority, has endorsed the verdict of the Bishops, who are the guardians of the Church's teaching. Under these circumstances private judgment should yield to the considered conviction of the corporate body as a whole, expressing its belief through its accredited leaders. Were there any widespread unanimity of opinion in the Church as a whole in favour of the convictions cherished by the minority, we might justly say that loyalty to truth should override loyalty to the Church. In the light, however, of the decision reached by the Church Assembly, we can no longer maintain that, in the opinion of the Church itself,

in contrast to the opinion of one section in it, any principle vital to Evangelicalism has been abandoned or denied. By the verdict of the majority, in a Society which is now governed by democratic principles and bi able to voice its

decisions in a Church Assembly largely constituted upon democratic lines, the case has gone against the opponents of the Measure. It is not, then, a policy. of expediency and the abandonment of principle which dictates at this stage a change of attitude to the whole question. It is a case, rather, of due weight being now given to the claims of a larger loyalty. As this controversy has pursued its somewhat unedifying course, certain points have become clearer and need now to be carefully borne in mind, in considering the possibility of an agreement by consent amongst all parties in the Church, when we come to present the Measure for acceptance by the State.

1. The Prayer Book controversy is but the reproduction in a limited field of a larger struggle which has continued in the Church since the Reformation and must, apparently, continue so long as the Church refuses to abandon the experi- ment of housing Evangelicals and Catholics under the same roof.. It is worth while to put up with the inconveniences of domestic strife if, by so doing, we can work in our generation for the successful issue of that experiment in days to come. If . we persevere, the future may yet produce a body . of Evangelical Catholics and Catholic Evangelicals, living side by side in mutual trust, and harmony.

2. The acceptance of the new Prayer Book means that we no longer encourage either party to drive the other out of the Church, since the Book itself is definitely in favour of neither but meets the legitimate demands of both. It recalls .the extremists on both sides to an acceptance of the via media of truth.

3. Those of us who value the alliance between Church and State are not prepared to jeopardize that relationship by a partisan adherence to certain disputed points in a doctrinal controversy, which, even in the best light, is too obscure for a clear judgment and upon which expert opinion is at present. divided.

4.. Members of both Houses of Parliament, no matter , what. their religious views, have to consider this Prayer Book controversy in a larger context than that of the immediate issue of the well-being of the Church. They owe a. duty to the .well-being of the Nation as a whole. We," need a rest from party strife in Church and State.

These considerations should. weigh heavily with those . whose. position and influence in both Church and State makes it incumbent upon them .to act with wisdom and discretion -. in the interests of both.,1 am, Sir, &c., . • King's College, W.C.