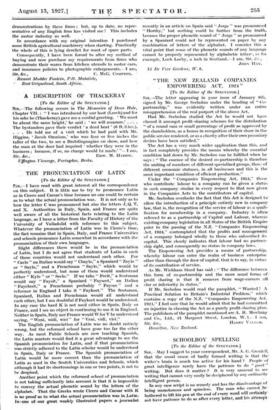 THE PRONUNCIATION OF LATIN

[To the Editor of the SPECTATOR.] SIR,—I have read with great interest all the correspondence on this subject. It is little use to try to pronounce Latin as in Cicero and Caesar's time because no one could be certain' as to what the actual pronunciation was. It is not only as to how the letter C was pronounced but also the letters J, Q, T, and X. Authorities in Italy, Spain, and France are quite well aware of all the historical facts relating to the Latin language, as I have a letter from the Faculty of History of the University of Valladolid with reference to this subject. Whatever the pronunciation of Latin was in Cicero's time, the fact remains that in Spain; Italy, and France Universities and schools pronounce Latin somewhat in accordance with the pronunciation of their own languages.

Slight differences there would be in the pronunciation

of Latin, but I do not agree that students of Latin in each of those countries would not understand each other. For " Caelo " an Italian would say " Chaylo," a Spaniard " Zaylo " or " Saylo," and a Frenchman " Saylo," which would be perfectly understood, but none of them would understand either " Kylo " or " Seelo." If we take " Feeit," a Scotsman would say " Faysit," a Spaniard Fayseet," an Italian " Faycheet," a Frenchman probably "" Faysee " and a reformer in England I take it " Faykeet." The Scotsman, Spaniard, Italian and Frenchman would all understand each other, but I am doubtful if Faykeet would be understood. In any case the hard K is not used either in Spain, Italy or France, and I see no object in continuing to use it in England. Neither in Spain, Italy nor France would W for V be understood saying, " Weni, widi, wici " for " Veni, vidi, vici."

recently- an article on Spain said Jorge " was pronounced " Horthy," but nothing could be further from the truth; because the proper phonetic sound of " Jorge " as pronounced by a Spaniard could not be represented on paper by any combination of letters• of the alphabet. I consider this a vital point that some of the phonetic sounds of any language cannot be properly represented by alphabetic letters, as for example, Loch Loehy, a loch in Scotland.--I am, Sir, &c., •