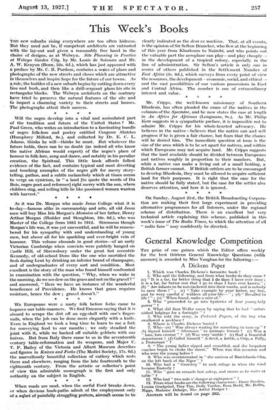 Mr. Cripps, the well-known missionary of Southern Rhodesia, has often

pleaded the cause of the natives in the columns of the Spectator, and he now states the case at length in An Africa for Africans (Longinans, 9s.). As Mr. Philip Kerr suggests in a sympathetic preface, it is impossible not to admire Mr. Cripps for his whole-hearted advocacy. He believes in the native—believes that the native can and will progress if he is given a fair chance, but fears that the chance will be denied him. The immediate question at issue is the size of the area which is to be set apart for natives, and within which Europeans may not acquire land. Mr. Cripps suggests that the land available should be divided between Europeans and natives roughly in proportion to their numbers. But, while a native can make a living out of a small holding, a British farmer cannot. If British settlers are to be encouraged to develop Rhodesia, they must be allowed to acquire sufficient land for their purposes. It is right that the case for the native should be fully stated, but the case for the settler also deserves attention, and here it is ignored.