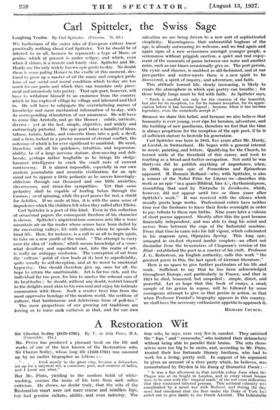 AVE barbarians of the outer isles of European culture know practically nothing about Carl Spitteler. Yet he should be of interest to us all, because he represents a type of Muse, or genius, which at present is under eclipse, and which, even when it shines, is a remote and lonely star. Spitteler and Mr. Hardy arc the only widely known epic poets to-day. No doubt there is some puling Homer in the cradle at this moment, des- tined to grow up a master of all the many and complex prob- lems of our social and moral condition which to-day are too much for our poets and which they can translate only piece- meal and intensively into poetry. That epic poet, however, will have to withdraw himself to an eminence from the country which he has explored village by village and laboured and bled in He will have to subjugate the overwhelming masses of knowledge and mere .mechanical information of to-day, with its corresponding stimulation of our awareness. He will have to come like Aristotle, and go like Homer : subtle, intricate, diverse ; yet at the last, simple, objective, and widely and embracingly.pictorial. The epic poet takes a handful of ideas, taboos, habits, faiths, and converts them into a god, a devil, and a hero, locked in a precise moment of eternal conflict, the outcome of which is for ever significant to mankind. He must, therefore, with all his quickness, intuition, and impression- ability, be of a large nervous stature, slow-moving and deli- berate, perhaps rather laughable as he brings his sledge- hammer intelligence to creek the small nuts of current controversy. It is almost impossible, especially in our own modern journalistic and neurotic civilization, for an epic mind not to appear a little pedantic as he moves knowingly- oblivious through our thousand and one little anxieties, clevernesses, and straw-fire sympathies. Yet that same pedantry shall be capable of hurling Satan through the Cosmos ; or of spinning, while.the poet pauses for rest, a shield for Achilles. If we smile at him, it is with the same sense of impudence which the children felt when they called after Elisha.

Carl Spitteler is a poet of this kind. Even in this collection of occasional papers the consequent freedom of his character is shown. Spitteler's unpretentious sureness acts like a tonic mountain air on the reader whose senses have been dulled by the enervating valleys, fat with culture, where he spends his tired life. Here, for instance, is a call to us all to begin again, to take on a new youth of the mind. " The attempt to carry over the idea of culture,' which means knowledge of a some- what desultory and superficial cast, into the realm of art, is really an unhappy confusion. The conception of art from the ' culture ' point of view leads at its best to superficiality, quite usually to self-deception, and at its worst to emotional hypocrisy. One should therefore give up, once for all, the hope to attain the unattainable. Art is far too rich, and the individual far too poor, for him to master the colossal sum of its beatitudes ; he should, without any doubt, restrict himself to the delights most akin to his own soul and enjoy his intimate communion with those. Such a resolve frees him from the most oppressive bondage of the modern world, the serfdom of culture, that burdensome and deleterious form of poll-tax."

The mere proportions of our growing art traditions are forcing us to some such catharsis as that, and for our own

salvation we are being driven to a new sort of sophisticated simplicity. Knowingness, that unbeautiful bugbear of the age, is already outwearing its welcome, and we find again and again signs of a new seriousness amongst younger people, a seriousness without priggish unction, a quiet and real enjoy- ment of the moments of pause between one noise and another noise, such as our times occasionally give us. The pert person. the cynic and sheerer, is snubbed as old-fashioned, and at our jazz-parties and motor-meets there is a new spirit to be discovered, a spirit of inquiry, and adventure, and faith.

This attitude toward life, slowly increasing, is likely to create the atmosphere in which epic poetry can breathe ; for those kingly lungs must be fed with faith. As Spitteler says,

Because we share this belief, and because we also believe that humanity is ever young, ever ripe for heroism, adventure, and the building of new pantheons, therefore we feel that the time is always propitious for the reception of the epic poet, if he is of sufficient stature to bestride his generation.

Carl Spitteler was born in 1845, five years after Mr. Hardy, at Liestal, in Switzerland. He began with a general interest in music, painting, and letters. Qualifying for the Church; he turned aside at the threshold of this career, and took to teaching as a bread-and-butter occupation. Not until he was thirty-six did he publish anything of importance, when, in 1880, his prose epic of Prometheus and Epimetheus appeared. M. Romain Rolland—who, with Spitteler, is also a winner of the Nobel Prize for Literat-ire—describes this work as an epic "in a quasi-Biblical, rhythmiCaLprose, resembling that used by Nietzsche in Zarathaetra, which, however, did not appear until two or three years after Spitteler's work." It was received with the silence which usually greets large works. Professional critics have neither time nor the freshness to leave their flocks overnight in order to pay tribute to those rare births. Nine years later a volume of short poems appeared. Shortly after this the poet became financially independent, and was able to drag his mind and nerves from between the cogs of the 'Industrial machine. From that time he came into his full vigour, which culminated in his magnum opus, Olympian Spring. This long epic, arranged in six-foot rhymed iambic couplets—an effect not dissimilar from the hexameters of Chapman's version of the Iliad—established the poet as a master of his craft. Professor J. G. Robertson, an English authority, calls this work " the greatest poem in this, the last epoch of German literature."

Here is no space to give further particulars of his life and work. Sufficient to say that he has been acknowledged throughout Europe, and particularly in France, and that in 1924 he died, honoured, but unspoiled ; simple, direct, and powerful. Let us hope that this book of essays, a small sample of his genius in repose, will be followed by some courageous attempt to give us that genius in action, so that when Professor Frankel's biography appears in this country, we shall have the necessary enthusiastic appetite to approach it.