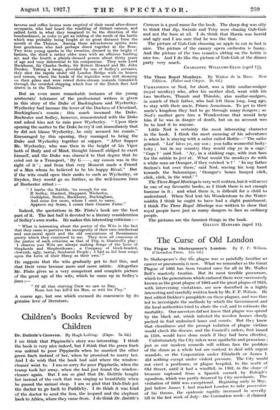 Editien. (Faber and Gwyer. 3s. 6d.) UMMANODDA or Nod, for short, was a little mullar-mulgar (royal monkey) who, after his mother died, went with his two brothers, Thumb and Thimble, also mullar-mulgars, in search of their father, who had left them long, long ago, to stay with their uncle, Prince Assasimon. To get to their uncle's kingdom they had to go through many dangers ; so Nod's mother gave hint a Wonderstone that would 'help him if he was in danger of death, but on no account was he to lend it to anyone.

Little Nod is certainly the most interesting character in the book. I think the most amusing of his adventures is when he is staying with a sailor called Bottle—" The sailor grinned. Lor' bless ye, my son ; you talks wonnerful hoity- toity ; but in my country they would clap ye in a cage.' ' Cage ? ' said Nod. ` Ay, in a stinking cage, with iron bars for the rabble to jeer at. What would the monkeys do with a white man an Oomgar, if they cotched 'n ? " In my father Seelem's but over there,' said Nod, waving his long hand towards the Sulemnagar, Oomgar's bones hanged click, click, click, in the wind.' " The Three Royal Monkeys is very well written, but it will never be one of my favourite books, as I think there is not enough humour in it ; and what there is, is difficult for a child to understand. When Nod lent his Wonderstone to the Water- middin I think he ought to have had a slight punishment. I think The Three Royal Monkeys was written to show that royal people have just as many dangers to face as ordinary people.

The pictures are the funniest things in the book.