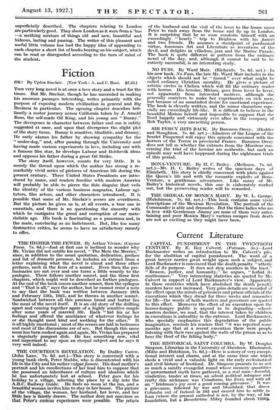 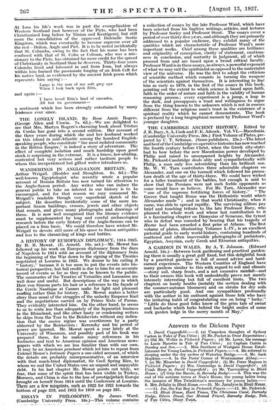 THE HISTORICAL SAINT COLUMBA. By W. Douglas Simpson, Librarian in

the University of Aberdeen. Illustrated. (Milne and Hutchison, 7s. 6d.)—Here is a story of very except- tional interest and charm, and at the same time one which sheds a vivid and a valuable light on the early ecclesiastical and civil history of Scotland. Dr. Simpson presents to us not so much a saintly evangelist round whose memory quantities of unwarranted myth have gathered, as a real man—forceful, vindictive, tender at times, an adroit political intriguer and crafty (his nickname was Crimthann, the Fox), and with all an " Irishman's joy over a good rousing grievance." It was a grievance, followed by war and bloodshed, that drove Columba out of Ireland in 563 and caused him to settle in Iona (where the present cathedral is not, by the way, of his foundation, but a Benedictine Abbey founded about 1200).

At Iona his life's work was in part the evangelization of Western Scotland (not however of the Picts, who had been Christianized long before by Ninian and Kentigern); but still more the consolidation of the oppressed Dalriadic Scotic Kingdom, which was eventually to become supreme over all the rest—Briton, Angle and Pict. It is to be noted incidentally that St. Columba, owing to the fact that his name has been confused with that of St. Colm or Colman, who was a mis- sionary to the Picts, has obtained far more credit for the spread of Christianity in Scotland than he deserves. Thirty-four years Columba lived and laboured in and from Iona, but always within him burned the passionate longing of an Irish Celt for his native land, as evidenced by the ancient Irish poem which represents him saying :—

Large is the tear of my soft grey eye When I look back upon Erin, and again :- I have loved Erin's land of cascades, All but its government—

a sentiment which has been strongly entertained by many Irishmen ever since.