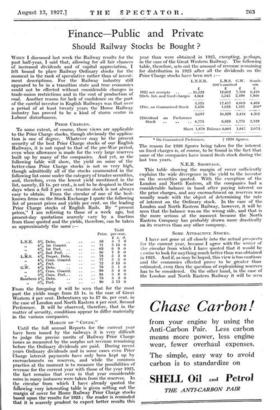 Should Railway Stocks be Bought ?

WHEN I discussed last week the Railway results for the past half-year, I said that, allowing for all fair chances of increased dividends and of capital appreciation, I felt bound to place Railway Ordinary stocks for the moment in the rank of speculative rather than of invest- ment descriptions. For the Railway industry still appeared to be in a transition state and true economies could. not be effected without considerable changes in trade-union restrictions and in the cost of production of coal.. Another reason for lack of confidence on the part of the careful investor in English Railways was that over a period of at least twenty years the Home Railway industry has proved to be a kind of storm centre in Labour disturbances.