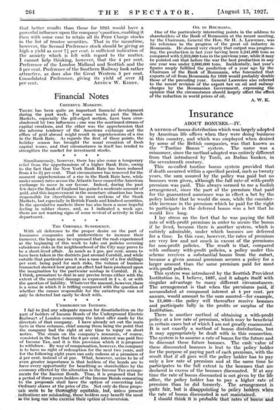 Page 24, 13 August 1927 — Simultaneously, however, there has also come a temporary relief from
Close

Simultaneously, however, there has also come a temporary relief from

the apprehensions of a higher Bank Rate, owing to the fact that the New York Bank Rate has been reduced from 4 to 31 per cent. That circumstance has removed for the moment apprehensions of a rise in the Bank Rate here, while easier money rates across the Atlantic have caused the American exchange to move in our favour. Indeed, during the past few days the Bank of England has gained a moderate amount of gold, and this improvement in the monetary situation has been responsible for cheerfulness in most sections of the Stock Markets, but especially in British Funds and kindred securities. In the speculative markets there has also been a more hopeful feeling in rubber shares, and, as I indicated a week ago, there are not wanting signs of some revival of activity in that department. * *