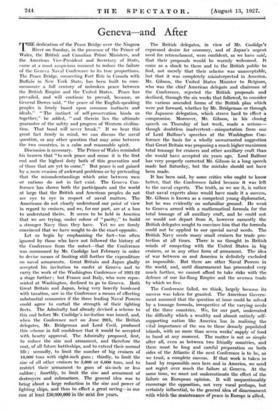 THE dedication of the Peace Bridge over the Niagara River on Sunday, in the presence of the Prince of Wales, the British and Canadian Prime Ministers, and the American Vice-President and Secretary of State, came at a most auspicious moment to reduce the failure of the Geneva Naval Conference to its true proportions. The Peace Bridge, connecting Fort Erie in Canada with Buffalo in New York State, has been built to com- memorate a full century of unbroken peace between the British Empire and the United States. Peace has prevailed, and will continue to prevail, because, as General Dawes said, " the peace of the English-speaking peoples is firmly based upon common instincts and ideals." " The instinct of self-preservation binds us together;" he added, " and therein lies the ultimate guarantee of the safety and progress of Western civiliza- tion. That bond will never break." If we bear this great fact firmly in mind, we can discuss the naval question, or any other question that may arise between the two countries, in a calm and reasonable spirit Discussion is necessary. The Prince of Wales reminded his hearers that "to seek peace and ensue it is the first end and the highest duty both of this generation and of those that are yet to come." But-peace is not gained by a mere evasion of awkward problems or by pretending that the misunderstandings which arise between men or nations do not in fact exist. The Geneva Con- ference has shown both the participants and the world at large that the British and American peoples do not see eye to eye in respect of naval matters. The Americans do not clearly understand our point of view in regard to cruisers, and we, for our part, are at a loss to understand theirs. It seems to be held in America that we are trying, under colour of " parity," to build a stronger Navy than they have. Yet we are firmly convinced" that we have sought to do the exact opposite.

Let us begin by emphasizing the fact—too often ignored by those who have not followed the history of the Conference from the outset—that the Conference was summoned by Mr. Coolidge last February in order to devise means of limiting still further the expenditure on naval armaments. Great Britain and Japan gladly accepted his invitation to confer at Geneva and to carry the work of the Washington Conference of 1921-22 a stage further ; but France and Italy, who were repre- sented at WashingtOn, declined to go to Geneva. Both Great Britain and Japan, being very heavily burdened with taxation, saw in the Conference a means of effecting substantial economies if the three leading Naval Powers could agree to curtail the strength of their fighting fleets. The Admiralty had already devised a scheme to this end before Mr. Coolidge's invitation was issued, and, when the Conference met on June 20th, the British delegates, Mr. Bridgeman and Lord Cecil, produced this zeheme in full confidence that it would be accepted with hearty approval. The Admiralty proposed, first, to reduce the size and armament, and therefore the cost, of all future battleships, and to extend their normal life ; secondly, to limit the number of big cruisers of 10,000 tons with eight-inch guns ; thirdly, to limit the size of all other cruisers to 5,000 or 6,000 tons, and to restrict their armament - to guns of six-inch or less calibre ; fourthly, to limit the size and armament of destroyers and submarines. The general idea was to bring about a large reduction" in the size and power of fighting ships, and thus to effect a great saving—in our ease at least f50,000,000 'the net few years. The British delegates, in view of Mr. Coolidge's expressed desire for economy, and of Japan's urgent need for retrenchment, were confident, as we have said; that their proposals would be warmly welcomed. It came as a shock to them and to the British public to find, not merely that their scheme was unacceptable, but that it was completely misinterpreted in America. Mr. Gibson, the United States Minister to Belgium, who was the chief American delegate and chairman of the Conference, rejected the British proposals and declined, through the six weeks that folloWed, to consider the various amended forms of the British plan which were put forward, whether by Mr. Bridgeman or through the Japanese delegation, which strove hard to effect a compromise. Moreover, Mr. Gibson, in his closing speech on Thursday of last 'week, made a serious— though doubtless inadvertent—misquotation from one of Lord Balfour's speeehes at the Washington Con- ference the basis for a wholly unwarranted suggestion that Great Britain was proposing a much higher maximum total tonnage for cruisers and other auxiliary craft than she would have accepted six years ago.' Lord Balfour has very properly corrected Mr. Gibson in a long speech made last Saturday, but the mistake should not have been made.

It has been said, by some critics who ought to know better, that the Conference failed because it was left to the naval experts. The truth, as we see it, is rather that naval experts alone would have made it a success. Mr. Gibson is known as a competent young diplomatist, but he was evidently on unfamiliar ground. He went to Geneva armed with a mathematical formula for the total tonnage of all auxiliary craft, and he could not or would not depart from it, however earnestly the British delegates sought to convince him that the formula could not be applied to our special naval needs. The British Navy needs many small cruisers for trade pro- tection at all times. There is no thought in 'British minds of competing with the United States in big cruisers, or in any other form of armament. The idea of war between us and America is definitely excluded as impossible. But there are other Naval Powers in the world, and, until disarmament has proceeded very much further, we cannot afford to take risks with the defence of our far-flung 'Empire and the oversea trade by which we live.

The Conference failed, we think, largely because its success was taken for granted. The American Govern- ment assumed that the question at issue could be solved by a tonnage formula, irrespective of the varying needs of the three countries. We, for our part, underrated the difficulty which a wealthy and almost entirely self- supporting nation like America has in realizing the vital importance of the sea to these densely populated islands, with no more than seven weeks' supply of food in- hand at any moment. The matter is not so simple after all, even as between two friendly countries, and there must be long and careful preparation on both sides of the Atlantic if the next Conference is, to be, as we trust, a complete success. If that work is taken in hand by responsible men here and in America, we need not regret over much the failure at Geneva. At the same time, we must not underestimate the effect of the failure on European opinion. It will unquestionably encourage the opposition, not very vocal perhaps, but certainly influential, to the general idea of disarmament with which the maintenance Of peace in Europe is allied,