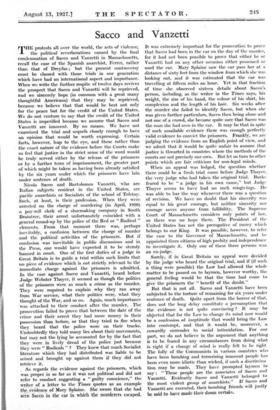 THE protests all over the world, the acts of violence, the political reverberations caused by the fmal condemnation of Sacco and Vanzetti in Massachusetts, recall the case of the Spanish anarchist, Ferrer, rather than that of Dreyfus ; but the present controversy must be classed with those trials in our generation which have had an international aspect and importance. When we write the further respite of twelve days revives the prospect that Sacco and Vanzetti will be reprieved, and we sincerely hope (in common with a great many thoughtful Americans) that they may be reprieved, because we believe that that would be best not only for the peace but for the credit of the United States. ;We do not venture to say that the credit of the .United , States is imperilled because we assume that Sacco and Vanzetti are innocent. By no means. We have not examined the trial and sequels closely enough to have an opinion that would be worth expressing. Certain „facts, however, leap to the. eye, and these rather than the exact nature of the evidence before the Courts make us feel that justice in the strict sense of the word would be truly served either by the release of the prisoners ,.or. by a further term of imprisonment, the greater part of which might be taken as having been already satisfied by the six years under which the prisoners have lain ,under sentence of death.

Nicola Sacco and Bartolomeo Vanzetti, who are Italian subjects resident in the United States, are pacific anarchists or Socialists of the school of Tolstoy. Such, at least, is their profession. When they were arrested on the charge of murdering (in April, 1920) .a pay-roll clerk of a shoemaking company in South ,Braintree, their arrest unfortunately coincided with a general round-up by the police of the Red or " Radical " .elements. From that moment there was, perhaps inevitably, a confusion between the charge of murder -and the political activities of the prisoners. But if .confusion was inevitable in public discussions and in the Press, one would have expected it to be sternly banned in court. One of the first duties of a judge in Great Britain is to guide a trial within such limits that no piece of evidence which is not strictly relevant to the immediate charge against the prisoners_ is admitted. In the case against Sacco and Vanzetti, heard before Judge Webster Thayer, it seemed as though the politics of the prisoners were as much a crime as the murder. They were required to explain why they ran away from War service, what their polities were, what they thought of the War, and so on. Again, much importance was attached to their conduct after the murder. The prosecution failed to prove that between the date of the crime and their arrest they had more money in their possession than before, or that they tried to flee when they heard that the police were on their tracks. Undoubtedly they told many lies about their movements, but may not the lying be accounted for by the fact that they were in lively dread of the police just because they were " Radicals " ? They knew that much Socialist literature which they had distributed was liable to be seized and brought up against them if they . did not retrieve it.

AS regards the evidence against the prisoners, which was proper in so far as it was not political and did not refer to conduct suggesting a " guilty conscience," the writer of a letter to the . Times quotes as an example the. evidence of Mary Splaine. She swore that she had seen Sacco in the car in which the murderers escaped. It was extremely important for the prosecution to prove that Sacco had been in the car on the day of the murder, for it had not been possible to prove that either he or Vanzetti had on any other occasion either possessed or used the car. Mary Splaine saw the car pass her at a distance of sixty feet from the window from which she was looking out, and it was estimated that the car was travelling at fifteen miles an hour. Yet in that fraction of time she observed sixteen details about Sacco's person, including, as the writer in the Times says, his weight, the size of his hand, the colour of his shirt, his complexion and the length of his hair. Six weeks after the murder she failed to identify -Sacco, but when she was given further particulars, Sacco then being alone and not one of a crowd, she became quite sure that Sacco was the man she had seen in the car. It may be that in spite of such assailable evidence there was enough perfectly valid evidence to convict the prisoners. Frankly, we are judging the evidence from an English point of view, and we admit that it would be quite unfair to assume that 'justice is thwarted in countries where the methods of the :courts are not precisely our own. But let us turn to other .points which are fair .criticism for non-legal minds.

When an appeal was lodged, the question whether there could be a fresh trial came before Judge Thayer, the very judge who had taken the original trial. Burke feared to be " a judge in his own cause," but Judge :Thayer seems to have had no such misgivings. He was able to bar the way whenever there was a question of revision. We have no doubt that his sincerity was equal to his great courage, but neither sincerity nor .courage saves anyone from fallibility, The Supreme Court of Massachusetts . considers only points of law, so there was no hope there. The President of the United States has not the prerogative of mercy which belongs to our King. It was possible, however, to refer the case to the Governor of Massachusetts, and he appointed three citizens of high probity and independence to investigate it. Only one of these three persons was an ex-judge.

Surely, if in Great Britain an appeal were decided by the judge who heard the original trial, and if (if such a thing were possible) the Law had allowed the whole matter to be passed on to laymen, however worthy, the general feeling would be that the time had come to give the prisoners the " benefit of the doubt."

But that is not all. Sacco and Vanzetti have been subjected to the torture of remaining for six years under sentence of death. Quite apart from the horror of that, does not the long delay constitute a presumption that the evidence is not quite convincing ? It may be objected that for the Law to change its mind now would be a confession of ineptitude that would bring the Law into contempt, and that it would be, moreover, a cowardly surrender to social intimidation. For our part, we do not believe in the argument that anything is to be feared in any circumstances from doing what is right if a change of mind is really felt to be right The folly of the Communists in various countries who have been bombing and terrorizing innocent people has been even more idiotic than wicked, if such a discrimina tion may be made. They have prompted laymen to say : " These people are the associates of Sacco and Vanzetti. Evidently Sacco and Vanzetti belonged to the most violent group of anarchists." If Sacco and Vanzetti are executed, their bombing friends will justly be said to have made their doom certain,