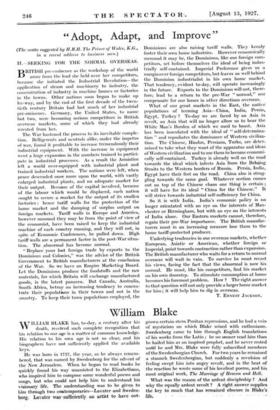 (The motto suggested by- H.R.H. The Prince of Wales, K .G., in a recent address to business men.) 11.—SEEKING FOR THE NORMAL OVERSEAS.

BRITISH pre-eminence as the workshop of the world arose from the lead she held over her competitors, because she initiated the Industrial Revolution—the application of steam and machinery to industry, the concentration of industry in machine houses or factories in the towns. Other nations soon began to make up lee-way, and by the end of the first decade of the twen- tieth century Britain had lost much of her industrial pre-eminence. Germany, the United States, to name but two, were • becoming serious competitors in British overseas markets, some of which they had already wrested from her.

The War hastened the process to its inevitable comple- tion. Belligerents and neutrals alike, under the impetus of war, found it profitable to increase tremendously their industrial equipment. With the increase in equipment went a huge expansion in the numbers trained to partici- pate in industrial processes. As a result the Armistice left a world over-equipped with industrial plant and trained industrial workers. The nations were left, when peace descended once more upon the world, with vastly enlarged industrial plants, and no adequate market for their output. Because of the capital involved, because of the labour which would be displaced, each nation sought to secure a market for the output of its swollen factories : hence tariff walls for the protection of the home market and the dumping of surplus output on foreign markets: Tariff walls in Europe and America, however unsound they may be from the point of view of the economist, have been raised to keep the industrial Machine of each country running, and they will not, in spite • of Economic Conferences, be pulled down. High tariff walls are a permanent factor in the post-War situa- tion. The abnormal has become normal.

" Replace your lost foreign trade by exports to the Dominions and Colonies," was the advice of the British Government to British manufacturers at the conclusion of the War. So we have an Empire Marketing Board. Let the Dominions produce the foodstuffs and the raw materials, for which Britain will exchange manufactured goods, is the latest panacea. But Canada, Australia, South. Africa, betray an increasing tendency to concen- trate their populations in their towns and not in the country. To keep- their town populations employed,. the Dominions are also raising tariff walls. They keenly foster their own home industries. However economically unsound it may be, the Dominions, like our foreign com- petitors, set before themselves the ideal of being indus- trially self-contained. Imperial Preference gives us margin over foreign competitors, but leaves us well behind the Dominion industrialist in his own home market. That tendency, evident to-day, will operate increasingly in the future. Exports to the Dominions will not, there- fore; lead to a return to the pre-War " normal," nor compensate for our losses in other directions overseas.

What of our great markets in the East, the native populations of teeming Asia—China, India, Persia, Egypt, Turkey ? To-day we are faced by an Asia in revolt, an Asia that will no longer allow us to bear the White Man's Burden of which we used to boaSt. Asia has been inoculated with the ideal of " self-determina- tion " and repudiates the dominance of Western civiliza- tion. The Chinese, Hindus, Persians, Turks, are deter- mined to take what they want of the apparatus and ideas of Western civilization and to use them to become economi- cally self-contained. Turkey is already well on the road towards the ideal which infects Asia from the Belting Straits to the Western borders of Russia. Persia, India, Egypt have their feet on the road. China also is strug- gling towards the same goal. Whatever section comes out on top of the Chinese chaos one thing is certain ; it will have for its ideal "China for the Chinese." It will strive towards industrial self-sufficiency for China.

Underlying tendencies in our overseas markets, whether European, Asiatic or American, whether foreign or Imperial, point towards contraction rather than expansion. The British manufacturer who waits for a return to normal overseas will wait in vain. To survive he must 'recast his views, facing the fact that the abnormal is now his normal. He must, like his competitors, find his market on his own doorstep. To stimulate consumption at home becomes his foremost problem. How ? The right answer to that question will not only provide a larger home market for him ; it will help him to dig in overseas.