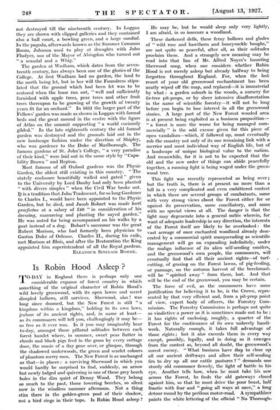 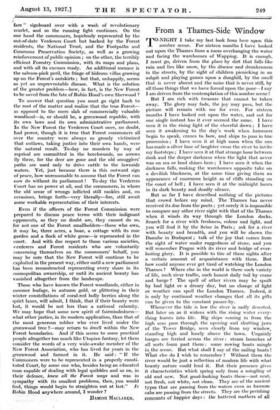 TO-DAY in England there is perhaps only one considerable expanse of forest country in which something of the original character of Robin Hood's wild lovely greenwood, with its open lawns and secret dimpled hollows, still survives. Sherwood, alas was long since doomed, but the New Forest is still " a kingdom within a kingdom," holding to its own laws, jealous of its ancient rights, and, in name at least— as its commoners will tell you, challengingly it may be— as free as it ever was. In it you may imaginably hear to-day, amongst those pillared solitudes between each forest hamlet where, in summer, sweet peas flutter in clouds and black pigs feed in the grass by every cottage door, the music of a day gone over, or glimpse, through the shadowed underwoods, the green and scarlet colours of phantom merry men. The New Forest is as unchanged as that—in places : a surviving Sherwood in which you would hardly be surprised to find, suddenly, an arrow but newly lodged and quivering in one of those grey beech boles in the dim quiet of Denny Wood. They belong so much to the past, those towering beeches, so silent now in the windless suinrner afternoon. Not a thing stirs there in the golden-green pool of their shadow, not a bird sings in 'their tops. Is Robin Hood asleep ? He may be, but he would , sleep only very lightly, I am afraid, in so insecure a woodland.

These darkened dells, these ferny hollows and glades of " wild rose and hawthorn and honeysuckle boughs," are not quite so peaceful, after all, as their solitudes proclaim them. And a strangely new meaning may be read into that line of Mr. Alfred Noyes's haunting Sherwood song, when one considers whether Robin Hood is not merely asleep but already halfway to being forgotten throughout England. For, when the last resort of your old- greenwood enchantment has been neatly wiped off the map, and replaced—it is immaterial by what : a garden suburb in the woods, a nursery for fir-tree pit-props, or by sheer intensive disafforestation in the name of scientific forestry—it will not be long before you begin to lose interest in all the greenwood stories. A large part of the New Forest wooded area is at present being exploited as a business proposition- " a forest is none the worse for being managed com- mercially " is the odd excuse given for this piece of open vandalism—which, if followed up, must eventually rob the country not only of its one remaining link with a merrier and most individual way of English life, but of a landscape of unique biological value to the nation. And meanwhile, for it is not to be expected that the old and the new order of things can abide peacefully together, a running fight is being waged under the green- wood tree.

This fight was recently represented as being over ; but the truth is, there is at present no more than a lull in a very complicated and even embittered contest in which there are several groups of combatants, some with very strong views about the Forest either for or against its preservation, some conciliatory, and some with no special views at all. The danger is that the fight may degenerate into a general mei& wherein, for want of adequate leadershipin any direction, the interests of the Forest itself are likely to be overlooked : the vast acreage of once enchanted woodland already dese- crated by a commercial spirit masquerading as scientific management will go on expanding indefinitely, under the malign influence of its alien self-seeding conifers, and the greenwood's own people, the commoners, will eventually find that all their ancient rights—of turf-. cutting, of grazing on the Forest lawns, of pig-feeding, or pannage, on the autumn harvest of the beechmast, will be " spirited away " from them, lost. And that will be the end of the greenwood, you may be certain.

The force of evil, as the commoners have some justification for believing it to be, is the Crown, repre- sented by that very efficient and, from a pit-prop point of view, expert body of officers, the Forestry Com- mission. The Forestry Commission is perhaps not quite so vindictive a power as it is sometimes made out to be : it has rights of enclosing, roughly, a quarter of the Forest for the continuance of its own unlovely handi- work. Naturally enough, it takes full advantage of those rights ; but it also exceeds them in every way except, possibly, legally, and in doing so it emerges from the contest as, beyond all doubt, the greenwood's surest enemy. " What business have they to close up all our ancient driftivays and allow their self-seeding firs to dry up all our cattle pastures ? " demands one sturdy old commoner fiercely, the light of battle in his eye. Another tells how, when he must take his sow across the Forest, he finds the old gateways closed against him, so that he must drive the poor beast, half frantic with fear and " going all ways at once," a long detour round by the perilous motor-road. A sympathizer paints the white lettering of the official " No Thorough-. fare " signboard over with a wash of revolutionary scarlet, and so the running fight continues. On the one hand the commoners, hopelessly represented by the out-of-date Verclerers Court but backed by the Forest residents, the National Trust, and the Footpaths and Commons Preservation Society, as well as a growing reinforcement of public opinion ; on the other, the terribly efficient Forestry Commission, with its maps and plans, and with all its excuses ready. An additional menace is the salmon-pink peril, the fringe of hideous villas growing up on the Forest's outskirts ; but that, unhappily, seems as yet an unpreventable disease. What is the solution of the greater problem—how, in fact, is the New Forest to be saved from the fate of Robin Hood's own Sherwood ?

To answer that question you must go right back to the root of the matter and realize that the true Forest— as opposed to the mere slab of commercially valuable woodland—is, or should be, a greenwood republic, with its own laws and its own administrative parliament. In the New Forest the Verderers Court once, no doubt, had power, though it is true that Forest commoners all over the country were always so grossly victimized that outlaws, taking justice into their own hands, were the natural result. To-day no murders by way of reprisal are committed in the beechwoods, no arrows fly there, for the deer are gone and the old smugglers' paths are used only to drive cattle to the lawnside waters. Yet, just because there is this outward sign of peace, how unreasonable to assume that the Forest can now do without its parliament ! To-day the Verderers Court has no power at all, and the commoners, in whom the old- sense of wrongs inflicted still rankles and, on occasions, brings forth—very literally—fire, still await some workable representation of their interests.

Even if the officers of the Forest Commission were prepared to discuss peace terms with their indignant opponents, as, they no doubt are, they cannot do so, roi not one of the Forest smallholders—those who own, it may be, three acres, a boar, a cottage with its rose garden and a flock of white geese—is represented in the court. And with due respect to those various societies, verderers and Forest residents who are voluntarily concerning themselves on the commoners' behalf, you may be sure that the New Forest will continue to be exploited in the present way, either until a new parliament has been reconstructed representing every share in its cosmopolitan ownership, or until its ancient beauty has vanished altogether from the landscape.

Those who have known the Forest woodlands, either in summer leafage, in autumn gold, or glittering in their winter constellations of coral-red holly berries along the quiet lanes, will admit, I think, that if their beauty were lost, it would be not less than a national calamity. We may hope that some new spirit of fairmindedness-- what other justice, in its modern application, than that of the most generous robber who ever lived under the greenwood tree ?—may return to dwell within the New Forest boundaries. And if this seems to some practical people altogether too much like Utopian fantasy, let them consider the words of a very wide-awake member of the New Forest Association, who has lived for years in the greenwood and farmed in it. He said : " If the Commoners were to be represented in a properly consti- tuted Court, by some one who, besides being an educated man capable of dealing with legal quibbles and so on, in their defence, knew all the Forest ways and was in sympathy with its smallest problems, then, you would find, things would begin to straighten out at last." Is Robin Hood anywhere around, I wonder ?