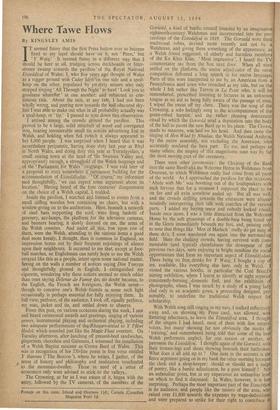 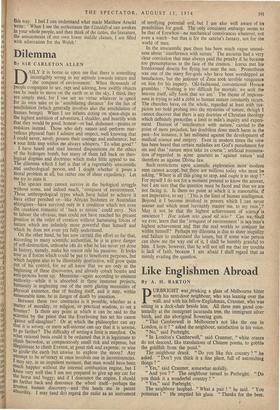 IT seemed funny that the first Press button ever to become fixed to my lapel should have on it, not ' Press.' but ' Y Wag.' - It seemed funny in a different way that I should be here at all, trudging across duckboards or litter- strewn swamp towards the pavilion of the Royal National Eisteddfod of Wales; I, who five years ago thought of Wales as a rugger ground with Coder Idris'on one side and a spoil- heap on the other, populated by pit-dirty miners who only stopped singing ' All Through the Night' to bawl ' Look you to goodness whateffer ' at ,one another, and subjected to con- tinuous rain. About the rain, at any rate, I had not been wholly.wrong, and peering now towards the half-obscured sky- line I was able to make out what in all probability actually was a spoil-heap, or ' tip.' I paused to note down this observation. 1 arrived among the crowds around the pavilion. This proved to be a large, solid structure of wood and corrugated iron, bearing innumerable small tin notices advertising Izal in Welsh, and holding when full (which it always appeared to be) 8,000 people. I was surprised when I heard that it was .nevertheless peripatetic, having done duty last year at Rhyl in North Wales, and doing duty this year at Ystradgynlais, a small mining town at the head of the Swansea Valley and, appropriately enough, a stronghold of the Welsh language and of the ' Parliament for Wales' campaign: I was told later of a proposal to erect somewhere a permanent building for the accommodation of Eisteddfodau. ' Of course,' my informant said thoughtfully, ' we can expect some argument about its location.' Having heard of the four centuries' disagreement on the choice of a Welsh capital, I nodded.

Inside the pavilion, I watched and listened to events from a small stifling wooden box containing no chairs, but with a window giving on to the auditorium. Here, beneath a network of steel bars supporting the roof, were hung baskets of greenery, arc-lamps, the platform for the television cameras, and banners bearing, it slowly dawned on me, the arms of the Welsh counties. And under all this, row upon row of them, were the Welsh, attending to the various items a good deal more keenly, I thought, than is common in England, an impression borne out by their frequent enjoinings of silence upon their neighbours. It occurred to me that, except at foot- ball matches, an Englishman can rarely hope to see the Welsh arrayed like this as a people, intent upon some national matter. Seeing on the walls a number of notices saying Dim Ysmygu and thoughtfully glossed in English, I extinguished my cigarette, wondering why these notices seemed so much odder than ones saying Defense de Fumer do; no doubt because, to the English, the French are foreigners, the Welsh never— though to conceive one's Welsh friends in some such light occasionally is perhaps essential for fully enjoying them. In full view, perforce, of the audience, I took off, equally perforce, my mac, jacket and tie, and settled down to observe. From this post, on various occasions during the week, I saw and heard ceremonial awards and greetings, singing of various genres, instrumental playing and orchestral playing, including two adequate performances of the,,Rhagarweiniad to Y Fffiwt Hudol, which sounded just like the Magic Flute overture. On Tuesday afternoon, after lunching off pressed-beef sandwiches, gingernuts, chocolate and Guinness, I witnessed the installation of a Welsh Baptist minister as Crown Bard of Wales. This was in recognition of his 350-line poem in free verse entitled Y Bannau (' The Beacon '), where he writes, I gather, of the sense of history and philosophy and meditation vouchsafed to the mountain-dweller. Those in need of a sense of economics only were advised to stick to the valleys.

The Crowning, as far as I was aware of it. began with the entry, followed by the TV cameras, of the members of the Gorsedd, a kind of bardic council founded by an imaginativ eighteenth-century Welshman and incorporated into the pro ceedings of the Eisteddfod in 1819. The Gorsedd wore their traditional robes, devised more recently and not by a Welshman, and giving them something of the appearance, as: a Welsh friend suggested, of elderly and harmless members• of the Ku Klux Klan. Most impressive ', I heard the TV commentator say from the box next door. When all were settled on the platform, the senior adjudicator of the verse competition delivered a long speech in his native language. Parts of this were interpreted to me by an American from a Pennsylvania steel town who crouched at my side, but on tho whole I felt rather like Tarrou in La Peste who, it will b remembered, prescribed listening to lectures in an unknow tongue as an aid to being fully aware of the passage of time. I wiped the sweat off my chest. There was the song of the Crowning, a solo feelingly sung to the accompaniment of the green-robed harpist,' and the rather pleasing democratic ritual by which the Gorsedd send a deputation into the body of the hall to escort the new Bard up to his place. The Crown, made to measure, was laid on his head. And then came th singing of Hen Wlad fy Nhadau, the Welsh National Anthem, by the entire assembly, not excluding the American, who accurately rendered the bass part. To me, and perhaps to, many others, the singing of this magnificent tune was by far the most moving part of the ceremony.

There were other ceremonies: the Chairing of the Bard (not the same Bard) and the Welcome Home to Welshmen from Overseas, to which Welshmen really had come from all parts of the world. As I approached the pavilion for this occasion, Abide with Me' was booming out of the loudspeakers with such fervour that for a moment I supposed the place to be on fire and all exits somehow sealed up. But all was well, and the crowds drifting towards the entrances were absent mindedly interspersing their talk with snatches of the various parts. I added my baying tenor and nobody looked round.' Inside once more, I was a little distracted from the Welcome Home by the soft groanings of a double-bass being tuned up in the Gents immediately beneath my feet, and, pausing only to note that things like Men of Harlech ' really do get sung at these do's, I soon wandered out again into the surrounding field. Here the chatting crowds, having survived with com- mendable (and typical) cheerfulness the downpour of the previous two days, were enjoying in bright sunshine the social opportunities that form an important aspect of Eisteddfodau. There being no free, drinks for Y Wasg, I bought a cup of tea, available, like everything else here, only in Welsh. I visited the various booths, in particular • the Coal Boarrs mining exhibition, where I learnt to identify at sight superiot consistently-burning .domestic fuel, and the exhibition of photographs, where I was struck by a study of a young lady clad only in an academic gown, a proceeding designed. pre sumably, to underline the traditional Welsh respect for scholarship.

With Welsh song still ringing in my cars, I walked reflectively away and, on showing my Press card, was allowed, with flattering reluctance, to leave the Eisteddfod area. I thought of the singers I had heard, most of them with fine natural voices, but many showing far too obviously the marks of training,' and remembered being told that some of the best Welsh performers neglect, for one reason or another, to patronise the Eisteddfod. I thought again of the Gorsedd, with, their trouser-legs and shoes showing beneath their bathrobes. What does it all add up to ? One item in the account is the fierce argument going on in my bank the other morning between the clerk and a shop-keeper: should or should not a judge of poetry, like a bardic adjudicator, be a poet himself '? Not an unfamiliar point, but in my experience an unfamiliar level on which to find it discussed. In Wales, however, it is less surprising. Perhaps the most important part of the Eisteddfod is its audience, and people like the miners of the area, who raised over £1,800 towards the expenses by wage-deduction, and were prepared to strike for their right to contribute this way. I feel I can understand what made Matthew Arnold Write: When I see the enthusiasm the Eisteddfod can awaken in your whole people, and then think of the tastes, the literature, the amusements of our own lower middle classes, I am filled with admiration for the Welsh.'