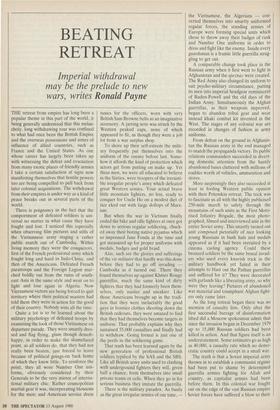 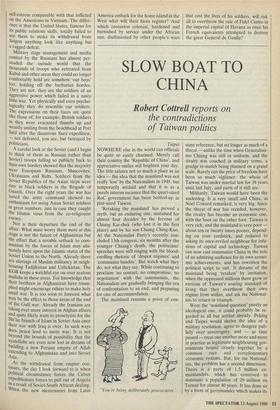 THE retreat from empire has long been a popular theme in this part of the world, it being generally understood that this melan- choly, long withdrawing roar was confined to what had once been the British Empire and the overseas possessions and zones of influence of allied countries, such as France and the United States. As one whose career has largely been taken up with witnessing the defeat and evacuation from many exotic places of friendly armies I take a certain satisfaction at signs now manifesting themselves that hostile powers too are being compelled to pull back from later colonial acquisitions. The withdrawal from their empires is under way as a kind of peace breaks out in several parts of the world.

There is poignancy in the fact that the comportment of defeated soldiers is uni- versal no matter in what cause they have fought and lost. I noticed this especially when observing film pictures and stills of the Vietnamese army staging a rather public march out of Cambodia. Within living memory they were the conquerors, first of the French professional army which fought long and hard in Indo-China, and then of the Americans. Defeated French paratroops and the Foreign Legion mar- ched boldly out from the ruins of south- east Asia in the same style and went on to fight and lose again in Algeria. Now Vietnamese victors are being forced to quit territory where their political masters had told them they were in action for the good of their country. Nobody wins all the time.

Quite a lot is to be learned about the military psychology of defeated troops by examining the look of those Vietnamese on departure parade. They were smartly dres- sed and flag flying, glum though demob- happy, in order to make the shamefaced point, as all soldiers do, that they had not really been beaten, just forced to leave because of political goings-on back home of which they knew little. To reinforce the point, they all wore Number One uni- forms, obviously considered by their Generals to be the very mirror of interna- tional military chic. Rather cosmopolitan martial gear it was, incorporating blousons for the men; and American service dress tunics for the officers, worn with very British Sam Browne belts as an imaginative accessory. A jarring note was struck by the Western peaked caps, none of which appeared to fit, as though they were a job lot from a war surplus shop.

To shore up their self-esteem the milit- ary frequently put themselves into the uniform of the enemy before last. Some- how it affords the kind of protection which actors get from putting on make up. Yet these men, we were all educated to believe in the Sixties, were troopers of the irresisti- ble irregular people's army which defeated great Western armies. Your actual brave little mountain fighters, no less, ready to conquer for Uncle Ho on a modest diet of rice eked out with large dollops of Marx- ism.

But when the war in Vietnam finally ended the bike and rifle fighters at once got down to serious regular soldiering, chuck- ed away their boring native pyjamas which so impressed Jane Fonda at the time and got measured up for proper uniforms with medals, badges and gold braid.

Alas, such are the glories and sufferings of the vie militaire that hardly was this done before they had to go off invading Cambodia as it turned out. There they found themselves up against Khmer Rouge guerrillas, much the same kind of dirty fighters that they had formerly been them- selves, only nastier and sneakier. Like those Americans brought up in the tradi- tion that they were ineluctably the good guys in frontier clothes shooting down the British redcoats, they were amazed to find that they had themselves become targets in uniform. That probably explains why they sustained 55,000 casualties and finally had to withdraw. Going formal is just one of the perils in the soldiering game.

That truth has been learned again by the new generation of professional British soldiers typified by the SAS and the SBS. Like all British army units used to clashing with underground fighters they will, given half a chance, form themselves into small private teams or cells. When they go in for serious business they imitate the guerrilla.

There is the military paradox. As busily as the great irregular armies of our time, — the Vietnamese, the Algerians — con- verted themselves into smartly uniformed regular forces, the standing armies of Europe were forming special units which chose to throw away their badges of rank and Number One uniforms in order to dress and fight like the enemy. Inside every guardsman is a frantic little guerrilla strug- gling to get out.

A comparable change took place in the Russian army when it first went to fight in Afghanistan and the speznaz were created. The Red Army also changed its uniform to suit psycho-military circumstance, putting its men into imperial headgear reminiscent of Baden-Powell and the old days of the Indian Army. Simultaneously the Afghan guerrillas, as their weapons improved, began to abandon tribal gear and wear instead khaki combat kit invented in the West. The stages of any colonial war are recorded in changes of fashion in army uniforms.

From defeat on the ground in Afghanis- tan the Russian army in the end managed to snatch the propaganda victory. Its public relations commanders succeeded in divert- ing domestic attention from the hastily abandoned bases cluttered with millions of roubles worth of vehicles, ammunition and stores.

More surprisingly they also succeeded at least in fooling Western public opinion with their Potemkin retreat. The trick was to fascinate us all with the highly publicised 250-mile march to safety through the mountains of such units as the First Moto- rised Infantry Brigade, the most photo- graphed, filmed and interviewed unit in the entire Soviet army. This smartly turned out unit composed pictorially of nice looking young Russians in bush hats and medals appeared as if it had been recruited by a cinema casting agency. Could these bronzed soldiers be the same brutal invad- ers who used every knavish trick in the military handbook yet failed in their attempts to blast out the Pathan guerrillas and suffered for it? They were decorated with garlands like a liberating army, so why were they leaving? Pictures of abandoned war material and triumphant Afghan fight- ers only came later.

As the long retreat began there was no mention of casualty lists. Only after the first successful barrage of disinformation lifted did a Moscow spokesman admit that since the invasion began in December 1979 up to 15,000 Russian soldiers had been killed in action. And that figure itself is an understatement. Some estimates go as high as 40,000, a casualty rate which no demo- cratic country could accept in a small war.

The truth is that a Soviet imperial army thrown in to establish a communist regime had been put to shame by determined guerrilla armies fighting for Allah and country, as capitalist armies had been before them. In this colonial war fought out on the edge of the vast Russian empire Soviet forces have suffered a blow to their self-esteem comparable with that inflicted on the Americans in Vietnam. The differ- ence is that the United States, famous for its public relations skills, totally failed to use them to make its withdrawal from Saigon anything look like anything but a ragged defeat.

Military stage management and media control by the Russians has almost per- suaded the outside world that the thousands of troops who retreated from Kabul and other areas they could no longer comfortably hold are somehow 'our boys' too, holding off the barbarian hordes. They are not, they are the soldiers of an aggressive power which failed in a nasty little war. Yet physically and even psycho- logically they do resemble our soldiers. The expressions on their faces are quite like those of, for example, British soldiers as they were evacuated thumbs up and wearily smiling from the beachhead at Port Said after the disastrous Suez expedition, — not defeated, you see, but betrayed by politicians.

A careful look at the Soviet (and I begin to think of them as Russian rather than Soviet) troops falling so publicly back to their own borders showed that the majority were European Russians, Muscovites, Ukrainians and Baits. Soldiers from the Soviet Republics of the Asian steps were rare as black soldiers in the Brigade of Guards. Over the eight years the war has lasted the army command showed no enthusiasm for using Asian Soviet soldiers in great numbers, just in case they caught the Islamic virus from the co-religionist enemy.

Nor is their departure the end of the affair. What must worry them most at this . stage is not the future of Afghanistan but the effect that a notable setback to com- munism by the forces of Islam may ulti- mately have upon the Islamic states of the Soviet Union to the North. Already there are stirrings of Muslim militancy in neigh- bouring Tadjikistan and Uzbekistan. The KGB keeps a watchful eye on over zealous mullahs in these areas. For knowledge that their brethren in Afghanistan have trium- phed might encourage others to make holy small war. It is too soon to forecast what may be the effect in those areas of the end of the Gulf war. Already the Iranians are taking ever more interest in Afghan affairs and quite likely want to proselytise for the Shiite branch of Islam in Soviet Asia once their war with Iraq is over. In such ways does peace lead to more war. It is not beyond the bounds of possibility that the ayatollahs are even now lost in dreams of building a new Persian empire of Allah extending to Afghanistan and into Soviet Asia.

As the withdrawal from empire con- tinues, the day I look forward to is when Political circumstance forces the Cuban expeditionary forces to pull out of Angola as a result of Soviet-South African dealing. When the new mercenaries from Latin America embark for the home island in the West what will their faces register? And which centurion colonial, hardened and burnished by service under the African sun, disillusioned by other people's wars that cost the lives of his soldiers, will risk all to overthrow the rule of Fidel Castro in the imperial capital of Havana as once his French equivalents attempted to destroy the great General de Gaulle?