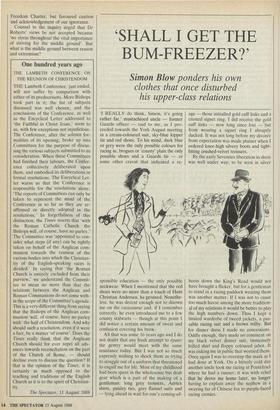 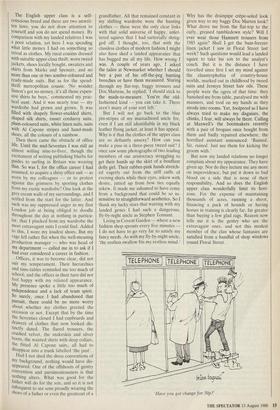 `SHALL I GET THE BUM-FREEZER?'

Simon Blow ponders his own

clothes that once disturbed his upper-class relations

'I REALLY do think, Simon, it's going rather far,' mustachioed uncle — former Guards officer — said to me, as I pro- ceeded towards the York August meeting in a cream-coloured suit, sky-blue kipper tie and red shoes. To his mind, dark blue or grey were the only possible colours for racing in, brogues or 'county' plain the only possible shoes and a Guards tie — or some other cravat that indicated a re- sponsible education — the only possible neckwear. When I mentioned that the red shoes were no more than a touch of Hans Christian Andersen, he groaned. Nonethe- less, he was decent enough not to disown me on the racecourse and, if I remember correctly, he even introduced me to a few county stalwarts — though at this point I did notice a certain amount of sweat and confusion covering his brow.

All that was some 16 years ago and I do not doubt that any fresh attempt to epater the gentry would meet with the same resistance today. But I was not so much expressly wishing to shock them as trying to struggle out of a uniform that threatened to engulf me for life. Most of my childhood had been spent in the wholesome but drab gear which is a part of the making of a gentleman: long grey trousers, Aertex shirts, paisley ties, grey flannel suits and — lying ahead in wait for one's coming-of-

age — those initialled gold cuff links and a crested signet ring. I did receive the gold cuff links — now long since lost — but from wearing a signet ring I abruptly ducked. It was not long before my divorce from expectation was made plainer when I ordered knee-high silvery boots and tight- fitting crushed-velvet trousers.

By the early Seventies liberation in dress was well under way; to be seen in silver

boots down the King's Road would not have brought a flicker, but for a gentleman to stand in a racing paddock wearing them was another matter. If I was not to cause too much havoc among the more tradition- al of my relations it would be better to play the high numbers down. Thus I kept a limited wardrobe of tweed jackets, a pas- sable racing suit and a brown trilby. But for dinner dress I made no concessions. Oddly enough, they made no comment on my black velvet dinner suit, immensely frilled shirt and floppy coloured jabot. It was risking me in public that worried them. Once again I was to overstep the mark as I had done at York. On a bitterly cold day another uncle took me racing at Pontefract where he had a runner; it was with relief that he drove me home later, no longer having to explain away the nephew in a swaying fur of Chinese fox to purple-faced racing cronies.

The English upper class is a self- conscious breed and there are two unwrit- ten laws: you do not draw attention to

yourself and you do not spend money. By comparison with my landed relatives I was

a poor relation, yet here I was spending what little money I had on something so trivial as clothes. My rural cousins dressed with suitable upper-class thrift: worn tweed jackets, shoes locally bought, sweaters and shirts from Marks and Spencer, and no more than one or two sombre-coloured and ready-made suits. But as for the spend- thrift metropolitan cousin: 'No wonder Simon's got no money, it's all those expen- sive shirts he buys,' commented my prac- tical aunt. And it was nearly true — my wardrobe had grown and grown. It was filled with shapely flower-studded shirts, shaped silk shirts, russet corduroy suits, Plum-coloured suits, white linen suits, suits with Al Capone stripes and hand-made shoes, all the colours of a rainbow.

Then there came the obstacle of office life. Until the mid-Seventies I was still an almost willing nine-to-fiver, though the excitement of writing publishing blurbs for guides to surfing in Britain was wearing thin. So was I, for the office career I had assumed, to acquire a shiny office suit — as worn by my colleagues — or to protest against this grimness by sporting clothes from my exotic wardrobe? One look at the grey cream walls of my surroundings, and I settled from the start for the latter. And such was my suppressed anger in my first London job at being obliged to doodle throughout the day at nothing in particu- lar, that I plucked from my wardrobe the most extravagant suits I could find. Added to this, I wore my loudest shoes. But my rage fell rather flat when the well-meaning , production manager — who was head of my department — called me in to ask if I had ever considered a career in fashion.

Offices, it was to become clear, did not suit my temperament. Their hierarchies and time-tables reminded me too much of school; and the offices in their turn did not feel happy with my relaxed appearance. My presence spoke a little too much of independence and a lack of team spirit. So surely, once I had abandoned that pursuit, there could be no more worry about whether my clothes greeted the occasion or not. Except that by the time the Seventies closed I had cupboards and drawers of clothes that now looked dis- tinctly dated. The flared trousers, the crushed velvet, the snakeskin and silver boots, the waisted shirts with deep collars, the fitted Al Capone suits, all had to disappear into a trunk labelled 'the past'. Had I not shed the dress conventions of my background, nothing would have dis- appeared. One of the offshoots of gentry convention and parsimoniousness is that nothing alters. What was good for the father will do for the son, and so it is not Infrequent to see sons proudly wearing the shoes of a father or even the greatcoat of a grandfather. All that remained constant in my shifting wardrobe were the hunting clothes — these were the only clear links with that solid universe of happy, unlet- tered squires that I had sartorially shrug- ged off. I thought, too, that with the classless clothes of modern fashion I might also have shed a landed appearance that has bugged me all my life. How wrong I was. A couple of years ago, I asked the tailor at Newmarket whether I should buy a pair of his off-the-peg hunting breeches or have them measured. Staring through my flat-top, baggy trousers and Doc Martens, he replied: 'I should stick to the made-to-measure. You're the old- fashioned kind — you can take it. There aren't many of your sort left.'

But I will not go back to the blue pin-stripes of my mustachioed uncle for, even if I am still identifiable in my black leather flying jacket, at least it has appeal. Why is it that the clothes of the upper class are so defiantly unsexy? How can you make a pass in a three-piece tweed suit? I once saw some photographs of two leading members of our aristocracy struggling to get their hands up the skirt of a bouffant dolly girl. Their rubber-pink hands stretch- ed eagerly out from the stiff cuffs of evening shirts while their eyes, askew with desire, jutted up from bow ties equally askew. It made me ashamed to have come from a background that could be so in- sensitive to straightforward aesthetics. So I thank my lucky stars that warring with my landed genes I had such a dangerous, fly-by-night uncle as Stephen Tennant.

Living in Covent Garden — where a new fashion shop sprouts every five minutes I do not have to go very far to satisfy my fancy needs. As with my fly-by-night uncle, `the restless swallow fits my restless mind.'

Why has the drainpipe crêpe-soled look given way to my baggy Doc Marten look? What drove me from the flat-top to the curly, greased tumbledown style? Will I ever wear those Hamnett trousers from 1985 again? Shall I get the bum-freezer linen jacket I saw in Floral Street last. week? Such questions would lead a landed squire to take his son to the analyst's couch. But it is the distance I have travelled since first I set my mind against the claustrophobia of country-house worlds, marked out in childhood by tweed suits and Jermyn Street hair oils. These people were the ogres of that time: they banished me from table, paralysed me with manners, and trod on my hands as they strode into rooms. Yet, foolproof as I have always tried to make my disguises, the chinks, I fear, will always be there. Calling at Maxwell's the bootmakers recently with a pair of brogues once bought from them and badly repaired elsewhere, the horrified assistant announced: 'Ruined, Sir, ruined. Just use them for kicking the groom with.'

But now my landed relations no longer complain about my appearance. They have given up. Nor do they lecture me any more on improvidence, but put it down to bad blood on a side that is none of their responsibility. And so does the English upper class wonderfully limit its hori- zons. For the expense of maintaining thousands of acres, running a shoot, financing a pack of hounds or having horses in training is clearly far, far greater than buying a few glad rags. Reason now tells me it is the gentry who are the extravagant ones, and not this modest member of the clan whose fantasies are satisfied from a handful of shop windows round Floral Street.