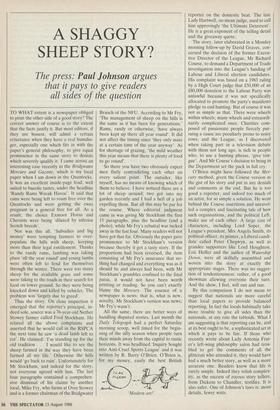 that it pays to give readers all sides of the question

TO WHAT extent is a newspaper obliged to print the other side of a good story? The correct answer of course is to the extent that the facts justify it. But most editors, if they are honest, will admit a certain reluctance when they have a real humdin- ger, especially one which fits in with the paper's general philosophy, to give equal prominence in the same story to denials which severely qualify it. I came across an interesting case recently in the Bridgwater Mercury and Gazette, which is my local paper when I am down in the Quantocks. It was an excellent inside-page lead, well suited to bucolic tastes, under the headline 'Randy Rams Wreak Havoc'. It said that rams were being left to roam free over the Quantocks and were getting the ewes pregnant in a general free for all. As a result, the choice Exmoor Horns and Cheviots were being 'diluted by inferior Scotch breeds'.

Nor was this all. 'Subsidies and big money' were tempting farmers to over- populate the hills with sheep, keeping more than their legal entitlement. Thanks to the randy rams, lambing was taking place 'all the year round' and young lambs were often left to fend for themselves through the winter. There were too many sheep for the available grass and some were taking to the roads in their search for food on lower ground. So they were being knocked down and killed by vehicles. The problem was 'largely due to greed'.

Thus the story. On close inspection it emerged that the reporter's principal, in- deed sole, source was a 76-year-old Nether Stowey farmer called Fred Stockham. He related all the above complaints and asserted that he would call in the RSPCA the next time he saw 'a dead lamb left to rot'. He claimed: `I'm standing up for the old tradition . . . I would like to see the sheep farmed in the way they have been farmed all my life.' Otherwise the hills would 'go back to ruin'. Unfortunately for Mr Stockham, and indeed for the story, not everyone agreed with him. The last four paragraphs contained a comprehen- sive dismissal of his claims by another local, Mike Fry, who farms at Over Stowey and is a former chairman of the Bridgwater Branch of the NFU. According to Mr Fry, 'The management of sheep on the hills is the same as it has been for generations.' Rams, randy or otherwise, 'have always been kept up there all year round'. It did not affect the timing since 'they only mate at a certain time of the year anyway'. As for shortage of grazing, 'the mild weather this year means that there is plenty of food to go round'.

So there you have two obviously expert men flatly contradicting each other on every salient point. The outsider, like myself, has no means of knowing which of them to believe. I have noticed there are a lot of sheep around; two got into my garden recently and I had a hell of a job expelling them. But all this may be par for the course. Where editorial judgment came in was giving Mr Stockham the first 15 paragraphs, plus the headline (and a photo), while Mr Fry's rebuttal was tucked away in the last four. Many readers will not have got that far. Obviously the paper gave prominence to Mr Stockham's version because thereby it got a tasty story. If the proportions had been reversed, the item consisting of Mr Fry's assurance that no- thing had changed and everything was as it should be and always had been, with Mr Stockham's grumbles confined to the final paras, it would not have been worth printing or reading. So you can't exactly blame the Mercury. The essence of a newspaper is news: that is, what is new, novelty. Mr Stockham's version was news; Mr Fry's wasn't.

All the same, there are better ways of handling disputed stories. Last month the Daily Telegraph had a perfect Saturday morning scoop, well timed for the begin- ning of the silly season when people turn their minds away from the capital to rustic horizons. It was headlined 'Inquiry Sought into Anti-Cruel Sports League' and it was written by R. Barry O'Brien. O'Brien is, for my money, easily the best British

reporter on the domestic beat. The late Lady Hartwell, no mean judge, used to call him approvingly 'the Ultimate Deterrent'. He is a great exponent of the telling detail and the giveaway quote.

The story, later elaborated in a Monday morning follow-up by David Graves, con- cerned the decision of the former Execu- tive Director of the League, Mr Richard Course, to demand a Department of Trade investigation into the League's funding of Labour and Liberal election candidates. His complaint was based on a 1983 ruling by a High Court judge that £50,000 of an £80,000 donation to the Labour Party was unlawful because it was not specifically allocated to promote the party's manifesto pledge to end hunting. But of course it was not as simple as that. There were wheels within wheels; many wheels and extraordi- narily complicated ones. Charities com- posed of passionate people fiercely pur- suing a cause are peculiarly prone to noisy rows; and the League, as I discovered when taking part in a television debate with them not long ago, is rich in people who, to use a hunting phrase, 'give ton- gue'. And Mr Course's decision to bring in the Department set the pack in full cry.

O'Brien might have followed the Mer- cury method, given the Course version as the gist of his story and put in any denials and comments at the end. But he is too good a reporter, and indeed too much of an artist, for so simple a solution. He went behind the Course assertions and unravel- led a complex and fascinating tale of how such organisations, and the political Left, make use of each other. A large cast of characters, including Lord Soper, the League's president, Mrs Angela Smith, its political officer, its printer, a Liberal candi- date called Peter Chegwyn, as well as grandee supporters like Lord Houghton, Eric Heffer and the author of Watership Down, were all skilfully assembled and woven into the story at exactly the appropriate stages. There was no sugges- tion of tendentiousness: rather, of a good showman allowing everyone their turn. And the show, I feel, will run and run.

By this comparison I do not mean to suggest that nationals are more careful than local papers to provide balanced reporting. In fact the locals habitually take more trouble to give all sides than the nationals, at any rate the tabloids. What I am suggesting is that reporting can be; and at its best ought to be, a sophisticated art in which it pays to be fair. If those who recently wrote about Lady Antonia Fras- er's left-wing philosophy salon had trou- bled to get the comments of all the glitterati who attended it, they would have had a much better story, as well as a more accurate one. Readers know that life is rarely simple. Indeed they relish complex- ity, as the success of rococo story tellers, from Dickens to Chandler, testifies. It is also safer. One of Johnson's laws is: more details, fewer writs.