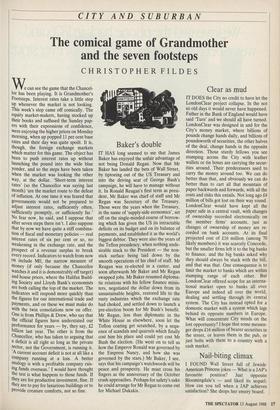 IT DOES the City no credit to have let the LondonClear project collapse. In the not so old days it would never have happened. Father in the Bank of England would have said 'Turn' and we should all have turned. LondonClear was designed in and for the City's money market, where billions of pounds change hands daily, and billions of poundsworth of securities, the other halves of the deal, change hands in the opposite direction. Those sturdy fellows you see stumping across the City with leather wallets or tin boxes are carrying the secur- ities around. Their predecessors used to carry the money around too. We can do better than that, and obviously we can do better than to cart all that mountain of paper backwards and forwards, with all the costs and risks this entails. Not long ago £4 million of bills got lost on their way round. LondonClear would have kept all the paper safe in a central vault, with changes of ownership recorded electronically on the member firms' accounts, just as changes of ownership of money are re- corded on bank accounts. At its final projected cost of £16 million (among 70 likely members) it was scarcely Concorde, but the smaller firms left it to the big banks to finance, and the big banks asked why they should always be stuck with the bill, and that was that. One consequence is to limit the market to banks which are within stumping range of each other. But LondonClear offered scope for an interna- tional market open to banks all over Europe and indeed all over the world, dealing and settling through its central system. The City has instead opted for a domestic market with a system which lags behind its opposite numbers in Europe. What will concentrate City minds on the lost opportunity? I hope that some messen- ger drops £16 million of bearer securities in the street, or leaves them in the pub, or just bolts with them to a country with a cash market.