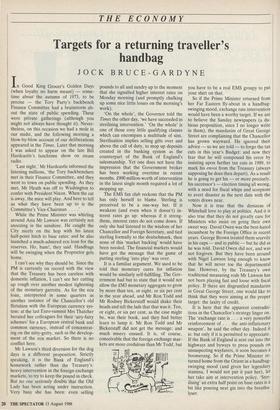 Targets for a returning traveller's handbag

'Last night,' Mr Hardcastle informed the listening millions, 'the Tory backbenchers met in their Finance Committee, and they went to town on public spending. As they met, Mr Heath was off to Washington to confer with President Nixon. When the cat is away, the mice will play. And here to tell us what they have been up to is the Committee's Vice-Chairman . . . .'

While the Prime Minister was whirling around Asia Mr Lawson was certainly not snoozing in the sunshine. He caught the City nicely on the hop with his latest half-point hitch to base rates: and he also launched a much-admired ecu loan for the reserves. Ho, hum!, they said. Handbags will be swinging when the Proprietor gets home.

I can't see why they should be. Since the PM is currently on record with the view that the Treasury has been careless with domestic inflation, I can't see her cutting up rough over another modest tightening of the monetary garrotte. As for the ecu loan, interpreted in some quarters as another instance of the Chancellor's old flirtation with the European currency sys- tem: at the last Euro-summit Mrs Thatcher berated her colleagues for their 'airy-fairy schemes' for a European central bank and common currency, instead of concentrat- ing on the nitty-gritty, such as the develop- ment of the ecu market. So there is no conflict here.

Mr Lawson's third diversion for the dog days is a different proposition. Strictly speaking, it is the Bank of England's homework rather than the Treasury's: heavy intervention in the foreign exchange markets, to try to keep the pound in check. But no one seriously doubts that the Old Lady has been acting under instruction. Very busy she has been: even selling pounds to all and sundry up to the moment that she signalled higher interest rates on Monday morning (and promptly chalking up some nice little losses on the morning's work).

`On the whole', the Governor told the Times the other day, 'we have succeeded in sterilising intervention.' On the whole' is one of those cosy little qualifying clauses which can encompass a multitude of sins. Sterilisation implies selling gilts over and above the call of duty, to mop up deposits created in the banking system as the counterpart of the Bank of England's salesmanship. Yet one does not have the impression that the Government broker has been working overtime in recent months. £900 million-worth of intervention in the latest single month required a lot of mopping up.

The EMS fan club reckons that the PM has only herself to blame. Sterling is perceived to be a one-way bet. If it weakens (and even when it doesn't) in- terest rates go up: whereas if it streng- thens, interest rates do not come down. If only she had listened to the wisdom of her Chancellor and Foreign Secretary, and tied sterling formally to the deutschmark, then none of this 'market bucking' would have been needed. The financial markets would have got the message that the game of putting sterling 'into play' was over.

It is a familiar argument. We used to be told that monetary cures for inflation would be similarly self-fulfilling. The Gov- ernment had but to state that it would not allow the £M3 monetary aggregate to grow by more than ten, or eight, or six per cent in the year ahead, and Mr Ron Todd and Mr Rodney Bickerstaff would shake their heads and tell the lads that that was it. Ten, or eight, or six per cent, as the case might be, was their book, and they had better learn to lump it. Mr Ron Todd and Mr Bickerstaff did not get the message: and much misery ensued. It is, of course, conceivable that the foreign exchange mar- kets are more credulous than Mr Todd, but

you have to be a real EMS groupy to put your shirt on that.

So if the Prime Minister returned from her Far Eastern fly-about in a handbag- swinging mood, exchange rate intervention would have been a worthy target. If we are to believe the Sunday newspapers (a du- bious proposition, since I no longer write in them), the mandarins of Great George Street are complaining that the Chancellor has grown wayward. He ignored their advice — so we are told — to forgo the tax cuts in this year's Budget: and now they fear that he will compound his error by insisting upon further tax cuts in 1989, to mark his envoi from the Treasury (always supposing he does then depart). As a result he is going to get his — or more precisely, his successor's — election timing all wrong, with a need for fiscal whips and scorpions to avert disaster as the next date with the voters draws near.

Now it is true that the denizens of Whitehall love to play at politics. And it is also true that they do not greatly care for Ministers who insist on going their own sweet way. David Owen was the best-hated incumbent by the Foreign Office in recent years. George Brown treated them scurvily in his cups — and in public — but he did as he was told. David Owen did not, and was not forgiven. But they have been around with Nigel Lawson long enough to know that he will never toe the departmental line. However, by the Treasury's own traditional measuring rods Mr Lawson has not been playing fast and loose with fiscal policy. If there are disgruntled mandarins in Great George Street, one would like to think that they were aiming at the proper target: the laxity of credit.

It is here that the apparent contradic- tions in the Chancellor's strategy linger on. The 'exchange rate is . . . a very powerful reinforcement of . . . the anti-inflationary weapon', he said the other day. Indeed it is: but only if it is permitted to appreciate. If the Bank of England is sent out into the highways and byways to press pounds on unsuspecting wayfarers, it soon becomes a boomerang. So if the Prime Minister re- turned home from the Orient in a handbag- swinging mood (and given her legendary stamina, I would not put it past her), let her take aim at intervention policy. 'Ster- ilising' an extra half point on base rates is a bit like pouring neat gin into the breatha- lyser.